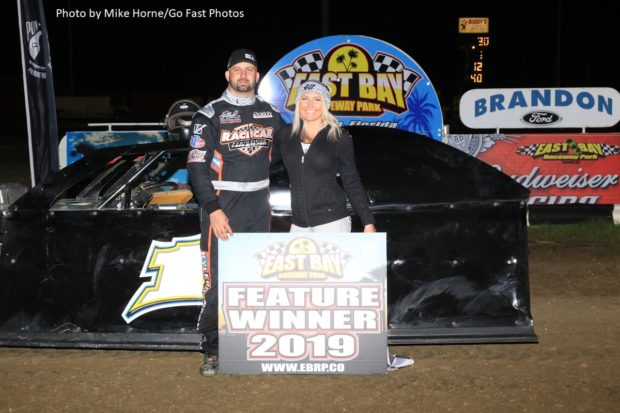 GIBSONTON, FL – Kyle Bronson backed up his Thursday night victory with a win in the 30-lap Modified main on Friday in night number 3 of the Winternationals. Bronson used the bottom of the track to make his passes as he charged past Lucas Lee to gain control late in the race.

The event started slowly with a trio of caution flags flying before the second lap could be completed. From there, a non-stop period of green flag racing sent the field completely around the race track with position battles galore. Dale Kelley held the early lead, but veteran Roger Crouse capitalized on a strong run off turn two to assume the position. Lucas Lee would be the next to step up and grab the top spot. Bronson stayed down low to ease past Lee, but the Tennessee racer who finished in the top 10 in the UMP National championship chase, was not done. He challenged Bronson until the leader was able to squeeze by a lapped car, leaving Lee behind.

Bronson’s second win clinched the point lead over the three days of competition. The top six in points will find themselves on the receiving end of an automatic spot in the 75-lap Saturday A main. Joining Bronson will be Wednesday feature winner Bryan Bernhardt, Friday fast qualifier Kevin Adams, Ivedent Lloyd Jr., Devin Dixon and Jeff Mathews.

Rocketman Richie Stephens backed up his Thursday victory in Street Stock action by capturing the 20-lap feature. Stephens got the lead early and never looked back, despite the challenges of Thomas Pratt, who came through for second. Pratt and Stephens had earlier won the heat races.


Week one of the 43rd annual Winternationals will wrap up on Saturday with the final features of the week. The following week, Stingray Performance Crate Late Models, Top Gun Sprints and V-8 Warriors/Thunderstocks will hold three nights of racing, starting on Jan. 31.