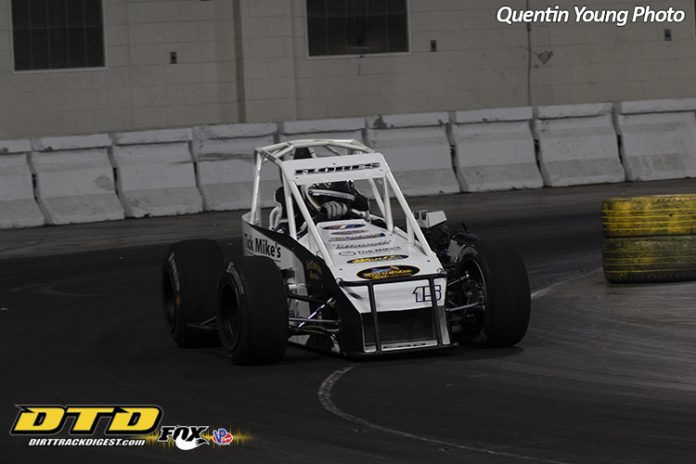 The four winners each had their challenges before winning the Indoor Auto Racing Series Fueled By VP Race Fuels Friday races.

Janisch’s win in the first race came after he survived a tangle with leader Kyle Reinhardt. Joey Bailey ended up second.

“We didn’t run that well and have some speed to find,” Janisch said. “Being locked in for tomorrow is a great advantage.”

Flores emerged from a mid-race half-spin on a track slickened by leakage from a rival’s car that took out contender Jeremy Haudricourt, who, unlike Flores couldn’t save his car. Earl Paules finished second.

Flores alluded to the spin and win. “I got kind of lucky there, we’ll take it,” Flores said. “The track has been challenging, different. But it’s the same for everybody else.”

Jankowiak’s unusually conservative driving in the third heat resulted in victory when he flew by Kyle Lick and John Ivy for the win with Ivy holding for second.

“This is my first press conference, and it’s pretty cool,” Jankowiak said. “I kept changing setups in practice, and they were all good. I’m in a good place right now.”

Catalano and Briggs Danner ran bumper to bumper for half the race before getting together. Catalano half spun and kept going, Danner spun and brought out the yellow flag. Justin Bonsignore was the opportunist, finishing second.

“By not time trialing well we started up front in the heat and that proved to be a break for us,” Catalano said. “We were fighting the track and shot from the hip and it worked.”

The race, conceived by Dr. Lowe to reward drivers who had not qualified for either of the two Allentown Indoor races earlier this month, conveyed to Cabral a starting spot in the Gambler’s Classic Saturday.

In Slingshot heat race action, Dan Morgiewicz, Jr., Al Gerhart and Alex Tardiff won the three events. Tom Hennessey and Chris Predmore climbed out of their wrecked Slingshots, with assistance, after slamming into the fence.

In Friday afternoon qualifying, 61 TQ Midgets took time with Erick Rudolph setting quickest over Anthony Sesely. Rudolph was 52nd to take time, Sesely tenth to post, a testament to the well prepared and consistent racing surface. Andy Jankowiak, third fastest, was 34th in the time trial order while Justin Bonsignore, fourth on the clock, took to the track 13th in the running order.

Forty-four Slingshot drivers took their shots at the clock and forty-two Champ Kart racers did the same.

Saturday, spectator gates to Boardwalk Hall open at 5:00 PM with Fanfest, a meet-and-greet session for premium ticket holders, on the track preceding the races.

Saturday racing begins at 7:00 PM with TQ Midget Champ Kart and Slingshot qualifying races leading up to a 20-lap Champ Kart main event and a Slingshot feature of the same distance.

The climactic race of the Indoor Auto Racing Series Fueled By VP Race Fuels NAPA KNOW HOW Weekend is the 17th running of the Gambler’s Classic over a 40-lap distance. Ryan Flores is the defending champion of the race.

Once the checkered flag falls to end the Gambler’s Classic, the Indoor Auto Racing Series moves to upstate New York over the weekend of March 8-9, 2019 for the first running of indoor racing inside the New York State Exposition Center in Syracuse, NY. TQ Midgets, Champ Karts and Slingshots will be featured and Indoor Auto Racing Series Fueled By VP Race Fuels champions will be crowned in all three classes.