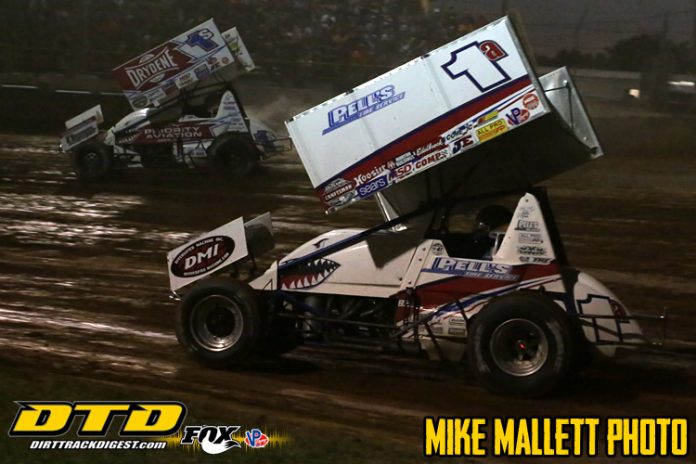 CONCORD, NC – Five years ago, Bobby Allen decided it was time. It was time to bring his then 22-year-old grandson Logan Schuchart and 19-year-old son Jacob Allen on the road full-time with the World of Outlaws NOS® Energy Drink Sprint Car Series. He knew that if he wanted them to make a living in this sport, they had to be on the World of Outlaws tour.

When the news began circulating that Schuchart and Allen were following the most grueling schedule in all of motorsports, many people, including Schuchart himself, were surprised. “I said to myself, I think [Bobby] is pretty serious about this. We weren’t prepared and it’s amazing we made it. The first few years were about surviving and making it to November,” Schuchart said.

Jacob Allen, who made just a handful of 410 starts before joining the Series full-time, agreed, “The idea of us living on the road full-time and running with the World of Outlaws got thrown at us in the winter in 2013. I definitely didn’t know how to drive or work on the cars and I had no idea what to expect.”

The results weren’t flattering that first season in 2014, and as Schuchart said, the goal was simply to survive. The learning curve was harsh, especially for Allen, who scored one top-10 finish during the 2014 campaign. In comparison, the top three in the 2014 Point Standings each had more than 75 top-10 finishes that year. Schuchart, the older and more experienced of the duo, amassed 15 top-10 finishes his rookie season.

The duo improved in year two with Allen recording a pair of top-10 finishes, while Schuchart began knocking on the door of that first career World of Outlaws triumph.


In 2016, Schuchart finally broke through with his first win at Cedar Lake Speedway, an emotional and unforgettable night for everyone involved with Shark Racing. Schuchart added another win in his home state of Pennsylvania at Port Royal Speedway to go along with 39 top-ten finishes and an 8th-place finish in the Series Points Standings. Schuchart had taken a significant step forward, catching the attention of the Sprint Car racing world leading to heightened expectations in 2017.

Schuchart exceeded those expectations, doubling his career win total, including marquee victories at The Dirt Track at Charlotte and Eldora Speedway.

“I think part of it was an attitude change on my end,” Schuchart said in regard to his improvement. “When I first started out here, I didn’t really know what to do. I looked at guys like Schatz and Saldana in the sense of ‘these guys were my heroes growing up’ and not as competitors.”

On the contrary, Allen’s struggles continued. He was making more feature events, but still only totaled three top-10 finishes all season.

As 2018 began — marking Shark Racing’s fifth year on the road — the team established itself as a fixture on the road. Despite more than 20 rainouts, the tandem continued to climb the ladder within The Greatest Show on Dirt. Schuchart flexed his muscle dominating the Ironman 55, scoring the $20,000 payday and the following week earned his first career Knoxville Raceway win during the prestigious Nationals. He closed the campaign with a triumph at Fulton Speedway and a thrilling performance in the World Finals at The Dirt Track at Charlotte, reaching a career high in top-five and top-ten finishes, en route to finishing a career-best sixth in the Series championship.

But the real story from the Shark Racing camp was Jacob Allen’s breakout season. Allen turned the corner in 2018 and matched his top-10 total from the previous four seasons combined, while adding nine top-five finishes, after amassing just two in his first four years.

“I saw how professional all the guys out here were and applied that to myself,” Allen said on his drastic improvement in 2018. “Being able to watch the full races on DIRTVision.com has been a great tool to use as a driver. I can watch what they do and relate it to myself.” Allen caught fire as the summer went along, scoring back-to-back podium finishes at Weedsport Speedway and Federated Auto Parts Raceway at I-55 before qualifying for his first career Knoxville Nationals A-Main. The momentum didn’t stop for Allen at the Nationals, as the Hanover, PA, native scored second-place finishes at Red River Valley Speedway and Big Sky Speedway on the Series’ trek to the West Coast.

“To succeed out here, you have to believe in yourself and believe in your team. We keep learning to get better as drivers and mechanics and our surrounded by such great partners,” Allen said last summer.

Entering 2019, the team will have a new look as their determination attracted Drydene Performance Products to come onboard and sponsor the Shark Racing team. The once “little team that could” has come a long way and none of it would be possible without Bobby Allen.

“We have come so far. From racing go-karts to 358 Sprint Cars to our first 358 win, to moving to 410s, to adding a second car for Jacob. And none of it would be possible without my Grandfather,” Schuchart said on Shark Racing’s growth.

“The fact Dad believes in us is unbelievable. He is so great and I’m really thankful to be out here traveling the country with him and Logan,” Allen said while holding back tears. “He’s giving us a great opportunity and I’m glad he’s able to do it with us, it is awesome to see how people respect my Dad.”

As for Bobby, a 30-time World of Outlaws winner, he has sincerely appreciated the help he has gotten from everyone while building up Shark Racing, “I hate when someone comes up and says here’s 50 bucks it’s not a lot. It is a lot. 10 people do that and it’s $500 and without those kinds of donations, we wouldn’t have made it this far.”

2019 will mark Shark Racing’s sixth year on the road and the future has never looked brighter for Schuchart, Allen and Shark Racing. Bobby Allen started Shark Racing with a goal, “I just want my boys to be able to race,” he said. He’s done that and more; this is just the beginning for Shark Racing.