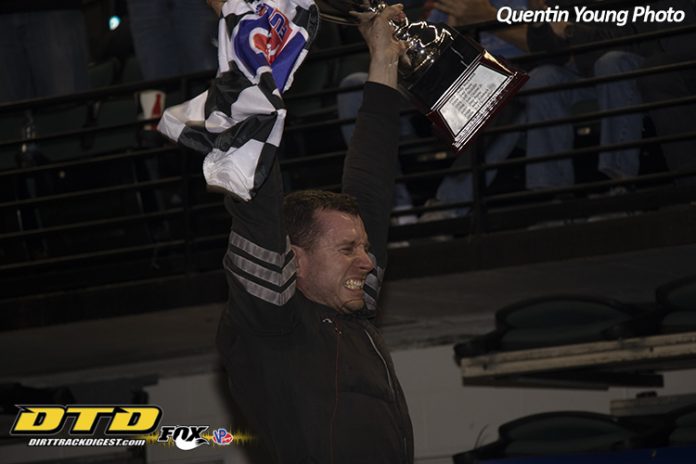 Buckwalter and Flores swapped second with Flores taking the runner-up spot from Flores for keeps nine laps from the finish. Flores held for third with Justin Bonsignore fourth and Erick Rudolph fifth.

Jankowiak earned $5,000 for the victory, then promptly donated half his winnings to Mike Tidaback and family. Tidaback suffered serious injuries in this race one year ago and was present at the track.

Danny Buccafusca raced his way to the 20-lap Slingshot victory which represented the tenth Indoor Auto Racing Series Fueled By VP Race Fuels win for car owner Randy Smith. Craig Whitmoyer, who had won an Indoor Series so on dirt in December in Trenton, NJ, was second in this one with Tyler Truex, Danny Spellmon and Nick Shaw completing the top five.

The Indoor Auto Racing Series concludes its 2018-2019 season in Syracuse, NY at the New York State Expo Center. The inaugural event takes place over the weekend of March 8-9, 2019. Series champions will be crowned at the end of the weekend for TQ Midgets, Champ Karts and Slingshots.