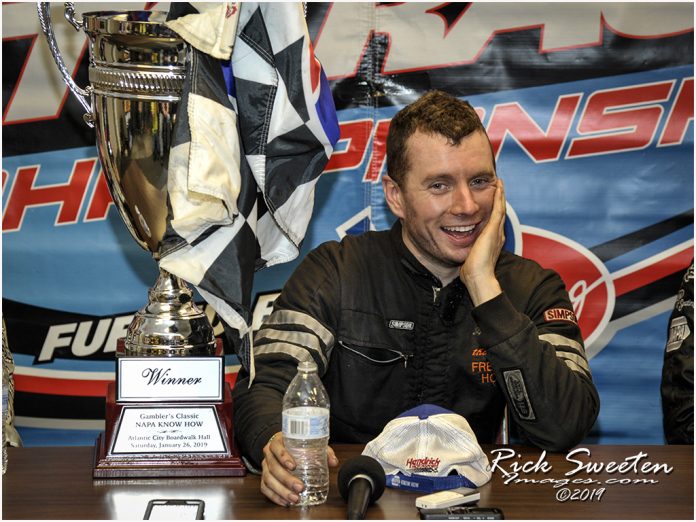 Of all indoor series events, the Gambler’s Classic continues to be the most coveted. It’s been won by some of the biggest names in racing. The late Ted Christopher, Erick Rudolph, Lou Cicconi and others have all etched their names into the record books as winners. Andy Jankowiak has been good enough to be in that company, but he just couldn’t break through.

He’s been so close on several occasions to achieving the ultimate triumph inside Atlantic City’s Boardwalk Hall in the Gambler’s Classic TQ Midget event. The pavement Modified standout has finished in the runner-up position, won multiple preliminary night features as well as winning mains at other venues. Atlantic City’s main-event has eluded him.

That was until this past Saturday night.

“This is the greatest victory of my life,” said Tonawanda, N.Y., driver. “I wanted this one so bad. This is a career changer for me. I’ve tried so hard and screwed it up so many different ways. I made myself be patient today and let everything work out. I drove myself crazy for so many years thinking about how to win this race. Every single year when I don’t I’m usually the last one to leave the building. I come in and take a lap and say next year. Last year I really believed myself. I felt it this year.”


It was a dominating performance for Jankowiak after starting on the outside of the front row. He stayed right to the rear bumper of former winner and pole-sitter Anthony Sesely right from the start.  He made his move with just six laps complete. Passing is always at premium in indoor racing, but Jankowiak was able to make short work of Sesely by crossing him over as he came off of turns one and two before making it stick in corners three and four.

“The track came in really good on the outside,” stated Jankowiak. “I got him on the bottom, but I almost got him on the outside. We were able to move up. Anthony was fast, but the 600’s don’t come off the corner quite the same. I watched him a little bit in practice and it seemed like he faded after five laps. I got behind him, I was patient and I could see he was bouncing when he got on the syrup a little bit because he was lighter with the different rule package. I was able to get underneath him. He gave me room to race. I love Anthony. We race hard, but we never have problems.”

Jankowiak knew that he had to get to the lead as quickly as possible. Once in front it was his race to lose. There are no guarantees with indoor racing as things can change in a hurry and often do. He was methodical as the race went on as he was chased by defending race winner Ryan Flores. Flores could hang with Jankowiak and he got close once only to bobble allowing Tim Buckwalter to sneak by. Buckwalter was unable to gain ground.

The win came in a car what was built by Jankowiak along with car owner Ricky Kluth with an engine built by Sparky Grape. It was motor that Jankowiak had to drive to Texas in order to get repaired after damaging the powerplant in Allentown. All of that together helped propel Jankowiak to the checkered.

“I didn’t care if I won in a wheelbarrow, I just wanted to win it,” mentioned Jankowiak. “Being involved in this deal with Ricky Kluth with Sparky Grape building the engines, it does make it more special. I started this deal racing for Trey Hoddick and he taught me so much. A lot of that went into building this car too. He’s a part of it. A lot of people love me for some reason. I’m lucky. I’m okay behind the wheel sometimes and today I was just good enough.”

Good enough indeed to call himself a Gambler’s Classic winner.