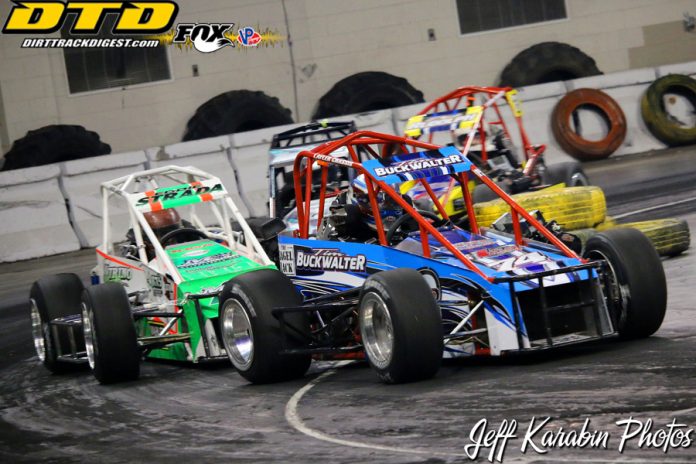 All it takes in indoor racing is one small mistake and your chances at glory are gone. You hiccup and you can go from the highest of highs to the lowest of lows. That was the case in Saturday night’s Gambler’s Classic 40-lap main-event for the TQ Midgets as Ryan Flores looked to have a shot at winning the race only to make a mistake allowing Tim Buckwalter the chance to sneak by. Buckwalter went on to finish second while Flores fell back to fourth, regrouped and made his way back up to third.

“We were good tonight,” commented Buckwalter after a career best second place finish. “I got a little free at the end. I knew I had to ride third as long as I could just to keep the inside groove. I looked up and saw 30 laps in and 10 to go and that’s when I knew I had to take my shot. We get a little rim here and there. I gave Flores a shot going into three and got underneath him to get second. Then I was just hanging on as I got real free.”

For Flores, he admitted the mistake, but there was an opening. When you have a chance in indoor racing you have to take it and he did. Unfortunately for the defending winner things didn’t play out in his favor as he was unable to complete the pass on eventual winner Andy Jankowiak.

“I made one mistake,” stated Flores. “I tried to roll the top and do a crossover there. I had to make it happen early. He was a little bit better on a long run. I just clipped his bumper and got back to fourth. I had to work some guys to get back forward. I’m really happy for Andy, he’s a true racer. He’s a lot better than a lot of these kids that just show up at the track with a helmet bag. He works his ass off to get that car together. I’ll give respect for that every day of the week. He builds his car and brings it to the race track. I’m happy for him. I wanted to win, but excited about third place and being on the podium again.”


Rudolph Races from Back to Front

Multi-time Gambler’s Classic winner and former indoor series champion Erick Rudolph had an eventful weekend. The Ransomville, N.Y., driver was forced to take a past winner’s provisional after being sent to the rear in his heat race for an incident at the start. He was unable to make his way back into a qualifying spot.

Starting 25th in the main, Rudolph picked cars off one-by-one.  Eventually he salvaged a good night with his No. 22 finishing in the fifth position while earning himself hard charger honors for his efforts.

“We came up through a little bit,” stated Rudolph. “I was able to capitalize on a few situations. At the end we had a bad restart or we might have ended up on the podium. We had tons of speed, had tons the first couple races and it sucks we haven’t gotten a win yet. If we keep being fast that is all you can do.”

It wasn’t a very good weekend for Northeast Modified and Sportsman racers. Matt Farnham, filling in for Scott Kreutter, destroyed his Trey Hoddick mount in a hard crash in Friday night qualifying.

Like Farnham, Central New York Sportsman regular Tyler Thompson took a hard lick Friday. The team made repairs allowing him to race his way into the show from his qualifying event. Unfortunately he was one of the first cars out of the race.

Marc Johnson debuted a new car over the weekend. The Guilderland, N.Y., driver got into the feature via the fastest car not locked in the A-Main. He started 24th, but like Thompson dropped out the event early…

Tidman actually got over on his side during the feature only to have safety crews put him back on all fours. He continued on in the event…