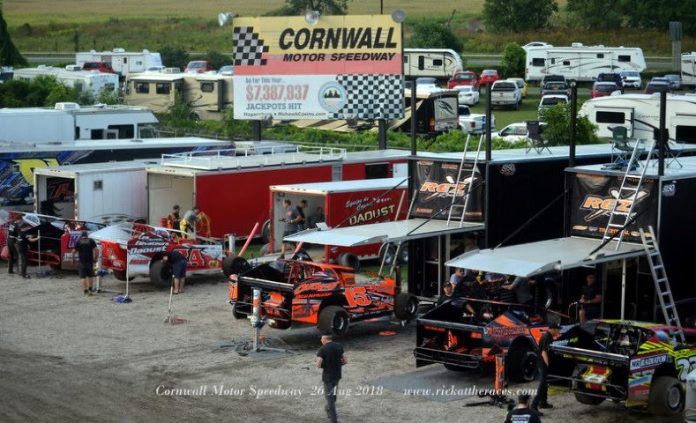 CORNWALL, ONT – Cornwall Motor Speedway put a final stamp on 2018 as over 225 guests gathered at the South Stormont Community Hall on Saturday evening to celebrate their champions of last season. This was a great opportunity to provide some news about the 2019 season which will mark the 50th anniversary of the speedway, the handicap system will be replaced by a draw system in which should attract more invaders in each class. Other great news were announced concerning the 2019 schedule, here are the details.

After consultation with race teams last year and during off season, it was decided to implement new qualifying procedure for the upcoming season, this will replace the handicap system that the speedway have been using for years. All divisions will have a nightly draw in which will determine your starting position in qualifying, heads-up format will be used, to bring consistency race officials will use a lineup chart grid to form the quantity of heats depending on amount of cars registered on that night of racing.

After heats are completed, the final car eligible in the redraw will draw an inversion number that will set the lineup for the feature. Once the eligible cars are placed, the rest of the lineup will be completed with the results from the heats. Points will still be awarded for the top 5 finishers in each heat. This new procedures will be in effect during all regular nights in each division, Series procedures would have priority when racing on a given night. The goal for this is to simplify the qualifying format and to attract new cars and give them a chance to have a good night of racing.

All major Series are returning!


Great news for our race teams and fans, DIRTcar Series were confirmed in November with the Pro-Stock Series scheduled on July 7, the 358-Modified Series on July 14 and the Sportsman Series on August 15. The Super DIRTcar Big Block Series will make their annual stop on Sunday, June 30th. The Fat Les Chip Stand Canadian Nationals Modified Series and Race for the Cure Sportsman are also on the schedule with 3 dates each.

One of the marquee events from the last 2 year, the Race for the Cure 150 that was won by Matt Sheppard last season, will be back on Thursday, August 15, we are still in finalizing the setup of this great night of racing!

Seaway GM adds to the Race for the Cure 150

After receiving the Mitch Jock Award, the Seaway GM group announced a great incentive for the Race for the Cure 150, the best local driver will receive a nice $2,000 in the 150 lap event, driver will need to compete in all events from May up to August 15.

New Fundraiser: Sisters for a cure

A new fundraiser will be added next season, the Sister for a cure 50, a 50-lap Pro-Stock event will be run on July 28, the funds collected during that evening will go to the Grace Foundation to help in research for the rare NGLY1 deficiency disease that both daughters of our regular Pro-Stock driver, Dave Seguin have.

New Series for Pro-Stock and Mini-Stock

All divisions will now have a local series to compete in 2019! The Weekend Warriors Series was added for both Pro-Stock and Mini-Stock. Each class will run 3 events in their own respective Series. The Pro-Stock will include the new Sisters for a Cure 50-lap event along with 2 other 30-lap feature race, more than $2,500 in prize will be up for grabs including tires, season pass and a car-starter. The Danny Lefebvre Memorial 25-lap Mini-Stock will be part of their Series along with two other 20-lap events, currently $1,000 in prize will be given in the Mini-Stocks.

The final schedule will be available in the coming weeks as the management are still finalizing a few great events for everyone!