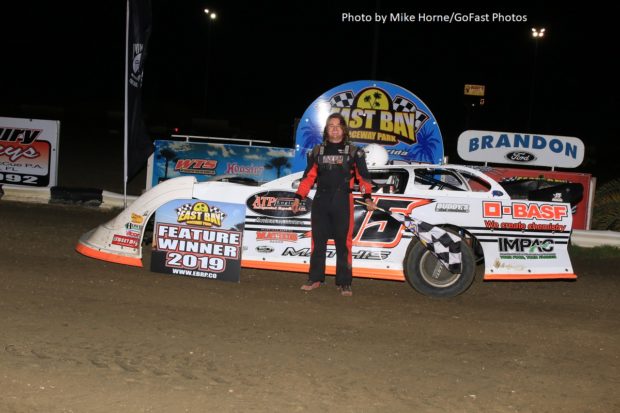 GIBSONTON, FL – The opening night of the Stingray Performance Parts Crate Late Models and Top Sprint Series brought feature wins to familiar names who have visited East Bay Raceway Park in the past. Steve Mathis Jr. prevailed in the 30-lap Crate Late Model main after a series of lead changes throughout the event. A.J. Maddox dominated the open wheel 25-lapper.

The Stingray Performance Parts Crate Late Models brought 31 cars to the pit area, but only 24 would be fortunate enough to make the feature. Fast qualifier Phillip Cobb, the only driver to record a lap below 16 seconds, drew an inversion of four in the heat races, which qualified five cars to the A. The remaining spots would come from the B main. Heats were won by Kenny Monahan, Walker Arthur, Travis Varnadore and Cobb.

Arthur, winner of a Satrday feature last year, would serve as early leader, but it didn’t take long for Monahan to jump up to the top spot. The new leader set a torrid pace, catching the back of the field by lap 7. After a lap 10 restart, Travis Varnadore blasted past Monahan in turn two to move out front. Monahan was not done, pick up the lead again a lap later. Varnadore came right back and trouble hit Monahan, who spun from second and was collected by four cars. This turn of events put fast qualifier Cobb on the back bumper of the leader. Those two were bypassed by Devin Dixon, who grabbed the lead from the high side. Dixon’s lead would be brief as Varnadore found his way back to the front. Dixon came back, but as quickly as he grabbed the lead, he lost it, this time to Keith Nosbisch. All the while, Steve Mathis Jr. was quietly gaining positions until he found himself behind Nosbisch on a lap 21 restart. While Nosbisch pulled away, Mathis was able to chip away to grab the lead in just three laps. From there, it was all Mathis to the checkered, despite late race cautions and restarts.

A field of 19 Top Gun Sprints presented for their 25-lap finale. A trio of heat races, won by Billy Bridges, Nebraska racer Tim Fricke and Keith Butler, set the lineup with the three preliminary winners at the front of the field. If any of those winners could win the feature, there would be an additional $300 in the Jeff Barfield Memorial Clean Sweep.

Bridges would be the first to be eliminated with a turn four spin and contact with Bruce Durden that saw Bridges tip over. Both cars were eliminated from competition. Butler held the early lead, but a torrid charge by A.J. Maddox was not to be denied. Once Maddox was able to lead, he was never passed again. Frank Beck was about the only one holding onto hope, but Maddox built up a seven-second lead before a lap 23 caution. When the checkered waved, only Maddox, Beck and Brandon Grubaugh were on the lead lap.