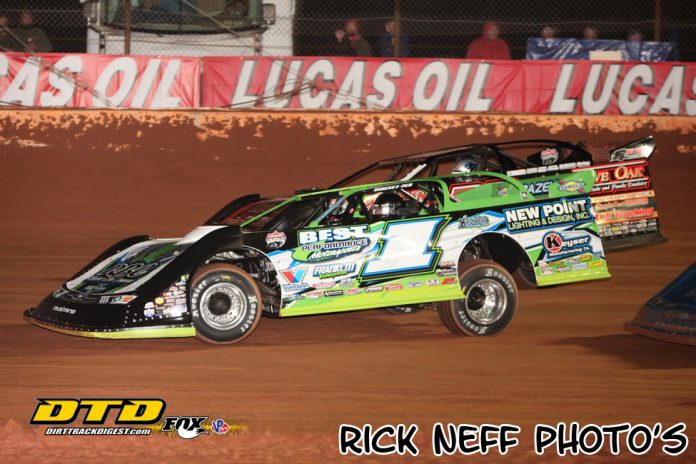 WAYNESVILLE, GA – Tyler Erb, in his debut as driver of the Best Performance Motorsports #1, made his way to victory lane in the Lucas Oil Late Model Dirt Series season opener at Golden Isles Speedway.
Erb took the lead from Hudson O’Neal on lap 13 and held the point to claim the Rhino Ag Super Bowl of Racing presented General Tire opener.
Earl Pearson Jr. tried to track down Erb in the final ten laps of the race, but settled for second in the Lucas Oil Products, Clements-powered, Black Diamond Chassis for Ronnie and Terri Stuckey. Jonathan Davenport was third in the Nutrien Ag Solutions, Longhorn for Lance Landers Motorsports.
Completing the top five were Josh Richards and Brandon Sheppard.
Hudson O’Neal, who set a new track record in qualifying on Friday night, started from the pole and led the first 12 laps of the race. O’Neal held the point until he slipped a bit in turn two allowing three drivers to get by him. O’Neal recovered and made his way back to second until he got into the turn one wall, ending his race on lap 27.
Erb then set a steady pace for the remainder of the final 23 laps. Erb encountered lap traffic with ten laps to go. Pearson cut Erb’s nearly three second lead down to just five-car lengths at the checkered flag.
Erb was ecstatic in Lucas Oil Victory Lane. “I want to thank Eric and Kelly Brock and Randall Edwards for having faith in me to drive their car. This is a great way to start the season! There is so much tough competition here. I was a little worried in traffic, but those guys gave me plenty of room to get by. It was fast today, for sure. I want to thank Wayne Childress of New Point Lighting and Design, and Billy Franklin for helping us out this year.”
Pearson, gave the winner his best shot at the end, but ran out of laps. “I figured I would have to run the top to catch him and we were. We just ran out of time and laps. I was hoping that Davenport would clean off the top for me, but overall it was a good start to the season for us and we will come back tonight and hopefully be one spot better.”
Davenport, the two-time and defending series champion, said he should have gone to the top earlier in the race. “I waited too long to get there. Once we were there the car was really good. I tried to follow Earl [Pearson] up and catch him [Erb], but he was really good today. We have had a lot of success here. Maybe tonight we can pick up the win.”
The winner’s Best Performance Motorsports, Durham-powered Rocket Chassis is sponsored by: Roberts Bee Company, New Point Lighting and Design, Bazell Race Fuels, Sunoco, Franklin Enterprises, Valvoline, Keyser, and KBC Graphix.
Completing the top ten were Don O’Neal, Scott Bloomquist, Devin Moran, Chase Junghans, and Dennis Erb Jr.
Lucas Oil Late Model Dirt Series
Race Summary
Friday and Saturday, February 1st and 2nd, 2019
Rhino Ag Super Bowl of Racing presented by General Tire
Golden Isles Speedway – Waynesville, Ga.Miller Welders Time Trials
Fast Time Group A: Hudson O’Neal / 14.864 seconds (overall)
Fast Time Group B: Brian Shirley / 14.944 seconds