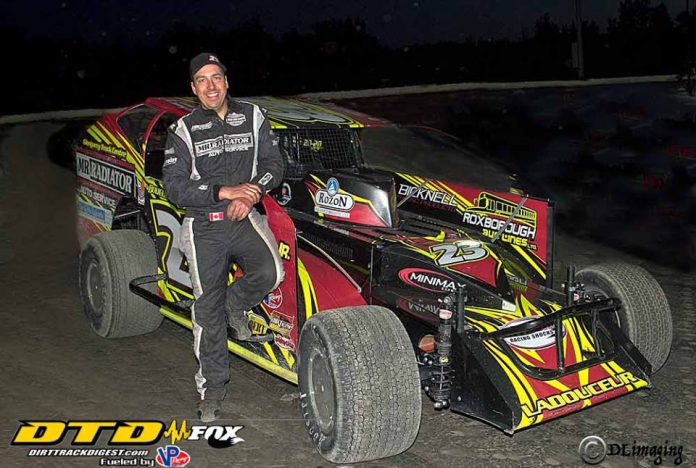 From remote control cars to 700 horsepower Sprint Cars, Lee Ladouceur has driven it all.

The younger of two sons, Lee was born into a family steeped in racing history. For many years Lee’s father, Laurent Ladouceur campaigned the number 23 Modified out of their Alexandra, Ontario, auto repair shop.

Throughout those years, Lee’s dad groomed both Lee and his older brother, Joey, into the world of motorsports as well as the automotive repair industry.

By 1997, Lee knew his way around the family shop well and wanted to test his hand at racing; he bought a 1988 Honda prelude to race in the Mini-Stock class and the rest is history.

Lee explained, “I started racing in 1997 in 4-Cylinder class with a 1988 Honda prelude three nights a week – Friday at Edelweiss, Saturday at Frog Town (Mohawk) and Sunday at Cornwall — winning three-track championships. Thirty-eight out of 42 races, I towed the car with my 1986 Mazda four-cylinder pickup.”

That season set the seed for Lee and he was bound in following his father’s footsteps.

The next season, Lee moved up to the Late Model/Pro- Stock class and would race three full seasons in this division, winning numerous races over that time until late 2000. After much discussion at the end of that season, Dave Thompson of Thompson Motorsports purchased Lee’s number 12 Pro-stock, which led the two into a partnership fielding a 358 Modified.

Dave explained, “Yes those were good old days! I bought his Pro stock after the 2001 season and then decided to help out Lee by sponsoring his Modified. Lee is a good driver, I like watching him race! When Lee and his brother showed up with their Pro stocks and win it all, it was always great to see. After taking him to Syracuse in the Pro stock car, I decided to help him out with his move into the 358 divisions by way of sponsorship.”

For the next seven seasons, Lee raced in the Modified division, primarily at his local track of Cornwall, Edelweiss, and Mohawk speedways, picking up 7 feature wins along the way. The first of which came in 2002 at Edelweiss Speedway, which also Qualified Lee for the Fulton 200, as Lee explained: “For some reason, I think I won a 50 lapper race at Edelweiss in 2002 that qualified me for the Fulton 200. The only time I raced the 200.”

By mid-2007, Lee was seeking a change in his racing as things had become stagnant.

Around that same time, good friend and fellow racer Brian “Slim” McDonald, who had made the switch over to Sprint cars for some time now, offered up the driving duties in his back-up car for the last few races of the season.

This was the change Ladouceur was looking for and quickly began exploring what it would take to switch to the Sprint Car division and its grueling schedule. With most of the races being a substantial drive away and the Empire Super Sprints Series moving from track to track each race, Lee realized there would be a lot of time spent on the road, but felt this move was still feasible. Ladouceur then acquired a car from Michael Parent Racing out of Quebec. Lee went through the car over the winter months.  He was ready to race by the Sprint by 2008 when good friend and helper McDonald of West Front Construction then came through as a sponsor.

Two thousand and eight would be a year of learning the ropes on the ESS tour for the 10-year veteran, but in early August, Lee would pick up his first win on the ESS tour at one of his favorite local tracks, Autodrome Edelweiss. The following year, Lee picked up a second win at Autodrome Drummond.

The 2011 season unfolded on a bit of a whim. Running the ESS tour was the base plan but Ladouceur decided to try the Southern Ontario Sprint tour because the first race of the season did not conflict with the ESS Tour.

That first race with the SOS series went so well; Lee decided to try out the second round of the tour, which provided equally good results. That spur of the moment decision to run the first SOS tour race proved very fruitful in the end, as Lee Ladouceur managed to run the entire 10 race series, capturing the 2011 SOS Sprint Car Tour Championship.

The following year, Lee repeated his success with a second championship in the Southern Ontario Sprints.

For the next few seasons, Ladouceur raced between the ESS and SOS tours and, from time to time, he ran in the Patriot Sprint Tour

Lee would also fill in the driving duties in the Modified division and even in the Late Model division when a seat came available.

Last year, Lee stayed closer to home. With Billy Dunn opting out of the driving duties of the Ladouceur family No. 23 car to run his own car at his hometown track of Can-Am Speedway, the logical conclusion was to have Lee fill in the seat and drive for the family-run team. The 2018 season overall was a good season for the now 41-year-old who returned to the Modified ranks at Mohawk International Raceway full-time in the 23 car. Lee also took over the driving duties for the number 88 car of Jim Primrose racing team shortly into the season at Cornwall Motor Speedway. He picked up eight top five finishes, two of which were podium finishes.

Finishing third in the points at the Mohawk International Raceway last season, I would have thought Lee would be back trying to challenge for the championship but Lee explained this will be not the case.

“I’ll be racing Jim Primrose’s performance 88 car at Brockville and Cornwall all season. Mohawk is not in the plans unless special races or maybe run someone’s car once in a while.” With the season opener a few months away, this opportunity to run behind the wheel of the 88 Jim’s performance machine will allow Lee to concentrate more on the driving duties as the car will be maintained at Jim’s shop during the week.

Hopefully, this arrangement will permit this talented driver to carry some of the success of last season into 2019.

On a side note, Lee has already started passing the torch on to his children. Lee’s daughter Hannah and son’s Trey and Liam all compete in the Kart racing ranks at Cornwall Motor Speedway. Wife Donna, who does all the car and Kart wraps through her vehicle wrap business, helps out and is 100% supportive as it takes some coordination between Lee and Donna to get all the kids ready when all three are racing on the same night.

In essence, the family name is w    ell on its way to a mainstay within the racing world for years to come whether on the track or through cars wraps, the name Ladouceur will remain synonymous to the world of dirt track racing.

*Special thanks to Rick Young you for one of the photographs used in the article.