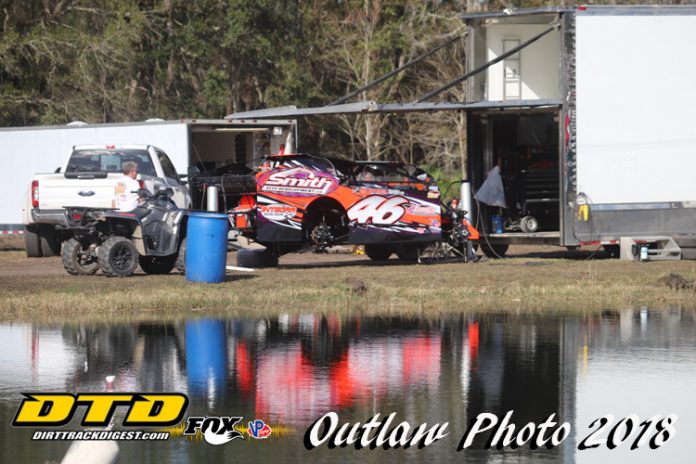 BARBERVILLE, FL – Luckily the rain has stopped and the Super DIRTcar Series big-block Modfieds are ready for action tonight at Volusia Speedway Park on Wednesday night.

Stay tuned here to Dirt Track Digest for coverage all night long including recaps and results.

Heat Race Recaps and Finishes
Heat 1 Recap: Stewart Friesen and Larry Wight brought the field to the green flag with Friesen jumping out to the early lead. Tim Fuller made a power move on the start and moved himself up to fourth as they entered turn one.

Friesen and Wight battled down the backstretch on the opening lap with Larry Wight powering his No. 99L mount to the top spot as they entered turn three.

With two laps to go Friesen put his No. 44 machine right on the back bumper of Wight but was unable to make the pass.

Friesen tried one more bonsai move on the final lap getting into turn three and got to the side of Wight, but couldn’t get by.

The win would go to Wight, with Friesen, Peter Britten, Fuller and Demetrios Drellos rounding out the qualified cars.

Heat 2 Recap: In heat race number two it was Billy Decker and Anthony Perrego who started on the front row.

Decker raced out to the early lead while Perrego jumped the cushion in turn one and lost two spots to Pat Ward and Mat Williamson, but the yellow flag flew for the No. 8 of Rich Scagliotta, who hit the first turn wall. Scagliotta needed a wrecker to be removed from the speedway.

On the restart Decker and Perrego jumped out to the lead but the show was Williamson as he powered past the No. 42p of Ward in turn three with four laps complete.

With the track extremely fast everyone migrated to the bottom and it was Decker picking up the win in heat race number two. Perrego, Williamson, Ward and Yan Bussiere also qualified their machines for the feature event.

Sheppard and Erick Rudolph got the jump on the start of the race and took off on outside pole-sitter Thomas, who dropped all the way to fourth on the opening lap.

Jeremy Smith put pressure on the No. 9 of Thomas but was unable to make the pass as the field came to the halfway signal.

It was all Sheppard in this one as he put over a straightaway between himself and Rudolph at the finish. Those two will go to the redraw with Thomas, Smith, and Jim Britt transferring to tonight’s 30 lap feature.

Laubach got out to the early lead and Jessey Mueller tried to make a move on Pauch going into turn one on the opening lap but he was unable to complete the pass.

Tyler Siri immediately put pressure on the No. 19 of Mueller down the backstretch with Danny Johnson in tow.

Mueller was able to hold off the charges of both Siri and Johnson to hold onto the third spot until Siri charged hard into turn one and slid up the track.

The two almost made contact but Mueller was able to power by the Siri 5 machine.

While all this was going on, the No. 7 of Laubach increased his lead on the Pauch machine.

Laubach held on for the win in heat race number four with Pauch, Mueller, Siri, and Johnson completing the transfer cars.

Last Chance Showdown 1 Recap: Ryan Godown took the early lead with Brett Hearn looking to the inside on lap one. Hearn was there at the line.

Godown continued to work the top while Hearn worked the bottom. The top two ran side-by-side to the line as they completed lap two.

As Godown and Hearn battled at the front, Mario Clair moved up into the third position around Scott Hitchens.

Halfway through the race Godown and Hearn were the class of the field while Clair and Hitchens continued their battle for the third position.

As the laps clicked off Godown started pulling away.  Hearn stayed second with Clair comfortably in the third spot.

At the checkered Godown took the win with Hearn and Clair also transferring to the feature.

Haers bobbled on the second lap allowing Lehner to open up the advantage while feeling the pressure from Darwin Greene.

The caution came out with two laps complete as Bellemare spun in turn two.  Lehner was the leader with Haers and Greene in transfer positions.

Haers wrestled the lead away from Lehner on the top side off of turns three and four on the restart.  He led by a bumper at the line.

Marc Johnson asserted himself at the halfway point taking the final transfer spot from Greene with Coffey also getting by for fourth putting Greene to fifth.

It looked like Haers was going to get it done until the yellow came out on lap nine as Johnson slowed while running in the final transfer position.  That handed the position over to Coffey.

On the restart Greene spun in turn four at the opening to the infield requiring another caution to be displayed.

Haers went on to pull away for the victory at the green with Lehner crossing the line in second.  Coffey was the final transfer by a foot over Rauscher.

Short Feature Recap: At the green Larry Wight took the lead from teammate Billy Decker on the high-side of turns three and four on lap one.

Decker took the lead on lap four as Wight jumped the cushion and lost multiple spots giving the second spot to Sheppard.

Yan Bussiere is the first caution on lap five as he slowed on the frontstretch.  Decker leads Sheppard, Perrego, Wight and Rudolph at this point.

Decker maintained the advantage after the green flag with Sheppard in tow.

With 10 laps in, Decker continued to have the advantage over Sheppard, Perrego, Wight and Rudolph.

The caution came out on lap 12 as Haers slowed with problems.

Decker remained in the top spot as the race resumed with Sheppard continuing in second.

Decker resumed command at the green.  He continued to lead at the halfway point before another caution for a slowing Mario Clair who had a left rear flat.

Perrego tried for the lead on the restart, but it wasn’t enough as Wight went by for second with Decker leading the way.

Pauch began to charge on lap 18 as he took the runner-up position around Wight.

Wight was able to shot back under Pauch on lap 22 to get back to second as Decker continued to lead the way.

With five to go Pauch got back around Wight for the runner-up position as he looked to close on Decker.  Two laps later Wight got the spot back from Pauch.

Decker went on to take the win over Wight, Pauch, Perrego and Pat Ward.