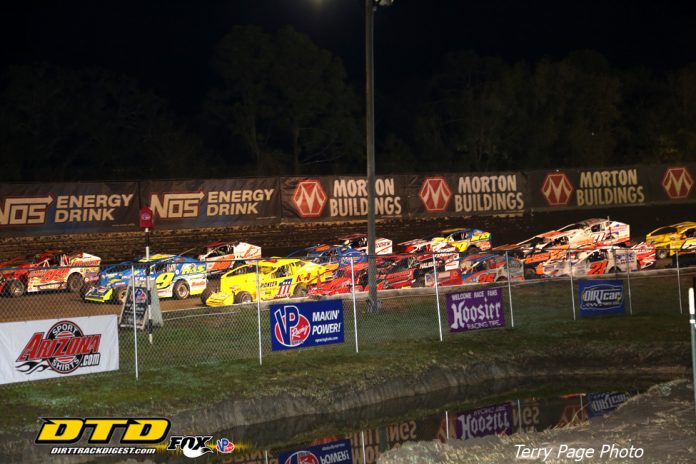 BARBERVILLE, FL – Billy Decker held off the challenges of both Billy Pauch and teammate Larry Wight for his third career Volusia Speedway Park win on Wednesday night in his first start for LJL Racing since 2015.

Who will win on Thursday night? Stay tuned here to Dirt Track Digest for coverage all night long including recaps and results.

Heat Race Recaps and Finishes
Heat 1 Recap: Rick Laubach got the jump on Sheppard heading into turn one at the start.  He worked the high lane all the way around the track to lead lap one by a bumper.

Sheppard wrestled the lead back on the bottom of turns one and two on the next lap.

At the halfway point Sheppard started opening up the advantage over Laubach and Hearn.

Sheppard checked out for the win in heat race one over Laubach, Hearn, Pauch and Jack Lehner

Heat 2 Recap: Will Thomas picked up the lead at the start over Britten and Wednesday’s winner Billy Decker.

Thomas pulled away during the first couple of laps as he worked the high-lane on the speedway.

As Thomas led, Britten and Decker battled for second and a redraw spot as the race reached the halfway point.

Thomas pulled out to a near two second advantage as the race reached it’s final stages.

Thomas went on to win over Britten, Decker, Tim Fuller and Mat Williamson.

Heat 3 Recap: No surprise that Stewart Friesen took the lead at the green and quickly pulled away over Jessey Mueller and Justin Haers.

Haers found himself in a hornet’s nest as he battled with Pat Ward and Marc Johnson on lap two.

Friesen dominated at the halfway point with Mueller holding second then Haers, Ward and M Johnson.

It was all Friesen as the laps clicked off.  He was gone while in a different car than he ran the previous night.

Friesen went on to win over Mueller, Haers, Ward and M Johnson.

Heat 4 Recap: Danny Johnson led the way on lap one over Larry Wight before a caution came out on lap two as Godown and Bussiere got hooked in turn one.

When action resumed Johnson again powered the lead sliding up in front of Wight.  Perrego then took second a lap later from Wight.

Perrego continued working the bottom as he tried to track down teammate Johnson at the halfway point.

Johnson was able to pull away as Perrego and Wight battled for second on laps five and six.

At the checkered it was Johnson taking the win over Perrego, Wight, Erick Rudolph and Godown.

Last Chance Showdown 1 Recap: Jeremy Smith started from the pole and quickly asserted himself as the race leader on lap one.

A lap later he bobbled allowing Coffey to shoot down low for the lead on lap two in corners one and two.

Coffey and Smith continued in the transfer spots while Darwin Greene and Mario Clair put on a show for the third spot before Clair made a mistake on lap five.

Greene began working the top allowing him to close in and take the final transfer spot away from Smith on lap six.

With seven laps complete, caution was necessary as Scagliotta spun in turn four.  At this point it was Coffey the leader over Greene and Smith.

Coffey restarted on the bottom, but it was Greene on the top taking the lead at the exit off turn four to lead lap eight.

Coffey regrouped on lap nine to lead the way over Greene in an intense battle.

Coffey went on to win with Greene finishing in second to transfer to the main event.

Last Chance Showdown 2 Recap: Demetrios Drellos started on the pole of the final qualifying event of the night for the Modifieds and he was able to lead the first lap.

Early on Drellos checked out with Dave Allen and Tyler Thompson battling hard for second.  Allen worked the bottom lane with Thompson on the outside.

On lap four Thompson was able to get by and take the position away from Allen.

At the halfway point it was Drellos leading the way over Thompson and Allen.

Drellos lead increased as the race went on to over 2.5 seconds as the race reached the final third.

With eight laps in the record books the caution came out as Kyle Sheldon spun in the middle of turns three and four.  This gave the field another shot at Drellos and a qualifying spot.

On the restart Drellos got the job done with Allen attempting to take second from Thompson to no avail.

Drellos captured the checkered flag with Thompson finishing in second.

Short Feature Recap: The green flag waved with Peter Britten getting the lead off of turn two on lap one before the red flag was necessary for a flipping Danny Johnson in turn three. He was okay.

On the second attempt to get the race started, Britten was much better at the green racing out to the lead over Mueller and Friesen on lap one.

Britten continued to lead the way on lap two as Mueller and Friesen jockeyed for second.  Friesen got it for a lap before Mueller went back by.

Mueller worked high off of turn two on lap four to take the lead from Britten with Friesen and Sheppard right there.

Mueller just kept pounding the cushion, but Friesen hung with him.  Then, on lap seven, Mueller went low opening the door for Friesen to take the lead a lap later.

As Friesen led the way Sheppard moved by Mueller while working over Britten as lap 10 came to a close.

Sheppard took second on lap 12 and a lap later he went to the lead on the bottom of turns three and four.

At the halfway point it was Sheppard leading the way in traffic over Friesen, Perrego, Britten and Mueller.

Friesen hung right with Sheppard working the high-side as Sheppard kept his No. 9s on the bottom of the speedway in traffic.

With 10 laps to go it was Sheppard in heavy lapped traffic, then Friesen, Britten, Perrego and Mueller.  At this point Friesen tried the bottom groove while Sheppard moved up on the top of the speedway.

As the race reached the final five laps, Sheppard and Friesen were nose to tail as they came to the line.  Sheppard worked the cushion all the way around the speedway with Friesen searching.

Sheppard went on to claim the win over Friesen, Britten, Perrego and Billy Decker.