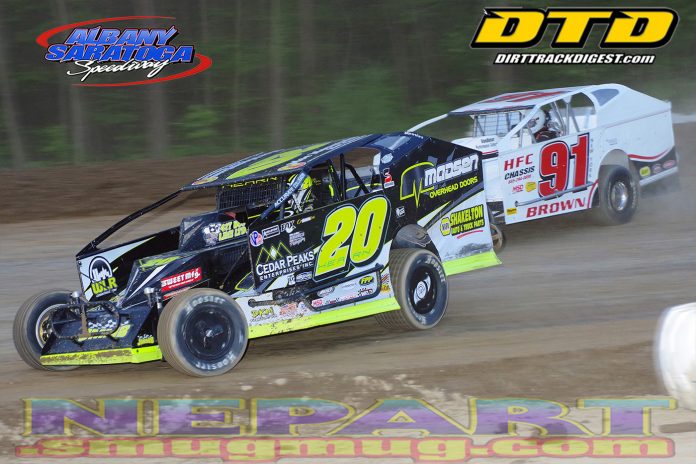 MALTA –The waiting game is finally over.

No, Colin Kaepernick hasn’t signed with an NFL team, and major league baseball star Bryce Harper hasn’t put his name on the dotted line with the Philadelphia Phillies.

The Albany-Saratoga Speedway 2019 schedule has been released!

Speedway promoter Lyle DeVore has put together the most ambitious schedule in the 54-year history of the historic Malta track, and if there’s one underlying theme, it’s money.
The schedule includes nine modified races that will pay in excess of $2,500 to the winner, highlighted by Brett Hearn’s “Big Show 11” on Tuesday, June 25. The Super DIRTcar Series race, which will be 111 laps, will pay $11,111 to win.

DeVore has also put together a five-race Sportsman Shootout Series, with each of those events paying $1,000 to the winner.

But DeVore warns that all that extra money will also mean extra scrutiny in the pits.

“We’re really going to crack down on the tech end of motors,” said DeVore at January’s awards banquet. “There’s way too much crap going on. When you pull off Route 9 this year, the gloves are off.”

Albany-Saratoga Speedway will kick off its 54th season of racing on Friday, April 19 when Bart Contracting and Schaghticoke Wine & Spirits present “Come ‘N Get it,” a 54-lap modified feature that will pay $5,400 to win. Last year, Tim McCreadie hauled in for the opener and used a last-lap pass to beat Matt Sheppard.

Sprint car fans should circle Friday, June 14 on their calendars, because that’s the night the Empire Super Sprints invade the historic speedway as part of the “Hoosier Daddy” Father’s Day special.

Hearn’s “Big Show 10” drew the biggest crowd in the history of the speedway last season, and the “Jersey Jet” wants to top that with his 111-lapper this season. “Big Show 11” has a rain date of Wednesday, July 10.

Two weeks after “Big Show 11,” on Friday, July 5, modifieds will be running for $4,000 to win in the Don Warner Memorial. Modified heat race winners will each receive a $250 bonus. That card will also include one of the $1,000 to win sportsman races.

On Friday, July 26, it will be “Stan the Man” night in honor of Lyle DeVore’s father Stan, who passed away two years ago. The modifieds will be running for $3,200 to win that night, while Ron Mensing’s Native Pride program will be sponsoring a 32-lap feature for pro stocks.

August will feature the John Grady Memorial Nostalgia Night on Aug. 2, the CRSA sprints on Aug. 9 and the wildly popular Back to School Backpack Giveaway on Aug. 23.

The spectacular Sept. 6 card will feature the first Pro Stock Classic, which will pay $5,000 to win, as well as the King of Dirt Northeast Crate Nationals.

The season will end with the two-day Tom Clothier Trucking Suicide Prevention program on Sept. 20-21.

The highlight of the Sept. 20 card will be a small block modified feature paying $2,500 to win. Action on the track will also include sportsman, street stocks, four-cylinders and modified time trials.

Both the Super DIRTcar modified and Super DIRTcar pro stock series are scheduled to run on Saturday, Sept. 21. Details for that program are still being worked out, and the exact format of both features will be determined later in the season.

In addition to racing, Albany-Saratoga Speedway will be holding four Monday night cruise-ins for custom and vintage vehicles. Those events are scheduled for June 10, July 8, Aug. 12 and Sept. 9. All cars, trucks and motorcycles are welcome, and there’s no cutoff date. The cruise-ins will be held from 4-9 p.m.

Since its inception in 1965, “The Great Race Place” has been the home to some of the top modified drivers in the Northeast, and 2019 will be exception. The regular Friday night field includes Hearn, 13-time champion Ken Tremont Jr., past champions Ronnie Johnson and Marc Johnson and fan favorites Matt DeLorenzo and Keith Flach. Last year, Ronnie Johnson and DeLorenzo both finished the year with three wins, the most in the modified division.

In 2019, both Peter Britten and Brian Berger will also be using Albany-Saratoga as their Friday night homes, and NASCAR Gander World Truck Series driver Stewart Friesen will be racing in Malta when his NASCAR schedule allows. Last year, Friesen walked off with the top prize of $10,000 in “Big Show 10.”

The complete 2019 racing schedule can be accessed by going to albany-saratogaspeedway.com.