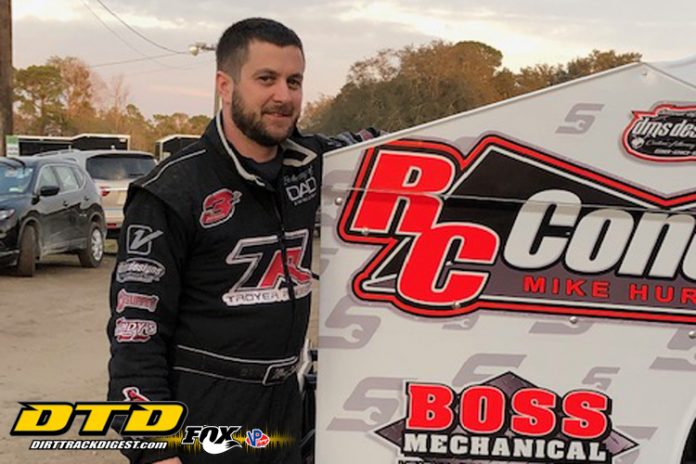 Our week began with a racing get together at Mark Krosky’s place at the Sunrise Beach Club in Daytona Beach. It was a beautiful day, with great food (some imported from Albany), great stories and just all around good times. Some friends we hadn’t see in a long time and we even met some new friends.

Another off track activity was Wednesday’s racing party at the Beberwyk’s in Port Orange. We shot this photo of what looked like a Lebanon Valley reunion with, Tommy Corellis, Ernie Marshall, Barry Cone, Matt Higgins, Marty Beberwyk and Kevin Starchak. There were several others from Northeast racing like Jimmy Davis’s mom and grandfather, wow hadn’t seen them in a long time. Our first night at Volusia turned out to be Gary Balough night for us. When we arrived it was just in time for the rain to start, rain that persisted for about an hour causing DIRTcar officials to cancel the show. We did get to the concession area where we found Gary Balough setting up his books, sweatshirts and tee shirts to sell and fans started to gather around the legendary driver for an update on his health after the fall he took back in October. Balough looked much as he had the last time we saw him at Middletown. Balough said it was serious and they gave him 2% chance of making it. When he asked, “2% out of 10?” The doctor said no, “2% out of 100.” He knows he is very fortunate to be alive and he has nothing but praise for the team of doctors and therapist that cared for him at Cleveland Metro Hospital’s trauma center.

The trip to Volusia for many of the drivers each year is a way to test new things on their cars and also get a jump start on the upcoming season. For some it is a time to get away for some sunshine and a break from the weather in the Northeast. One such driver is Kyle Sheldon, he comes down to race but at the same time enjoys his time in Florida. He knows he’s running with some of the best in the business and will probably learn something along the way. It’s great to hear Kyle say he’s enjoying himself.

Marc Johnson made the trip for the first time to race in a No. 33 Modified of Scott Hamlin. Marc will race the car at Lebanon Valley this season, his first season on the high banks. For first timers at Volusia just qualifying is a big task and on top of that Marc, who is a Troyer man, is also adjusting to a PMC Chassis. Marc was able to qualify one night.

In talking with Matt Sheppard after winning the second night he was happy to get to victory lane. His plans for the season is to stick with the SDS Tour but also said that Orange County’s 100th Anniversary show does not conflict with anything on the DIRTcar schedule so he would probably be there.

We also talked with Danny Johnson after his barrel roll crash on the second night and asked him how he was feeling. He said he was more tired than hurt because he spent much time getting the car back together. He finished just out of the top ten on night three. And you’ll also notice he’s in good with Pastor Ed.

When we ran into George Shackelton a sponsor on Danny Johnson’s Modified he sent us to Orange County Speedway racer, Chris Stevens for info on the upcoming season when Danny Johnson will drive his small block on the SDS Tour. Chris is an O.C.F. S. regular driving his small block on Saturday nights. “We learn alot from Danny and his son when they come down to help us,” said Chris. Chris’s family has been in racing since the 1970’s when his father, Frank raced at the track and the tradition continues today with Chris at Middletown and his son, Kevin in a Sportsman at Accord each week. We also spoke with another first timer to Volusia, Demetrios Drellos, who was there with his famous No. 111. Demetrios said his goal for the trip was to make every show and he was able to do just that. The first night he finished 13th, the second night 15th, 19th on the third night, and 14th on the final night. However, his feature finishes do not tell the whole story because if anyone has seen him run up North you know he is going to put his best effort into every race he runs. The first night he qualified fifth in his heat that put him in the feature. The second night he won the consi and the third night he and Kyle Coffey put on one of the best consi of the four nights of races for the Mods. Kyle Coffey was the eventual victor at the wire, Demetrios was second putting him into the feature for night three. The fourth night, Demetrios was added to the field due to his place in the points. We shot this photo as Demetrios signed an autograph for Kim, a former Lebanon Valley regular, now living in Florida.

We also saw Dale Planck and his son, Brandon. Dale will be making a return to the Fulton oval this season in an Eric Miller Modified. He hasn’t raced regularly since 2013 and when the offer came he said he jumped at it. Son Brandon will have his Dig Racing Products and services at the track also this season. Planck’s record at Fulton shows 61 career wins from 1989 to 2013.

On night three we ran into veteran Northeast track announcer, Jim King and his brother Todd. Todd is a member of the Fonda river club. According to the King brothers it was 1974, Fonda was running an early Spring show, Todd got tangle up with Bob Deming and shot over the guardrail on the backstretch, SPLASH!!!! into the Mohawk River. He still has the oar that he was presented with that year after his splash down. Jack Lehner is another Capital District racer, racing at Volusia for the first time during the DIRTcar Nationals. Jack made the trip, having not been in a Modified for long and qualified for every show, with one night being by way of provisional due to his place in the points. Jack’s final night was his best in the 50-lap main event he placed 11th against some of the very best in Modified racing. Jack said his trip was to learn from and race with the best and he was soaking up racing knowledge along with the Florida sunshine. Cass Bennett has been racing in the Northeast for many years but had never been to Florida to race, had only come down to spectate twice before. This year Cass came to Florida to race and take that off his bucket list. Most of his crew was not able to make the trip so he came with his one person crew, Colleen Stiffen. Although Cass did not make the feature, racing only three nights, he was still one of the happiest we spoke with while walking through the pits. He was there to enjoy himself.

As we close this we want to say thank you to DIRTcar for courtesies extended to us while at Volusia and the great racing provided each night by all the competitors.