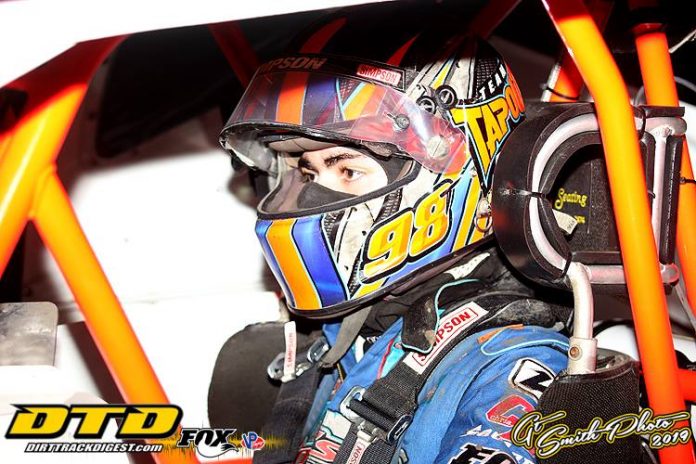 Tyler Thompson was a first time entrant into the DIRTcar Nationals at Volusia Speedway Park.  Not only was it his first taste of action at the ‘World’s Fastest Half-Mile’ it was also was Thompson’s first foray into the big-block Modified racing world on the dirt.

Thompson is a standout Sportsman driver in Central New York who came to the DIRTcar Nationals looking for seat-time.  He has experience running the more powerful motor as he made a handful of stars with the Supermodified on the pavement at the Oswego Speedway. He used both of those prior experiences to help him tame Volusia.

“I’d say from the Sportsman I got the experience of being on dirt and from the Super (modified) I got used to the power,” cited Thompson. “I think that kind of helped me get the feel for it.”

His goal coming to the DIRTcar Nationals was to make it into one show. He did more than that, he made two main-events starts while holding his own against some very tough competition. He finished 21st on Thursday night before backing that up on Saturday with a tough 20th place run. His night didn’t end the way he would have liked on the hook, but he gained knowledge that will help him going forward.

“This is like a win for me,” he said. “My goal was to make one show and I did. I’m super happy how the week has been so far.”

Thompson and his team have an ambitious schedule planned for 2019. The goal is to hit every Supermodified event at the Oswego Speedway while also competing on the Super DIRTcar Series when possible.

“Our weekly shows are going to be at Oswego (Speedway),” mentioned Thompson. “Then we are just going to run the big-block on dirt. We want to run all the series races that don’t interfere with Oswego and maybe hit some other shows here or there.”

It’s going to be big jump for the Fulton, N.Y., native going from the Sportsman ranks to the Modifieds, but one he feels ready for. He’s confident he can make the jump. He’s already had some limited successes in the Supermodified so it should be only a matter of time until he finds some success on the dirt as well.