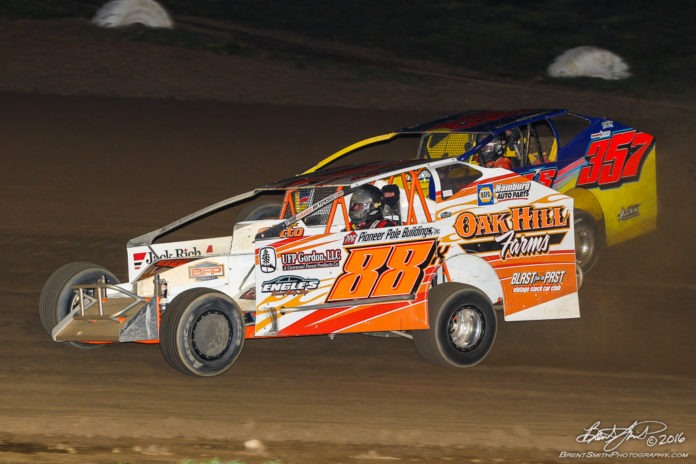 MINERSVILLE, PA – The 2019 small block modified season at the Big Diamond Speedway is shaping up to be one for the history books. Promoters Jake and Jasmine Smulley have laid out a schedule for the mighty modifieds that is jam packed with many high paying events highlighted by the $10,000 to win “Money in the Mountains” small block/big block race scheduled for Friday night April 19th and the annual season ending Coalcracker race this year paying an unprecedented $17,000 to winner of the 100-lap event.

The very lucrative 2019 schedule has not gone unnoticed in the modified world. Given the money laden schedule along with a new red clay track surface plus some additional lighting, Big Diamond Speedway has caught the attention of several drivers and teams who plan to make Big Diamond Speedway their home for Friday nights in 2019.

In 2019, the field at Big Diamond will be star studded to say the least with track regulars Duane Howard, Craig Von Dohren, Jeff Strunk, Ryan Godown, Ryan Krachun, Mike Lisowski, Kevin Beach Jr, Frank Yankowski, John Willman, Shawn Fitzpatrick, Scott Albert amongst others. Those drivers alone would be enough to make any promoter happy. But this season there will be many more driver/teams that will be looking to take home some of the Smulley’s money.

There are a handful of former Big Diamond Speedway regulars who plan to return this season such as former track champions Rick Laubach and Billy Pauch Jr. Both drivers have committed to being track regulars this season after being part-time performers the past couple of years. Laubach will be behind the wheel of the Ryan Kerr owned No. 1K looking to take home his second track championship as will Pauch Jr who will splitting the season in his own No. 15 and the Breitenstein No. 14. Jared Umbenhauer is another driver who has competed at Big Diamond on a part-time basis in the past who will be a track regular this season driving the Mike Harvey owned No. 1. Umbenhauer has been fast in his limited starts at the speedway but has yet to take home a checkered flag in the modified division. Brett Kressley who has four career wins at Big Diamond will be back as a regular once again this season in the family owned No. 19K looking to add to his win totals. Justin Grim and his family owned No. 61 have also announced a return to the speedway in 2019 as has Dale Hartz in a former Jeff Strunk car owned by Jeff Hertzog.

Moving up this year from the Sportsman ranks to the 358 Modified division is your 2018 Sportsman champ Alex Yankowski. All the 14 y/o driver out of Troop, PA did last year was completely dominate the sportsman division on his way to the 2018 title with six wins. Anticipation is high for the teenage sensation to see what he can do against some of his boyhood idols. Another former sportsman dominator is returning to race on Fridays this season in the modified division. 2017 sportsman champion Matt Stangle who made the move to the big cars last season is set to make his return to his former Friday night stomping ground this season. Stangle was the man to beat in 2017 with five wins in the sportsman ranks and is looking forward to returning this season to battle with big boys at a track he has had much success at.

Also joining the ranks of track regulars this year at Big Diamond will be the “Wizard of Wind Gap” Frank Cozze. Cozze will be teaming with owner Dave Renaldo to drive the potent No. 401 Bicknell modified every Friday night at the speedway. The Cozze/Renaldo team ran the Short Track Super Series South region last year, but this year decided to call Big Diamond their home on Friday nights. Owner Renaldo is happy to run at just one track this season knowing everyone will be running the same rules package. A surprise announcement was released just two weeks ago that southern tier driver Nick Rochinski will be making a change in venues this season and call Big Diamond his home Friday nights in his No. 20R Teo chassis. Rochinski brings strong resume to the speedway and will be a welcome addition to an already star-studded lineup. Also joining the ranks of Friday night regulars this season will be Kyle Merkel in his No. 118 along with former New Egypt Speedway regular Tim Apgar driving the Apgar Trucking No. 98 modified. Steve Young has also indicated that he will call Big Diamond Speedway home on Friday nights in his family owned No. 187.

The lineup of drivers this season at Big Diamond Speedway is shaping up to be one of the best ever and it all gets underway on Friday night April 12th as part of Schaeffer’s Motorsports night highlighted with a big $4000 to win 30-lap feature on tap for the Insinger Performance 358 Modifieds which will be sure to attract other drivers looking to cash in on some of the big money being offered this season. The U.S.S Achey Sportsman will also race for a $1000 to win main event on opening night. The following Friday night April 19th will be the annual “Money on the Mountains race presented by Fire Management and Control. This season’s MITM race will be run under the Brett Deyo STSS rules (no sail panels) and will pay the winner of the big event a premium winner’s share of $10,000. The money being offered is sure to attract the best of the best drivers and teams in the northeast like former MITM winner Ryan Watt. Look for superstar drivers like Jimmy Horton, Matt Sheppard and Stewart Friesen to possibly make their way to the Schuylkill County dirt oval to take home the grand prize..

For more information on all events at Big Diamond Speedway please check out our website at www.bigdspeedway.net. There you will find a full schedule of events along with rules, media credential forms along with photos and much more.