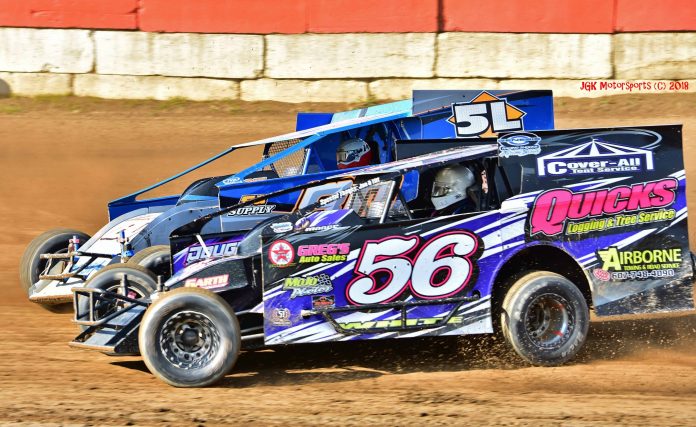 KIRKWOOD, NY – Modified racing will return to Five Mile Point Speedway in a big way in 2019, as the track pays tribute to a track legend. Saturday, April 20th will be Doug Worthing Tribute Night, featuring a 46 lap feature, paying $2,000 to win. The track will open the 2019 racing season with March Madness on Saturday, March 30th.

The race pays tribute to Doug Worthing, one of the all-time greats, and a member of the original 50 Greatest Drivers at Five Mile Point Speedway. The 46 lap distance is significant because it is the number of Modified feature wins that the driver known as the “Junkyard Jet” garnered in his career at the Point, putting him fourth on the all-time feature win list.

Track Co-Promoter Tyler Harpell stated, “We are excited to have the Modifieds returning in 2019, and we thought it would be pretty exciting to have their season opener pay tribute to Doug Worthing”. The Modifieds will be joined by the Crate Sportsman, 600cc Mods, Four Cylinders and Factory Stocks. All divisions will be racing for weekly points on that night as well.

While the track gears up to honor a legend in April, the green flag will actually drop on the 2019 season on Saturday, March 30th with the running of March Madness. The Street Stocks, Factory Stocks and Four Cylinders will all be in competition on that day. An Open Practice will be held the night prior on Friday, March 29th for all divisions. Also, any drivers that can’t make it on Friday to practice will be given an opportunity to practice following the races on Saturday.

Check our Facebook page in the coming days as we release more of our schedule leading up to the Southern Tier Speedworld Car Show March 1st through 3rd at the Oakdale Mall, where we will release the entire schedule. There are many more exciting announcements coming in the days and weeks ahead.

The speedway opens under new management in 2019. Brothers Tyler, Tanner and Tucker Harpell will be at the helm. The brothers are the Great Grandsons of track founders Irv and Anna Heath, nephews of track owner, and former Promoter Andrew Harpell and sons of former Promoter Dan Harpell. 2019 marks to 69th consecutive year of racing at the Southern Tier oval.

Five Mile Point Speedway is located on Francis Street in Kirkwood, New York. For further information you can call the speedway office at 607-775-5555, look us up on Facebook or log onto our website at 5MilePointSpeedway.com.