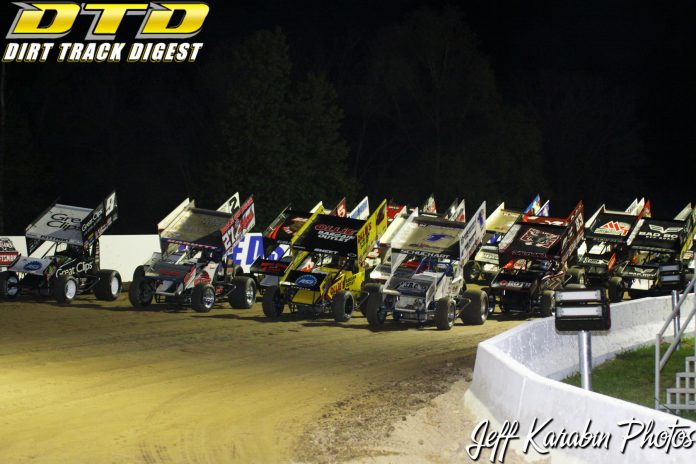 WEEDSPORT, NY – Pre-sale tickets for Weedsport Speedway’s month of May schedule, including the Empire State Challenge featuring the World of Outlaws NOS Energy Drink Sprint Car Series on Sunday, May 19, are now on sale.

To pre-purchase tickets for 2019’s May events, simply visit www.weedsportspeedway.com, then click the orange “Tickets” icon on the top right-hand side of the main page. From there, you will be able to purchase tickets for the Sunday, May 19 Empire State Challenge as well as the Super DIRTcar Series Big Block Modified Heroes Remembered 100 on Monday, May 27.

A full listing of event details, including event times and pricing, can be found online at www.weedsportspeedway.com under the “Events” tab.
To purchase tickets over the phone call (315) 834-3067.

The season opening Empire State Challenge will feature all of the cars and stars of the World of Outlaws NOS Energy Drink Sprint Car Series, making their only stop to the state of New York in 2019, including last year’s championship rivals Donny Schatz and Brad Sweet. Joining the full-time cast of drivers on May 19 will be former Monster Energy NASCAR Cup Series driver, Kasey Kahne, running as a teammate to Sweet out of the KKR stables.

The Empire State Challenge will also include the opening round of the Stirling Lubricants/Champion Racing Oil Modified Series with $3,000 on the line for Modified competitors.

Running as a joint event with the Stirling Lubricants/Champion Racing Oil Modified Series on May 27, the Super DIRTcar Series winner on the evening will walk away with a cool $7,500.

Joining the Modifieds on the Memorial Day schedule will be the DIRTcar Sportsman, and for the first time, the CRSA Sprint Car Series.

Camping for 2019 is also available through the orange “Tickets” tab at www.weedsportspeedway.com.

All-new restroom and shower facilities are being planned for the continually upgraded Weedsport Speedway campground, with full information available under the “Venue Info” and “Camping” tabs.

For more information on Weedsport Speedway, visit online at www.weedsportspeedway.com, follow on Twitter @WeedsportSpdwy and LIKE on Facebook.
About Weedsport Speedway: Officially opened for the first time on July 24, 1955 – the Weedsport Speedway 3/8 mile dirt oval has produced a legendary list of drivers and champions including Will Cagle, Danny Johnson, Bob McCreadie, Alan Johnson, Jack Johnson, and Dave Lape to name a few. In 2018, Weedsport introduced the all-new Weedsport Kartway, just outside of the Speedway’s main pit area, to begin to foster the next generation of racers, crew members and race fans. Together, Weedsport Speedway and Kartway are excited to bring fans and followers a schedule of 15 racing events in 2019, hosting everything from Karts and Sprint Cars, to Late Models and Modifieds, Pro Stocks and Micro Sprints, even Flat Track Motorcycles. Couple the racing with state-of-the-art camping and track amenities, unmatched on-site television production capabilities, plus the ability for large scale concert productions and Weedsport is one of the marquee entertainment venues in the country.