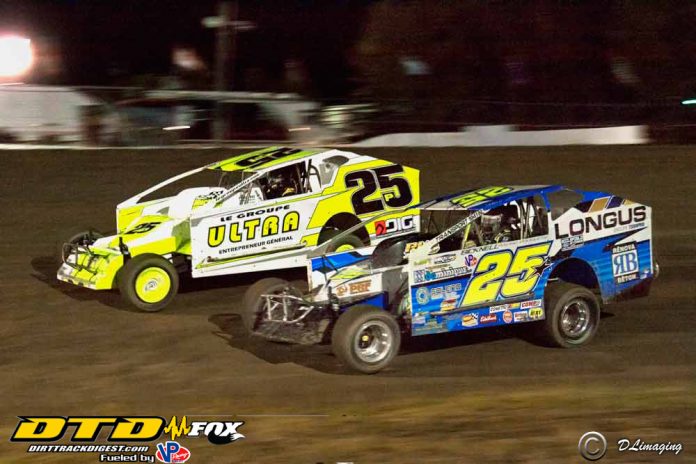 CORNWALL, ONT – The 2019 racing schedule is getting more clarity as we advance in the winter months, Cornwall Motor Speedway, promoter, Raymond Lavergne had to make a change in scheduling regarding the Race for the Cure 150. The Fat Les’s Chip Stand Canadian Nationals is getting a fourth date as well.

A needed schedule change was in order for the Race for the Cure 150, the event that was initially scheduled on August 15 is not on August 22nd: ‘’One American track added a high paying event during the same dates and would have impacted our field of cars, we want to have a quality and also a high volume of cars in our pit area for this event’’ says Martin Bélanger.

The return of St.Lawrence Radiology and TAS Racing as major sponsors, the same purse structure was confirmed for this year’s event. The feature winner will get $12,000 and each qualified driver for the 150 laps will receive a minimum of $500.

In order to maximise local presence to this race, Seaway GM is adding a $2,000 bonus to the highest Cornwall Speedway finisher in the event, to be eligible, the driver must have participate to all Modified event from opening night until that evening. If one of our regular runner wins, he would leave the speedway with a total of $14,000 in his pocket. A great way to attract all our locals to this event.


This will be the third edition of this event and field of 40 cars in attendance were noticeable for the first two events. It attracted several drivers from Ontario, Quebec and also regulars from the Super DIRTcar Big Block Series. Matt Sheppard made a spectacular run back from 26th and claiming the win over Mat Williamson in the final moments of the race.

The DIRTcar Sportsman Series will also be part of the event with a 50-lap race, a big field of cars is expected for that race.

A 4th date has been added to the Fat Les’s Chip Stand Canadian Nationals with June 23rd now counting towards the Series. This night will be very special as we will celebrate the 50th year of activities at the speedway with the Modifieds having a 50-lap feature paying a nice $5,000 to the winner. The Sportsman and Pro-Stock will also run 50-lap events while the Mini-Stock will have a 25-lap race. Several surprises are yet to be announced for that night! The other 3 dates for the Canadian Nationals will be May 19, August 4 and September 1.
Full Calendar announced by mid-March!

Stay tuned as we are in the final stages of our 2019 calendar, we expect to release the full calendar by mid-March along with the start of the early bird season pass sale, which is a good way to save some money to get in to see the best show in Eastern Ontario!