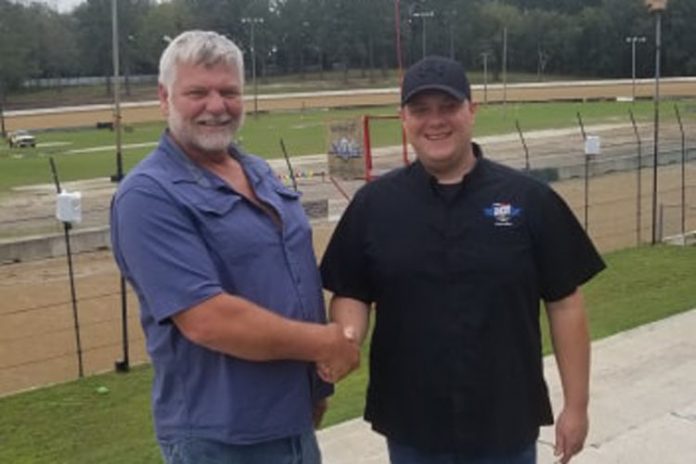 Fans of the Northeast Modified division that make the annual trek to Florida for racing action will now have another venue to see the division as Brett Deyo has made a deal to take the Short Track Super Series to the Sunshine State to kick-off the 2020 racing season. Deyo and All-Tech Raceway promoter Wendell Durrance met on Monday to work out the details to ensure a Sunshine Swing now for the drivers of the STSS.

Deyo left with a deal in hand that will see three nights of racing action at the Lake City, Fla., facility for the STSS from February 5 through the 8. The teams open the week with practice on Wednesday then race for three nights with purses of $5,000 to win, $7,500 to win while the Saturday night finale will pay a hefty $10,000.

Heading south in February was something Deyo felt like he needed to do. Each national touring series heads south during the month of February. The exposure is second to none as there is very little racing going on throughout the rest of the country.

Deyo also has sponsor supporters that wanted him to get to Florida. As a result he’s been putting in the miles doing as much research as he could about the various options available in the region. When all was said and done, All-Tech Raceway was the right place to make his Florida debut.

“I’ve been looking around because our sponsors wanted to go to Florida,” said Deyo about the decision to go to Florida. “We had a pretty good year and I wanted to go too. I wanted to find the right place. I’ve been scouring all of the different tracks in Florida. I’ve been looking at social media. I’ve probably watched every different track on YouTube that I could find. I watched hours upon hours of All-Tech video and the place just races awesome.”

All-Tech Raceway kept popping up to Deyo for a number of reasons. Several Northeast based teams have used the track the last couple of seasons for testing purposes before making their way to Volusia Speedway Park. He read rave reviews from Brett Hearn on Facebook. The facility also received high praise from the Teo Pro Car teams that have tested there.

“It came with good recommendations from the Modified people that have been there,” mentioned Deyo. “Brett Hearn was there to test and he wrote on his Facebook that it was the best kept secret in Florida and one of the nicest tracks. The Teo guys were testing on their way to Volusia (Speedway Park) and they spoke highly of it.”

After meeting with Durrance on Monday afternoon Deyo was impressed with him and all things that he has done. He feels like he couldn’t have found a better spot to showcase the STSS in Florida.

“When I got to talk to the promoter Wendell Durrance, he’s a cool guy,” cited Deyo. “He’s a former racer. He ran Late Models forever. We hit it off on the phone and then when I pulled in there this morning I knew it was the right place. It’s just awesome. He’s done a lot of stuff there. He started there in 2014 with a closed asphalt track. They ground up the asphalt, put the clay down, redid the walls and they just added seating for another 2,000 people in aluminum bleachers. They were supposed to use their all new concession stands this week but they rained out.

“The pits are really big and flat. It has a great sound system with great lights and they have room for campers. It has everything that we need and the track is not too big or not too small. It’s a perfect size for Modifieds. I definitely think we made the right decision after I got a chance to go there. It’s going to be the type of venue that we need to showcase our division when everyone is looking at us.”

As he usually does, Deyo has high expectations for his first foray this far south. He feels like releasing the schedule, purses and dates now it should only help grow the event before it gets here in 11 months. He wanted to give people lots of time to plan.

Besides being impressed with the facility, Deyo toured the local Lake City area in order to make sure that it could accommodate this type of event. He drove around the town on Monday researching all the amenities.

“Another reason I came down is I wanted to see the town of Lake City and see if it could handle something like this,” mentioned Deyo. “That is one of the cool things, because I think it can. There are so many restaurants and things to do right around there. You aren’t going to have a hard time getting people a place to stay or finding a place to eat when you get done with the races. There are plenty of places to go. That is all part of the experience. That is the fun part, going out and having fun afterwards.”

Deyo was asked about his impact on the DIRTcar Nationals the following week which averages between 40 and 50 cars. He feels like it should help that event as well as he has already had a number of teams indicate that they plan on making a week of it.

“I think people will stop and race with us on the way to Volusia,” cited Deyo. “I think there are going to be some people that race with us and then go home, but it’s going to be a mix. I think the money we are paying for the three nights is really going to attract people that have stayed away from Florida before. I honestly believe it will help the whole deal. Now you have that many more nights where you can race and make money. A team can now race seven times for x amount of dollars. Now they can go. People that didn’t go before will come down for the whole deal.”

Besides the Modfieds, Deyo is also bringing down the Crate Sportsman division as a support class. The current purse calls for events paying $1,250, $1,250 and $1,500. That is the base purse. He indicated that he’s already working on trying to increase the pay for those events.

“Last year, for something that was a big experiment at North Florida (Speedway), it shows that you make it work it down here,” said Deyo. “I think we can tweak the crate program and make that really big down here with the Modifieds too.”

Rules will follow the Short Track Super Series South region rulebook for the events, but they will be non-point races. He’ll also use Sunday, February 9 as a rain-date should any of the shows be lost to weather during the week.

All events will be broadcast on live on pay-per-view on DirtTrackDigest.tv.

With this announcement, Northeast race fans now have even more reason to get excited about the month of February for the Modified division.