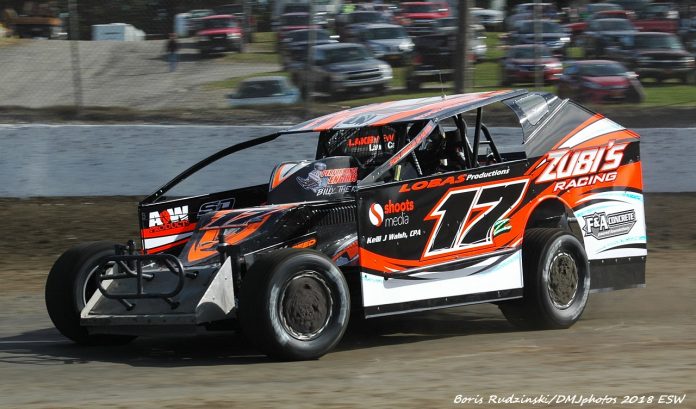 You could walk through the pits at any racetrack and never find anyone nicer than Dave Zubikowski owner of the Zubi’s racing No. 17Z. If you know the man affectionately just known as “Zubi” you can bet, you have yourself a friend. Talk to the man for a few minutes and you can tell he has an unbridled passion for dirt track Modified racing. For the past few years you could always find the Zubi’s team at pretty much any dirt track in the Northeast with their immaculately looking and prepared Modifieds.

However, in 2019 the team will be scaling it back a little as life will take a priority over racing this season. Recently married with a baby on the way. The Zubi’s team will just be focusing on racing this season at the Orange County Fair Speedway with driver Brian Krummel. Zubikowski will provide Krummel with cars in both the small-block division where they will be out to defend their 2018 points title and in the big-block division.

“Right now, we will be just running both divisions at Middletown for the year,” explained Zubikowski. “We might hunt and peck other shows during the year but right now Middletown is all I can commit to. My crew chief Kevin Gillespie has a baby on the way due in April/May and my wife and I have a baby due in May/June, so it’s going to be tough for us to commit to anything else at this point. With all that going on I just can’t guarantee us doing anything else right now. I don’t want to be totally out of the game because it’s what I love to do but family has to come first for me.”

When the team shows up at the track they will have top notch equipment and the modifieds will be ready to go. Crew chief Gillespie along with main mechanic Steve Ewanciw will have the Zubi’s team equipment prepped and ready to hit the track at full speed. The team will once again utilize TEO chassis’s in 2019 with power being supplied by Morrison (small-block), Precision (small-block) with Billy the Kid Performance providing the big-block power.

“We just got things going in the shop here recently,” mentioned Zubikowski. Brian (Krummel) has been here starting to work on the cars along with the rest of the crew. I hadn’t said anything yet about what we were planning on doing because we weren’t’ sure until just recently. Now that we know what we are doing its time to get the cars ready. We won the small block title at Middletown last year and I don’t see any reason we can’t do it again this season. With Middletown being so close to us it just makes sense for us to run there. They are doing really good things there and everything seems to be on the up and up.”

For a team that is used to traveling so much, this season will be a little different, but there still may be some wiggle room in the schedule to get out and travel to some different tracks.

“If everything goes according to plan, we might get out and travel a little bit, but we’ll see how it goes,” said Zubikowski. “I have an open small-block being built right now so hopefully we can dabble and hit some of the closer Deyo (Short Track Super Series) North shows. We would also like to get down to Grandview or Big Diamond for a couple of their big money shows because I know Brian loves running down there and I really like the people at both of those tracks, but we just have to wait and see how everything is going.”

With an expanding family on the horizon, “Zubi” definitely has his priorities in place but you can rest assure that when that Zubi’s Racing Team hauler pulls into the track the team will be all business and ready to get after it. That’s the only way the Zubi’s team along with its owner know how to go about it.