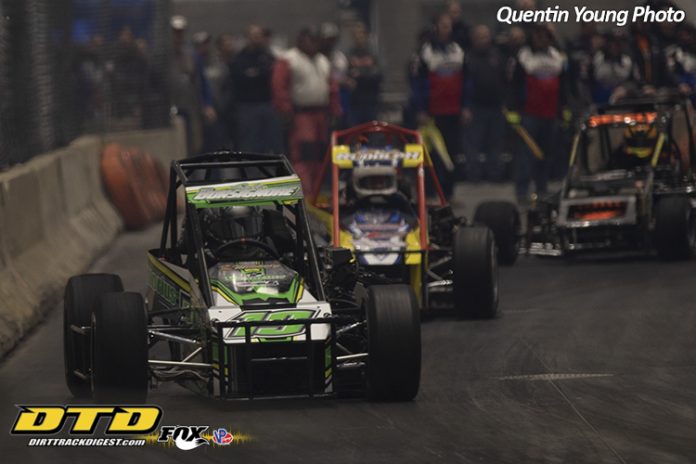 It was a night of first on Friday night at the New York State Fairgrounds Exposition Center. The Indoor Auto Racing Series made its first ever appearance at the new facility. Although it was a brand new venue, it was a battle of two of the best in the TQ Midgets as Justin Bonsignore and Erick Rudolph. The pair swapped the lead multiple times before Bonsignore was able to come out on top to win the inaugural event.

Bonsignore’s victory was his second career TQ Midget win on the concrete. His first came in Allentown, PA. It wasn’t however the first time he’s raced in Syracuse. As a kid the Holtsville, N.Y., driver competed on the concrete at the Center of Progress building while racing gokarts. A place he also used to race with Rudolph.

“It’s always fun when Lenny does all these new events,” stated Bonsignore afterwards. “I used to race at the other building as a kid racing gokarts against Erick, before he was old enough to race. I know that because I’m older than him. We raced against each other as eight year old, he was probably five. I grew up racing there. I haven’t been here in a long time. When they put new arenas together it’s always fun. You want to be the first person on the track, the first pole winner, the first feature winner. It’s special. I just got lucky that one time, but it’s nice to back it up even though (Ryan) Flores isn’t here tonight. I love doing these indoor races. It always better when you’re running good.”

Due it being a new facility for an indoor event, the track threw some curveballs at the teams competing as it didn’t take rubber like a traditional indoor event. It remained much slicker throughout the night forcing drivers to adjust. Luckily for Bonsignore, he was fast out of the box setting fast time before the track started coming to him at the conclusion of the 40-lap, $2,000 to win feature. That allowed him to race his way back by Rudolph who had passed him earlier in the race on the outside.


“The track has been a handful all day,” mentioned Bonsignore. “It just wasn’t taking rubber. The first bunch of restarts I was just struggling. His (Rudolph) car was really good on the slick track. I was beat at the point. I could see the track starting to build rubber. I wasn’t trying to door slam him on those restarts, I was just hanging on. He finally got me and I just let him go. On the next couple starts I could see I was getting better and better. Then, finally, the track instantly took. Our car was awesome. I could see him cranking inside the cockpit on all of his adjusters. It just wasn’t enough for him to free it back up. My car was tight too, but I’m glad it was only 40-laps, amazing effort.”

Bonsignore wasn’t even expected to be at the indoor event as he had planned on selling his equipment. Bobby Webber stepped in and purchased the car under the condition that Bonsignore would drive it in Syracuse. That was obviously a wise choice.

“Bobby Webber bought this car from me after Atlantic City and I wasn’t even going to come,” he said. “He told me that if you are going to drive it I’m buying it. I got to thank him for even being here tonight. I just can’t thank him enough, his whole team.”

With the win, Bonsignore moved closer to Rudolph as they both chase another Indoor Auto Racing Series championship. They came into the night just 21 points part. Now that gap has been closed.

“I don’t know how points work here,” commented Bonsignore. “It’s going to be tough because he ran solid second. If we win I think we win, we just got to do our best. We had that one rough race at Allentown otherwise we’d be in good shape right now. Obviously, we all have to thank Flores (high point man coming into the event) for not showing up. We’ll give it our best shot. All we can do is come out swinging and we came out swinging.”

As part of the weekend, Bonsignore and the team are raising money for Special Olympics through the Dream Ride.

“I mentioned it a few times today, but Bobby is raising money for Special Olympics through Dream Ride,” cited Bonsignore. “We are almost at $5,000 right now. It would be nice to get that over five grand. It’s been a great weekend.”

Rudolph Too Tight to Finish Off Win

Rudolph was good, but just not good enough to finish off Bonsignore for what would have been a record breaking ninth Indoor Auto Racing Series win. His car got progressively tighter and that proved to be his downfall.

Even though he didn’t finish the night off with the win, Rudolph was pleased with the effort and the race with Bonsignore.

“That’s about as good as a race as you can have indoors,” said the Ransomville, N.Y., pilot. “That was a good race. I wish I came out on top, but he had the better the car today. It’s another podium finish for us. We are really consistent, just lacking luck. I had the luck today but just didn’t have the car.”

Timmy Solomito had his best run to date in the Indoor Auto Racing Series. The pavement Modified star started back in ninth before falling even deeper in the field. He then rallied to end up in the final spot on the podium behind Bonsignore and Rudolph.

“We didn’t give up, we started ninth and fell back to 15th,” commented Solomito. “I jumped Andy J’s (Jankowiak) rear tire and lost a bunch of spots. I just kept picking them off one at a time. It’s just kept battling. That’s the short track racer in me, racing at Riverhead weekly. I just kept getting in there on the restarts. I was able get by Sesely there to get to third, I thought we might have a shot on the green-white-checkered. Erick and Justin have been doing this for so long, I haven’t even been doing it for a year. It was fun, hopefully we’ll have the same results as tomorrow.”