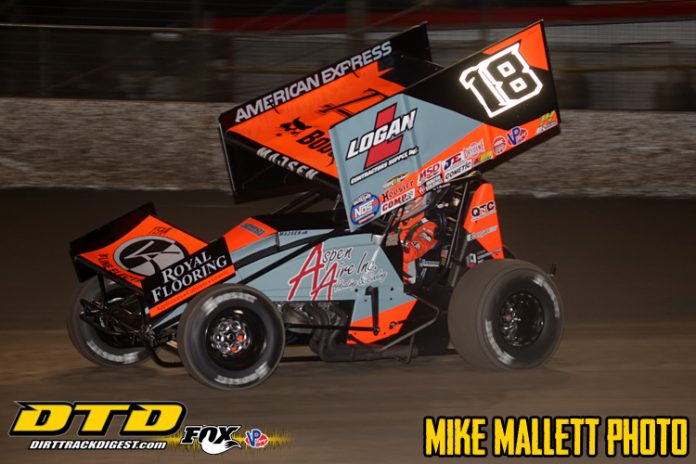 The Australian won everything there was to win at the third-mile Thunderbowl Raceway in Tulare, Calif., Saturday night. Not even a couple of rain showers could slow him down.

His team has been working hard to get the KCP Racing car better on the California short tracks, and “it showed tonight,” said Madsen, as he earned his first victory of the season with championship leader Daryn Pittman second and Sheldon Haudenschild in third.

Madsen, who hails from St. Mary’s, NSW, Australia, started the night fastest in practice — three tenths faster than second fastest Donny Schatz. He followed that up by claiming his second pole of the season.


Then he dominated the first Heat race of the night, crossing the line about one second ahead of second place Tim Kaeding. That led to him being the first driver to draw for the DIRTVision Fast Pass Dash and leaving seven other drivers disappointed by drawing the pole.

A heavy rain shower lingered over the track for about 15 minutes in between Madsen’s Heat and the Dash. It only made him faster. Again, in dominating fashion, he led every lap of the Dash, this time finishing close to two seconds ahead of second-place Pittman.

While he already dominated everything up to the Feature, Madsen showed his true speed in the final 35 laps of the night. He pulled away to an early lead, but “The Steel City Outlaw” Tim Shaffer showed muscle early on, keeping pace with Madsen. It didn’t last though.

By lap 10, Pittman slid his way underneath Shaffer for second and began to hunt Madsen. Pittman, coming off a heartbreaking runner-up finish in Las Vegas, looked to be the only driver all night who could contend with Madsen. While Madsen battled lap traffic, Pittman closed the gap between them to about a couple of car lengths.

And that was as close as he was going to get to the #18’s bumper. Madsen found his rhythm in lap traffic, pulling away to about a four second lead over Pittman, whose #83 Roth Motorsports car was able to close on Madsen again, but only to a second-and-a-half gap.

“Ian was good. We just got beat,” said Pittman, of Owasso, Okla. “I liked the track conditions before it rained, but it is what it is.”

Like Madsen, Pittman was unsure how he would perform at the Tulare short track, coming off strong performances at half-mile speedways.

“We were kind of curious how our car was going to shake out at a smaller place,” he said. “We kind of got both spectrums there of super dry early in the night and pretty wet after the rain and the car was really good.”

Both Madsen and Pittman drive a KPC Chassis, which is located nearby in Fresno, Calif.

Aside from leading every lap, Madsen’s dominance was showcased by him lapping the field up to 11th-place and catching 10th-place Donny Schatz toward the end of the race.

“It was just unreal,” Madsen said in almost disbelief, standing on the front stretch podium. “To get the clean sweep tonight is pretty awesome.”

Madsen’s best finish at Thunderbowl Raceway had been 12th. Of his previous three wins, the smallest track he had won at is the 3/8th-mile Deer Creek Speedway in Minnesota.

“I feel like we’ve been working hard toward this for the last two years,” Madsen said. “It’s really good to see some good results pay off.”

While Pittman finished second, he said he won’t hang his head on the finish. He continues to lead the Series’ championship standings over second-place Donny Schatz — adding 16 points to his cushion between the 10-time Series champion. This is the first time in the storied history of the California-based Roth Motorsports team it continues to lead the points through the Series month-long California swing.

The Series continues its trek through California next weekend on Friday, March 15, at Silver Dollar Speedway in Chico, Calif., and March 16 at the Stockton Dirt Track in Stockton, Calif.

Even though Madsen began the California tour dominating Thunderbowl Raceway, to him there is still a question on how he’ll perform at the upcoming races.

“We ran good at Stockton last year and Chico we’ve been hit or miss, so we’ll see what happens,” Madsen said. “Hopefully we can keep it (momentum) going through the Cali-swing.”