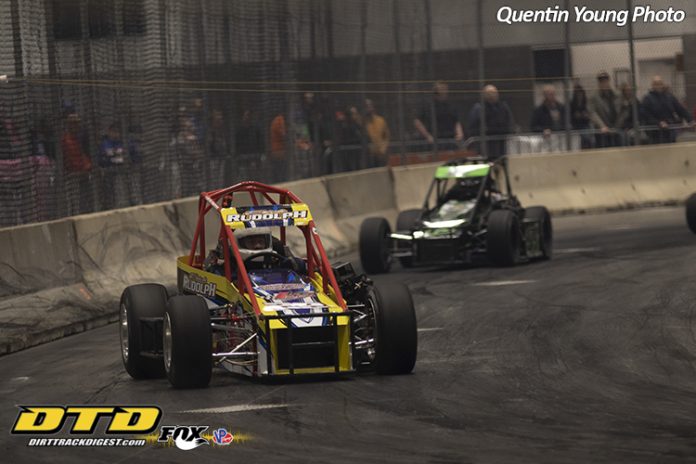 “Winning is what we want to do every time we take the green flag,” Rudolph said. “Tonight starting up front was a help but getting through lapped traffic and having good restarts were the keys to winning the race.”

Rudolph held off surprising Mike Bednar in the run to the checkered with Tommy Catalano, Andy Jankowiak and Eddie Strada completing the top five. Bednar passed Catalano for second on the final lap while Jankowiak suffered a flat left rear tire while contending for the lead early in the race. Strada started in the 12th row at the start and picked his way to a fifth place effort.

A spectacular accident at the midway point of the race saw Matt Janisch and Justin Bonsignore slam into the second turn fence while fighting for third place. Janisch flipped wildly while Bonsignore’s car ground to a halt against the concrete. Remarkably, Janisch was able to return to finish ninth; Bonsignore who had been a championship title contender was officially scored 19th.

The four TQ heats were won by Jankowiak, Rudolph, Kreutter and Anthony Sesely. The two B-Mains were won by Lou Cicconi, Jr. and Marc Johnson.

In Champ Kart preliminary race action, JJ Pacovich, Mike Perry and Dan Marsden were the winners of the heat races and Jake Nelke won the sole B Main.

Erick Rudolph won the TQ title, his fourth for himself and car owner Mark Lafler. Andy Jankowiak was second in the final rundown with defending Series champion Justin Bonsignore third and teammates Eddie Strada and Matt Janisch fourth and fifth.

Though winless in the Slingshot Indoor Series, Kurt Bettler outpointed Danny Buccafusca, Austin Silfee, Tyler Truex, who had come into the final race leading the points, and Jared Silfee.

The schedule for the 2020 Indoor Auto Racing Series Fueled By VP Race Fuels will be announced in the coming weeks.