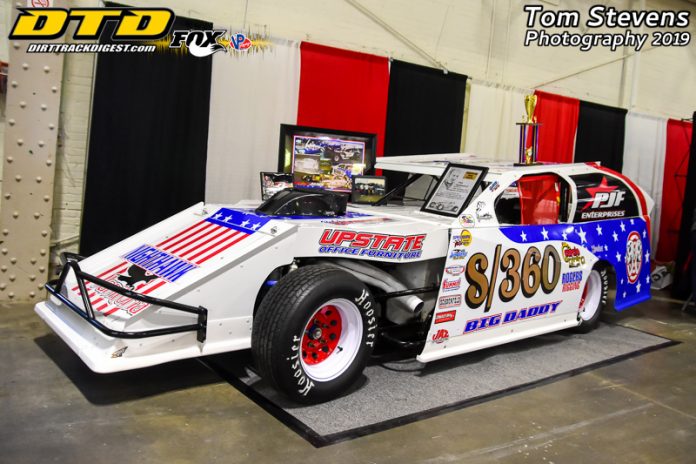 Syracuse, N.Y. was the destination for this road trip for Delores and I as we took in the 33rd edition of the Syracuse Motorsports Expo. It was the second edition under the leadership of Jeremie Corcoran after coming off a very successful first edition last March. We were there on Saturday and I have to say it was one of the steadiest flow of attendees I have seen in a long time.

The show had race cars of all types and for dirt an asphalt and of ones that go in a straight line. Many tracks were being represented as always and was good to see Five Mile Point and Fonda back at the show with booths. Sanctioning bodies were on hand with their schedules and representatives to answer questions. Collectibles and the folks there with the race parts and apparel were doing a big stroke of business. We spent most of all time between the Afton Motorsports Park (A.M.P.) and the Thunder Mountain Speedway (T.M.S.) booths when not walking the isles and visiting a couple other booths I was interested in. Delores spent much of her time also with her little buddy Nash the young son of A.M.P. Promoter Ron Ford.

“Big Daddy” Mike Stoddard had his beautiful tribute International Motor Contest Association (IMCA) car numbered S/360 in honor of his favorite race car driver growing up Don Diffendorf on display once again at the A.M.P. Booth. I want to thank him for taking the time with me so I can give you great folks more about the reason for the tribute and so you get to know more about the man.

Mr. Stoddard is a young 65 years of age and resides in Kattelville, N.Y. with his wife Shirley. Stoddard has a son Tyler who also races IMCA Modified a car owned by Mike, and also has a daughter Casie. Stoddard makes his living as an EHS Manager at Ametek located in Binghamton N.Y. The upcoming race season will be the start of his 41st season behind the wheel of a race car. Before starting his racing. Mike worked as a corner flagger at the Five Mile Point Speedway working pit road. Unfortunately, Mike got seriously hurt by a racing incident and broke his leg among a few other injuries. During and after recovery he started thinking of a different option to stay in racing. He started in the Street Stock division and got his first feature win after thirteen seasons in 1990 which stands out as a career highlight for him. The other highlight he did mention was just how proud he is of his son’s racing. Since switching to the IMCA division Mike has garnered twenty-five feature wins giving him his total as of this season of twenty-six. Note here Mr. Stoddard had to set out last race-season due to some serious health issues but is raring to go here in 2019. Setting out last season was a very low point in his career as he hated to watch and not be out there mixing it up on the track. He did however realize that he is a pretty good car owner though as son Tyler won the track championship aboard the car Mike would have drove his numbered (23) machine. Once Tyler got out of his dad’s owned (32) it was renumbered (3n) for crew member Bill Nichols to race that machine. It was the first time Nichols ever raced these types of racecars but have been successful in the past in small type sprint cars. Nichols did capture a feature win as he progressively improved weekly. Mike plans to race A.M.P. T.M.S. and the memorial race for the late Mike Stolarcyk event dubbed Little Mike’s Race to Win held annually at the Five Mile Point Speedway.


The racecar this season is having the number S/360 as his number of choice as he made a tribute to his childhood hero Don Diffendorf. Diffendorf also known as (Diff) was a Southern Tier icon on both asphalt and dirt and traveled to many other tracks back in the day when there were not many travelers per say. The car had a wrap similar to some of the cars Diff had raced in the past and Mike had displayed on the car. Mike’s dad was a good friend of Diff and use to take Mike to the races to see him race and at one point got to ride in the car at a very young age hooking him right then and there. Mike’s dad died when he was eight years old and his mom who also was a race fan kept taking him as often as she could. Diff was like a second father to Diff so you can see the influence that he made on a very impressionable youngster. Good reason and note for all drivers in all classes to take time to spend with the youngsters and hook them now.

The T.M.S. booth I took the opportunity to catch up with 600cc Modified (8) wheel twister Doug Windhausen. Doug along with his wife Meghan and two daughters Layla and Lily make their home in Fabius, N.Y. Windhausen works construction at his dad’s construction business, RJ Windhausen Construction who was the first-generation driver and a damn good one here in the Southern Tier behind the wheel of the larger cars that being a Late Model. Doug is going to be turning 27 later this month and it will be his sixth season behind the wheel all in this division. He has eight feature wins to his credit with five coming last season at the T.M.S. which he considers his highlight so far in racing. Win number one came in 2014. I asked what his low point in racing has been so far and he told me it was his first time on the track. He went to Five Mile Point and flipped downed the backstretch and that is what you call getting yourself initiated in a hurry.

The beautiful car on display at the booth like last year was sporting sail panels and I would love to see this rule take effect for this division as it makes them really sharp in my humble opinion. Sponsorship comes from MJD Associates, Bob Hilbert Sportswear, Amber Well Drilling, Terrell’s Potato Chips, Curt’s Heating & AIR, Prestige Spray Foam, Hart’s Rifle Barrels, MJS Drywall, D&E and of course dad’s RJ Windhausen Construction. Crew help besides dad and wife Meghan is Kevin, Lance, Joey, Fluff, Mickey and Tyler. Plans for the season are T.M.S. full time and all the specials for his division at the Skyline Raceway. He would later win Best Appearing Car and a brand new Champion Generator.

Other cars on display in the packed T.M.S. booth were the three other 600 Modified cars that were on display last weekend at the Oakdale Mall and they were the (17a) Chris Jordan (17j) James Randall, and the (17c) of Chelsie Lynn. Modified cars of (46) Jeremy Smith (16) Mike Bowman and the (30) of Kenny Hammond minus sail panels. Returning to racing this season and racing in the Open Sportsman division will be the (8) car of Cody Bishop.

I visited the Outlaw Speedway booth and checked out the sweet looking ride of the (713) that Tommy Collins will be racing there. Collins also will be making a return to the tough Crate 602 division at T.M.S.

Spent some time also over at the booth where I try to spend my Sunday nights and that is the Utica-Rome Speedway (U.R.) the speed-plant on Route Five in Vernon, N.Y. Only got there a couple of times last season due to a couple Sunday special races at T.M.S. and the bad luck of U.R. with their rainouts. A.M.P promoter Ron Ford and U R promoter discussed the possibility of having the Street Stocks coming to U.R. to run with the Pro Stocks in a challenge like the Pro Stocks going to A.M.P for a challenge race on Friday May 17. I for one would love it, as I have wanted to see this for quite some time. I really would like to see a four-race series with two at each track with a sponsor to add a little point fund for the ones that would support this and see if it could grow. I will help wherever I could to see this happen.

Georgetown Speedway for the start of the Bob Hilbert Sportswear Short Track Super Series (STSS) for the Modified and the Crate 602 Sportsman South Region. The races are Friday and Saturday and the extended forecast looks DYNOMITE. Go on the STSS web page for all the times, divisions and pertinent information. Always a don’t miss event.

The final piece of news but certainly not the least is coming up on Saturday and Sunday March 23 & 24 is the second edition of Speed Sport Showcase. The Sunshine Plaza on Route 315 between Scranton and Wilks Barre, Pa. It is within a couple of miles of the Mohegan Sun Raceway & Casino. The promoters have many activities planned highlighted by a Penn Can Speedway Reunion and the Miss Speed Sport Showcase Pageant