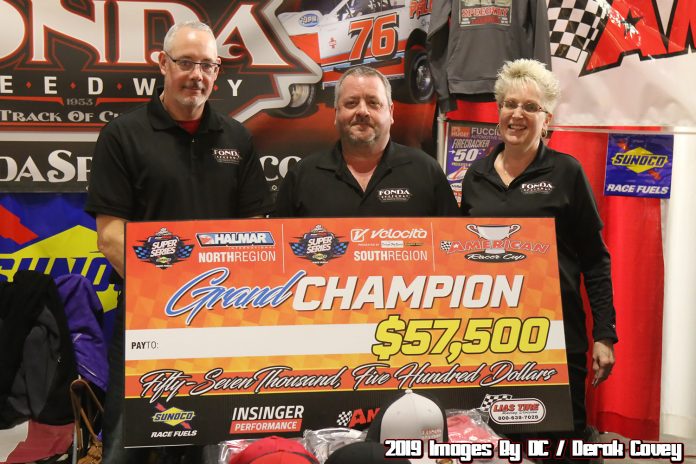 Jamie and Denise Page are no stranger to running a race track. The duo had a successful tenure at the track currently known as After Motorsports Park. When they stepped away from that venture they stayed in motorsports by building a race team with J.R. Hurlburt as the driver.

They’ve enjoyed race car ownership, and that will continue, but the husband and wife team has decided it’s time to get back into the race track side of things. Over the off-season they agreed to work with Georgetown Speedway and Short Track Super Series promoter Brett Deyo at the Fonda Speedway as they assume the title of operations managers. They’ll handle some of the day-to-day issues that Deyo is unable to take care of when he’s not able to be in New York.

“We are really happy to be back on board and be involved,” said Jamie from the Syracuse Motorsports Exposition and Trade Show over the weekend. “Obviously we’ll do our thing with J.R. Hurlburt with our car on the Deyo Series stuff. We just lacked that other piece of being involved and trying to be successful. I think we were at Afton and we kind of missed the people. We always dreamt of having what I call the ‘dream team’ with Deyo involved in things. He takes care of a whole bunch of stuff that we weren’t that good at. With Denise and I, we were a two man band. It was tough to get all that other stuff done. With Brett and some of the people he has, it’s going to be very exciting for us. I’m glad to be a part of it.”

The family and Deyo have become close friends over the years after Deyo staged several Short Track Supernationals events at their track in the Southern Tier. That friendship grew as they ran the series with Hurlburt. As a result of the relationship between them, it made the decision a no brainer, especially for Denise.


“We’ve become very close with Brett and his whole group,” commented Denise. “We’ve become good friends and when Brett asked us if we’d be interested in helping out at Fonda I said yes before even talking to Jamie. We’ve enjoyed running his series and now we are really excited to team up with him to run Fonda.”

Both of them know going from Afton to Fonda will be a very different dynamic. Fonda Speedway is one of the most historic facilities in the country. Richard Petty and Steve Kinser have joined the likes of Jack Johnson, Lou Lazzaro and Dave Lape to compete at the track. It’s a speedway rich in history.

“You know I wasn’t much of a history person in school, but that kind of history is really awesome,” joked Jamie. “The excitement of Fonda just being what it is, the history there. Brett is bringing that to the forefront. It’s really exciting for me just to be involved in stuff that I never really knew.”

The pair know that it’s going to take a lot in the modern day to get people back to the track. They have so many options and things they want to do. They hope some of the changes they institute will help draw back fans to Fonda.

“We really need to get people back to the race track,” stated Jamie. “There is so much information that is out there. You can see it instantly. People need to realize that if they want racing around they need to support it. We are hoping with our reasonably priced gate that people come. We hope to get them in the seat. We are going to do our best to get people in and out in three hours. We know that people’s time is valuable.”

With Jamie focused getting people in and out, Denise will place most her attention on the concession stands. She wants to make sure people can come to the track and afford to eat while getting a quality product. Something she was known for while at Afton.

“I’m looking forward to the challenge,” said Denise. “It’s a lot of people to feed and I intend to get it done. We are doing our best to keep it reasonable for the family to come. You can’t have stuff overpriced where they can’t come and feed everybody. My goal is to keep prices down and serve a quality product. I don’t serve anything if I haven’t tried it. We do a lot research before it goes out the door.”

For Deyo, he knows Jamie and Denise are more than capable of being able to handle the load. They proved that when they ran Afton and he couldn’t think of two better people to support his efforts at Fonda Speedway.

“Jamie and Denise were the perfect match for what we needed at Fonda,” mentioned Deyo. “They ‘get it.’ I was always blown away by the condition of the facility during their time at I-88. The place was immaculate. The food was the best in the area. I know people will come to Fonda to eat this year with Denise in charge of the food. They are talented, hard-working people and good friends. I’m thankful to have them on board.”

Jamie, Denise and Deyo will swing open the gates on April 13 for opener practice before the season officially gets underway on Saturday, April 20.