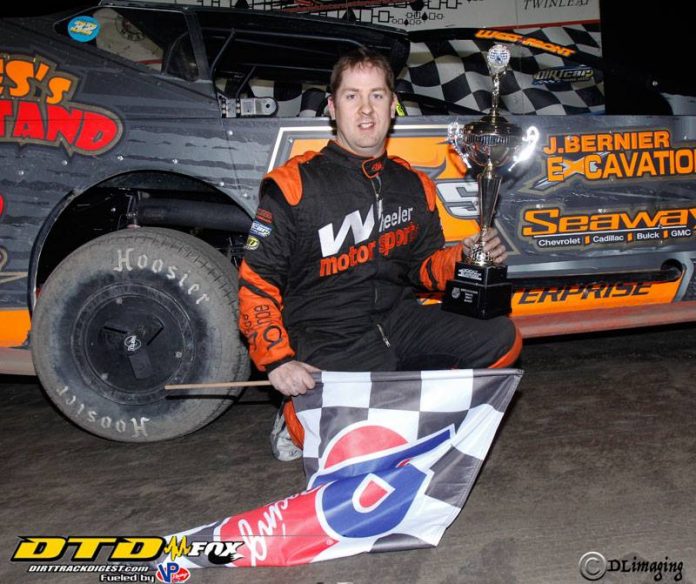 The foundation to Corey’s racing career was probably spawned growing up in a family where his mother worked at Kirkey Racing Fabrication and his father was an avid racing fan.

Corey explains, “I didn’t come from a racing family per se, but my dad was always a big race fan, and my mom worked at Kirkey Racing for over 30 years, but this probably is what drew me to get involved in racing.”

During the summer, it was a regular occurrence to see Corey alongside his dad at the Cornwall Speedway taking in all the action and whatever experience they could.

At the age of 13, Corey wanted more than just being a race fan in the stands, so he approached Brian “Slim” McDonald to see if he could help out on the race team.


“I just walked over and asked Slim if I could help on the car and we have been great friends ever since, “ said Corey.

From those early years working on the McDonald racing team, Corey learned the ropes, eventfully leading him to start racing his own car in the Mini Stock class at the Cornwall Speedway in 2005.

For Corey, success came quickly in the second year of the Mini Stock class. Corey was more or less the dominant planer in 2006, which earned him his first track championship at the Cornwall Motor Speedway.

The following year, Corey stepped up into the Pro-Stock and would remain in that division for several years. Over that time, Corey would seek helpful advice from Joey Ladouceur, Ryan Stabler, and Gilles Godard. But as Corey mentioned, “If it wasn’t for Joey I don’t think I would be at the level of racing that I am today. He definitely was a guiding factor.”

Corey along with Ryan, Joey and Gilles would have a great track rivalry for the next few years at Cornwall Motor Speedway, also leading to a great friendship amongst the four, helping one another out on and off the track.

The 2010 season saw Ladouceur and Wheeler battle for the championship over the entire season at Cornwall Motor Speedway. In the end, Corey finished second in points. He gained a tremendous amount of experience that year which would play out in later years.

In 2012, Corey moved up into the Sportsman Modified ranks and would challenge for the championship at Cornwall in his rookie season. Just weeks into the season, Corey picked up his first of three wins that year. Eventually, Corey would finish second in points in his rookie season at Cornwall Speedway and was awarded the rookie of the year at the Speedway’s yearly awards banquet.

For the next two seasons, 2014-2015, Corey would dominate the Sportsman field at both Cornwall and Mohawk Speedways, capturing the championship at both tracks — something that has yet to be repeated by any other driver.

In 2016, Corey once again moved up in class — this time into the 358 Modified division. As in past seasons, Corey raced weekly at Cornwall along with Mohawk and picked up his first 358 Modified win, late in the season at Mohawk. He would eventually finish third in points at Mohawk and was awarded rookie of the year at both Mohawk and Cornwall Speedways.

Corey would pick up three more wins during the 2017 season

This season, Corey is sounding more optimistic with a greater sense of vigor with the recent family addition of Corey’s family – his son Owen Wheeler. This addition to his family is definitely bringing a spark of excitement for the upcoming season.

The team has expanded its motor program in the hopes of getting some better results over last season, and will test these improvements in the coming weeks at Utica Rome Speedway during the DIRTcar 358 series race.

This year’s car has less than 10 races on it; however, Corey has gone through the car from top to bottom, putting the team in a comfortable starting point to the season.

Corey stated: “This season we will primarily concentrate all our efforts at Cornwall Speedway in the chase for this year’s championship. From time to time we will also race special events at other tracks such as the Brockville Speedway’s Ogilvie’s Series and at Mohawk. But Cornwall Speedway will see our main efforts for this season”.

I asked Les Winters, Corey’s main sponsor, and long-time friend, about the team’s plans for this season.

“Yes our main goal is to strive for the Cornwall Speedway Championship, We are also planning to race the entire 358 DIRTcar series and will be acquiring a new 2019 Bicknell chase shortly after the first series race which kicks off at Utica- Rome Speedway on May 12. For me, racing the series is all about winning an ‘eagle’ as our family has been involved in racing for many years. I hope this year, we can finally bring one home,” explained Les.

As we are just weeks away from the opening race for Wheeler racing, the season is looking bright and, with any luck, they may achieve at least one of their goals.

Corey explains: “I would like to thank my extremely dedicated crew, Justin, Joel and Matt, along with my best friend since the age of five, Ryan Stable, Les and my wife Shawna, for without their support and encouragement, following my dreams of racing would not be possible”.