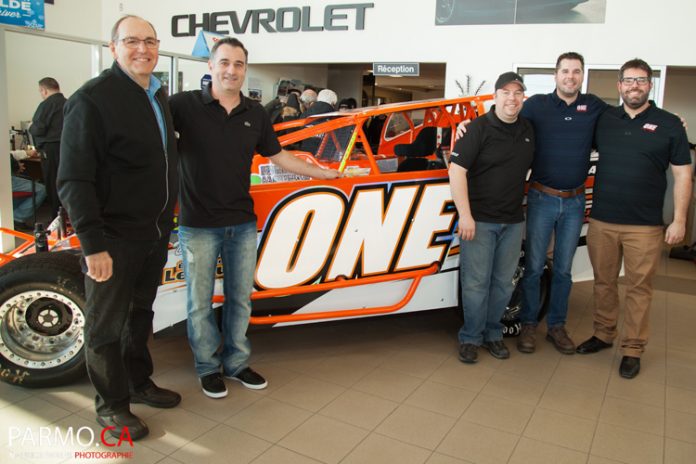 SOREL-TRACY, QUE – After more than 40 years, the renowned ONE Racing team adds a second driver to its line-up. David Hebert, driver and co-owner of the ONE, will team up with former 358 Modified DIRTcar champion, Mario Clair, who will be behind the wheel of the n°22 GM Paillé car at RPM Speedway.

In addition to the iconic ONE car, the team will prepare a second Modified car that will bear the colors of Canada’s # 1 GM truck center. Mario Clair will be a full-time contender to the RPM Speedway championship, at the wheel of the n°22 car with a brand new W16 spec engine.

“The co-owners and I have discussed with GM Paillé and Mario Clair for a few months to create a two-car team for the RPM Speedway. We believe that the addition of a driver of Mario’s pedigree will make us even more successfull. We worked all winter to gather funding,” explained Alexandre Voghel, co-owner of the ONE.

GM Paillé renews his sponsoring agreement with the team, which will start its 42nd season later this year. The support from Canada’s # 1 GM truck center enable the team to participate in the full Autodrome Granby and Autodrome Drummond’s championships with the ONE, as well as all the races at RPM Speedway in St-Marcel-de-Richelieu with both cars.

“GM Paillé’s support allows us always to go further and to try to be the most competitive that we can. We are happy to have a sponsor who has been so passionate and who has been willing to follow us in our big ideas for five years,” explained Mr. Voghel.


GM Paillé was also very happy to announce the renewal of this highly exciting championship with the ONE.

“It’s still passion that drives us, and therefore, it’s natural for us to help people who are passionate just like us and who always wants to push limits further. Today’s announcement is a great example. I’m happy that our colors will be proudly defended on both cars,” said Jean-Claude Paillé, CEO of GM Paillé.

Both drivers are also very excited to get back on track in 2019.

“I’m very happy of this new deal. Mario Clair is not only a friend, but also a strong competitor. I’m convinced that we will have fun to run for the same team and that he will bring his experience to contribute to our collective successes,” said David Hebert, who has the most wins (118) in 358 Modified since 2008.

On his part, Mario Clair, 2008 358 Modified DIRTcar Champion and many times track champion in Quebec, was delighted of this new association. “It’s a great day for me. I’m happy to join a successful team with experience and capability to win. I’m convinced that David and I will make a great team,” said Mario Clair.

Serge Desjardins back as car chief

Serge Desjardins, who was the owner and crew chief of the ONE for the first 40 years, will be back with the team. He will help the team’s crew chief, Stephane Paré. “I’m glad that Serge is back with us. His deep understanding of our cars will be a desirable addition to our team, and I think we can be even more successful with him,” said Hebert.

“For a long time, to work with Serge Desjardins has been a goal for me. He is a passionate who won almost everything he could in 40 years. With Stephane, David, Serge and the whole team behind the ONE and n°22 cars, I’m sure that we can achieve very good results,” concluded Mario Clair.

ONE racing team also unveiled its 2019 schedule. David Hebert will try to take back his crown at Autodrome Granby, and he will participate in all the races at Autodrome Drummond and RPM Speedway. For the latter, he will team up with Mario Clair, who will drive the Paillé n°22 car. The team also tries to gather financing to take part in Super DIRT Week at Oswego Speedway with David Hebert. ONE Racing team will start his 42nd season on May 10th at Autodrome Granby and will participate in almost 40 races this season.