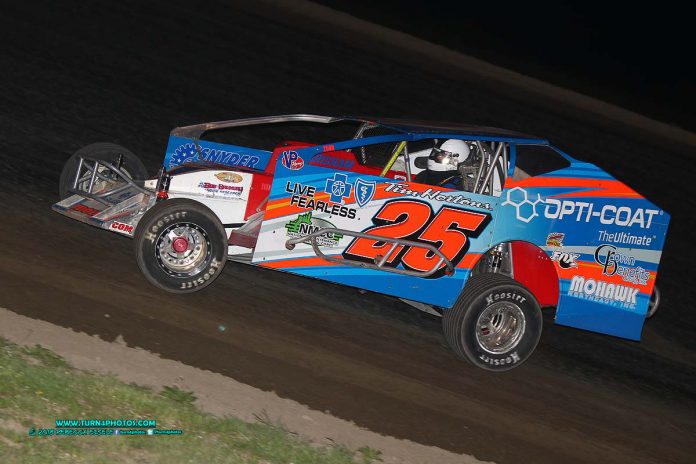 Concord, NC – The Super DIRTcar Series has not turned a lap at the legendary half-mile Can-Am Speedway since 2009, but that all changes on Saturday, April 13, 2019 when the Big-Block Modifieds come to town for the $10,000-to-win Thunder in the Thousand Islands 100  NAPA Super DIRT Week XLVIII Qualifier. Drivers and fans are excited for Can-Am Speedway to break the ice on the 2019 Super DIRTcar Series Championship points season.

After a highly competitive DIRTcar Nationals preseason event at Volusia Speedway Park, it’s anyone’s guess as to who takes the first NAPA Super DIRT Week XLVIII Qualifier of 2019. Super Matt Sheppard visited Victory Lane in the last Series race at Can-Am Speedway a full decade ago. Sheppard is prepared to pick up where he left off in 2018 with an early season statement at the big half-mile speedway.

Will a new face on the Series circuit can come out swinging? Anthony Perrego showed strength throughout the DIRTcar Nationals. His Graham Racing operation is keen to add another marquee event to its win list. Other Rookie of the Year contenders like Ryan Godown, Demetrios Drellos and Jack Lehner are hungry to kick off the season with a first career Series win.

For Britten, driver of the No. 21a. from Queensland, Australia, he has a vivid memory of his first time racing at Can-Am Speedway. He’s happy to see the Series is returning to the track he where made his first Big-Block Modified start on US soil.


“I remember it like it was yesterday. It was the first ever place I raced at in the United States, and I’ve never even been back since. I enjoyed the one time I did race there. Everybody knows how big the place is. Coming from Australia, I was used to racing on quarter-mile bullrings. Now it’s my first race in America, and it’s at Can-Am! It was a little bit of a shock to the system.”

Britten made the show, but his luck ran out in the Feature.

“Unfortunately, my feature race got cut short because a guy broke going down the back straightaway and I ran into him, bending some radius rods. It wasn’t a favorable end to my race but nonetheless but I remember what the track was like and I look forward to getting back there. I think it’s good that the Series is getting back to some of these tracks.”

The Thunder in the Thousand Islands 100 is the first of seven NAPA Super DIRT Week XLVIII Qualifiers, which all pay at least $10,000-to-win. A large field of Big-Block Modifieds is expected to enter the race in addition to a strong contingent of full-time Series drivers. The DIRTcar Sportsman will also fill the pits with a special $1,000 to win event. Race fans in the Northeast have had April 13, 2019 circled on their calendars for months. Make your plans today.