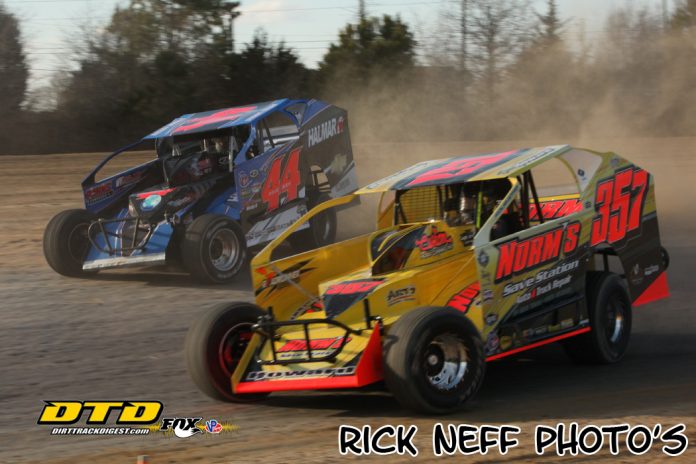 GEORGETOWN, DE – Following the war of tire attrition that took place Saturday night, many drivers and fans wondered what Sunday afternoon would bring at Georgetown Speedway.

The track crew at Georgetown answered the call and an outstanding daytime racing surface was prepared for the Sunday matinee, which had been postponed by rain from Friday night.

Oley, Pa.’s Duane Howard and the Norm Hansell Motorsports team continued their affinity for the Georgetown oval, topping the 30-lap Sunoco Small-Block Modified event on Day No. 2 of the Melvin L. Joseph Memorial weekend. Howard earned $4,049 for his efforts in front of a healthy Sunday afternoon crowd.

Howard launched off the pole for the main event, but his victory was far from easy.


Howard led the field to the green flag. Fellow Oley, Pa., driver Craig Von Dohren was on the gas early. Von Dohren moved from his fourth starting position to second on the first lap before the yellow flag fell. On the ensuing restart, CVD took the lead from the outside and the chase was on from there.

Von Dohren led a close following duo of Howard and the hard charging Billy Pauch Jr. in the Rick Holsten-owned No. 96. The trio pulled away from the rest of the field and caught the tail end of the field by lap 11. For the next five laps, the top three went high, low, and through the middle to get through lap traffic before a spinning Roger Henion Jr. brought out the yellow.

“Racing through the traffic was really fun,” Howard said of the intense laps on the semi-banked half-mile oval. “We had a really good track to run on today.”

On the ensuing restart attempts got interesting. First, the problems occurred in row two, where Pauch Jr. and the Richie Pratt Jr. made contact, sending Pauch Jr.’s car over the edge of the track and outside the top-10.

Howard and Von Dohren then battled each other hard with Howard losing spots and showing displeasure with longtime rival CVD. However, due a spin in the back of the field, the lap and positions lost were nullified.

Howard powered into the lead on the next restart with 13 laps to go and was never headed for the remainder of the distance.

“It’s nice to get a win early,” Howard said afterward. “This team is poised for a really good year. I have to thank Norm (Hansell) for providing this equipment.”

Von Dohren’s Dick Biever-owned No. 14s, which had shown signs of smoke at times in the second half of the race, held on for second spot followed by Pratt of Woodbury Heights, N.J., in a solid effort for the Daniel Sommeling No. 51 team. Returning to the family owned No. 71 for the day, David Van Horn Jr. of Harmony, N.J., snagged a fourth-place result, with Frank Cozze of Wind Gap, Pa., completing the front five.

Michael Duritsky made his long haul from Masonville, Pa., worthwhile leading every lap of the main event. Duritsky made the trip for second weekend in a row, being one of the 72 cars in attendance for last week’s Open Practice day.

Matt Glanden of Denton, Md., didn’t have quite the day he was looking for. Following a spin on lap four, Glanden was coming back through the field when the No. 11F of Ryan Frazee went around in turn four. Glanden hit Frazee nearly head on, and wound up on his roof. Both drivers were uninjured.

Following the only red of the day, and multiple restarts on lap eight, things settled down and the field went the rest of the way caution-free. “I was worried on all those restarts, but I knew if I held my line I’d be alright,” Duritsky would say of his seemingly stress-free race.

Georgetown native Ross Robinson drove the Daniel Hudson-owned car to a second-place finish, besting Mechanicsville, Md., driver Dale Hollidge to the line by three car-lengths. Hollidge now has a RUSH-legal crate engine at his disposal for special events in the area. Amanda Whaley and Tyler Reed completed the front five.

The Delmarva Chargers also came out for the second consecutive day with Ashley Merritt getting her first win since a six win-season in 2014. “It feels awesome. This is my favorite track and I’ve been trying and trying to win here again,” she said in Victory Lane.

GEORGETOWN NOTES: Saturday night’s winner Stewart Friesen was up to fifth from his 12th-place starting position before pulling off with apparent rear end issues on the Halmar International No. 44….

Matt Sheppard, Andy Bachetti, and Wade Hendrickson were the three cars failing to make the green flag after all suffered engine issues in their respective heat races. A field of 31 cars started the main….

The cars of Ryan Watt, Joseph Watson and Brad Roberts all showed signs of smoke at different times during the 30-lap Small-Block event….

Did Not Start: Matt Hill.