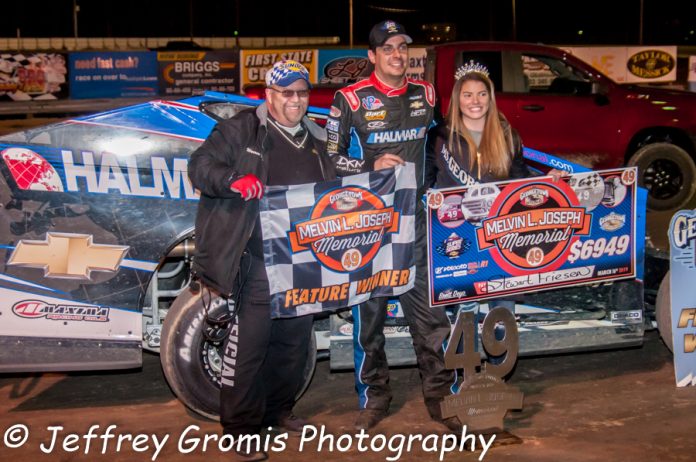 Stewart Friesen has been around long enough to have been involved in several events where the win comes to survival. The Sprakers, N.Y., driver is a multi-time winner at Syracuse, he’s won the Eastern States 200 and a handful of other races that tire wear is an issue. That issue popped up Saturday night at Georgetown Speedway in the Short Track Super Series South Region opener. Everyone that made the starting field was forced to change at least one tire, sometimes more than that. Friesen did just that as he was able to overcome his flat before holding off a hard charging Matt Sheppard to earn his second career STSS win at Georgetown.

“I wasn’t sure how it was going to play out,” stated Friesen afterwards. “The first couple cautions I saw guys had some pretty extreme wear happening. I figured I was probably worse than that the way the car was handling. It was just a weird deal. We weren’t very good on the first set of tires. We put the second set on and got a lot better handling. We able to filter up through and hold off Sheppard there late which was huge.”

Friesen got his flat on lap 24. He headed to the pits and changed both rear tires on his DKM No. 44. He returned to the deep in the field. A couple of jingles, a few more flats later and Friesen was nearly back in the top five by lap 29. That was the difference maker as he was the first with a flat to filter their way back through the field.

“After we got our flat we got them in bunches,” mentioned Friesen. “We got six or seven when they all got together in four and then we were able to grab another bunch as another accident happened. We kind of filtered up to sixth. The guys had bald tires and we had fresh stuff. I was just hoping when we got to the front that guys that got tires weren’t coming up through with a head of steam. I knew Matt got his flat quite a while after we did. It wasn’t an artistic success by any means, but we’ll take it.”


Friesen was able to overtake Duane Howard on a restart on lap 31. Howard later returned the favor taking the lead back while running on a nearly smooth right rear tire. Friesen used another restart to get by Howard to resume command of the race. He was much more careful on restarts after that making sure he maintained the advantage.

“I snoozed on the one restart and let Duane get alongside of me,” commented Friesen. “I knew he was on a bald tire so I wasn’t trying to push it then. I didn’t want that to happen again so I tried to get the jump on the restarts and go as hard as I needed but still keep it straight to save it if I needed it.”

The end of the race came down to a fight between Friesen and Sheppard. Sheppard had the fresher of the tires, but unlike Friesen, he was only able to take a right rear tire during his pit stop after the jack broke. Sheppard got to Friesen several times, but Friesen was up to the task keeping him at bay.

“He was fast in the heat race,” Friesen cited of Sheppard. “Those guys have been fast in the Short Track Series races. Even last year, he beat us pretty bad at Susquehanna (BAPS Motor Speedway). I knew it was going to be tough to hold him off. I just had to run a smart last 10 to 15 laps.”

He was flawless over the final handful of laps to score his 13th career Short Track Super Series victory. It was his first since last June at the Outlaw Speedway.

Friesen will be back in action this coming Sunday as the Short Track Super Series returns to the Port Royal Speedway.