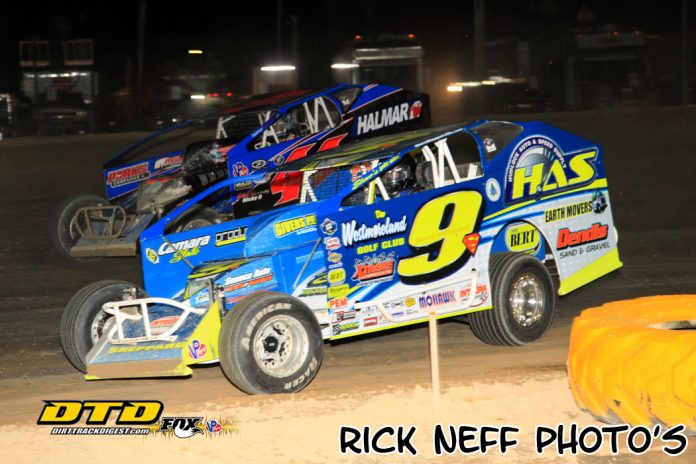 For the second year in a row, Matt Sheppard was once again a bridesmaid in the “Melvin Joseph” Memorial race. Last season Sheppard led a good portion of the event only to get caught behind a lapped car to allow Ryan Watt sneak around him to take the win. This year’s race played out a little differently but the end result was the same as Sheppard marched back through pack after pitting for flat right rear tire just after taking the lead to once again finishing second to winner Stewart Friesen.

With a very abrasive track due to the extreme sun and wind during the day, the American Racer tires just could not stand up to what was asked of them leading to tire issues for every team in the field. After pitting from the lead on lap 17 to change a right rear tire, Sheppard worked his way back towards the front, but used up the new right rear tire in the process and just didn’t have enough to make a pass on Friesen for the win.

“That sure was a crazy race for sure”, mentioned Sheppard. “Even after changing the tire midway, the one we put on is bald. It wasn’t a good show, there were destroyed race cars and tires. I mean we got to the lead, lost a tire and basically it boiled down to not having hard enough tires. They weren’t selling anything hard enough, maybe some guys brought some harder tires they had but we just didn’t have a hard enough tire for today’s conditions.”

Sheppard went on to discuss the track conditions and what he thinks they need to do to not have a repeat for Sunday small-block race.


“They didn’t do any track prep before the feature and it turned into a race of attrition”, explained Sheppard. “I hope they disc it overnight and put some water in it. They probably should’ve done that tonight before the feature.”

Unlike the winner Friesen who changed both rear tires when he pitted early for his right rear flat, Sheppard only took on a right rear but not by choice. The No. 9 team had planned to change both rear tires, but the jack broke when the team went to change the left rear causing them not to be able to accomplish their mission.

“I thought if I would’ve changed the left rear also, I might’ve been able to get by Stew for the lead but who knows.”

Two-time defending Short Track Super Series champion Ryan Watt started his title defense off with a solid third place finish. Like all driver, Watt had to battle the track along with his competition and at race’s end was happy to get their 2019 season off and running with a good finish.

“We had a good car for the feature especially when we had good tires on it”, stated Watt. “After we changed the tires, the car was super-fast, but we just wore them out coming back through.  When we got to third there was just nothing left to race with Stew and Matt. This track is never like this, but I guess the sun and wind today just killed the track. It was definitely an entertaining race for sure.  It was probably the longest race I ever ran as well. Overall our car was really good, I just got bottled up early on and couldn’t get the outside to work because they were all running the bottom and throwing marbles up top, but eventually the track started widening out where I could make some moves. It was a good start to the season and hopefully the track will be much better for tomorrow.”

Like Sheppard and Watt, Billy Pauch Jr., survived with his Pascaul Racing ride to finish in the fourth position.  He was hanging on at the end and was happy to get fourth.

“We ended up getting to fourth,” stated Pauch.  “It wasn’t a bad day.  We timed third, finished third in our heat and just kind of stayed there.  We got up to fifth in the feature and felt the tire go down.  I literally was practicing for Eastern States this weekend.  I survived, lets leave it at that.  We’ll take a fourth.   This isn’t how Georgetown races.  I hope people know that.  We’ll come back.”

Pauch was happy to shake the rust off after not racing since December.  He had a busy off-season which didn’t allow him the chance to race as much as he would have liked.

“I took the winter off,” cited Pauch.  “I haven’t raced since December, which is unusual for us.  We ended up building a house and did some other things.  We shook the rust off, which is good.”

Fourteen-year-old Alex Yankowski came to Georgetown last season and took home top honors in the Sportsman feature setting the tone for a spectacular 2018 season for the teenager. With over a dozen wins and two track championship in 2018, the team made the decision to move the youngster up the to the Modified ranks for this season. Yankowski and his No. 84y team did themselves proud as the STSS rookie hung in there all day taking home a solid 10th place finish.

“Considering we were against all those big-blocks with a 364 ci small block, I am really happy with that finish,” explained Yankowski. “We struggled in the timed dashes and started fifth in our heat and finished fifth which was okay. Then we struggled in the consi, but made it in to the feature and that’s where I think we showed we had some speed. I was just trying to keep my nose clean and then the door got smashed in. We were up inside the top 10 when I had to come in when both the left and right rear tires went flat. After we pitted, we made it back to finish tenth so yeah, we are very happy with that. Definitely a big power difference from motor we tested here last week, unfortunately we hurt that motor and had to put the one we used today.”

Racing against your peers is awesome but when you are able to race against your heroes it means a lot more. As a young teenager, Yankowski is doing just that. He’s racing against the likes of Stewart Friesen, Matt Sheppard, along with his local heroes Duane Howard, Craig Von Dohren and Jeff Strunk. The kid doesn’t seem intimidated at all, but every now and then you can see the youthful enthusiasm that comes with being fourteen.

“Stewart Friesen is one of my favorite drivers and to look over and see him lining up next to me on a restart is definitely pretty cool.”

Danny Bouc’s season didn’t get off to the start the Pondish Racing team was hoping for. With high hopes coming into the race with a new Bicknell chassis along with a fresh motor, the teams hopes ended on lap one of their timed hot lap session when the motor started billowing heavy smoke entering turn three. The team pulled out the car they had planned to run in this weekend’s small-block race.  After not qualifying they used a provisional to get in the feature. Unfortunately the car ended up breaking an oil pump belt during the feature ending their night. The No. 6 team has decided to go home and not run the car in Sunday’s small-block race…

Jeff Strunk also had to use the teams small-block car Saturday when he heard a noise coming from the motor during hot laps. Deciding not take a chance on hurting the motor, the Hyneman No. 126 team made the decision to run their backup small block car…

Surprise entrant for Saturday was the Petruska & Sons Atlas Paving No. 66. The team brought back driver Danny Johnson to pilot the car for Saturday’s race. Unfortunately for the team their day ended with a DNF…

Billy Decker took a wild ride midway through the feature event.  Decker’s Smith Racing No. 91 went for a series of flips down the backstretch before coming to a rest on the car’s roof.  Decker was able to walk away from the incident unscathed…

Ryan Godown’s car had to be cradled off the track after a nasty frontstretch crash on lap 48.  Godown got together with several other cars virtually destroying his Deiter Schmidt owned ride.  The team was forced to borrow an open trailer to get the car home as they could not get it back inside their enclosed hauler.  He was also uninjured but dejected afterwards…

Anthony Perrego had a stout car early in the feature event leading several laps before blowing a tire.  Perrego returned and was working his way forward when something let go in the rear of his No. 12 forcing him to be towed to the pit area…

HJ Bunting pitted multiple times for tires during the feature.  Bunting returned to work his way back into the top five.  As the race neared conclusion something let go on the rear of his ride causing him to give up a top five run.