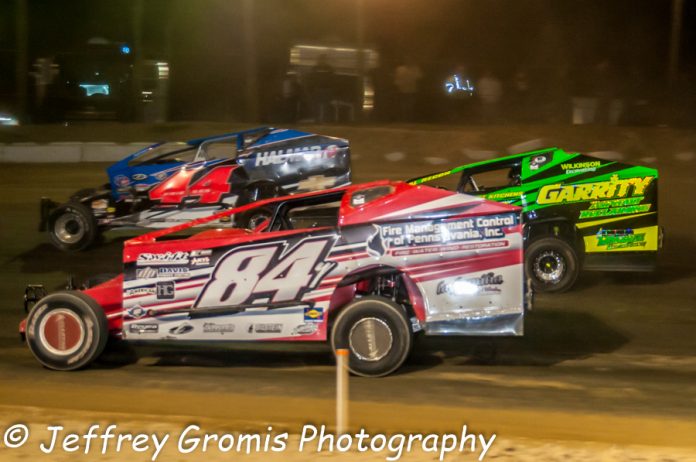 March 15 Delores and I headed off to Georgetown Speedway in Georgetown, Delaware. It was to be night one of the Brett Deyo promoted Bob Hilbert Sportswear Short Track Super Series (STSS) Velocita-USA South region event Fueled by Sunoco. Knowing the show was already postponed until the back-half of the weekend Sunday March 17 with the room already booked we took a long weekend just to get away. Weather was warm and rain free for most of the day but around 7 pm it did start to rain in the area as we were staying in Seaford, Delaware. I felt better knowing the right call was made and saved a lot of folks a lot of unnecessary expense and the promoter doesn’t take a rash of dodo for nothing.

The norm here for me is to not give you the complete race results as I leave that to the high-paid trained professionals doing those press releases. I am going to look at the folks from my area here in the Southern Tier and a few other folks I was impressed with rather from here or somewhere else. I also will write about a few notes I took at the race for Saturday and a couple from Sunday.

The Saturday race was race number one for the 2019-racing-season for Deyo’s STSS South region and also for his promotion at the Georgetown Speedway. It was announced on this day that Mr. Deyo inked the deal to extend his promotion for the next three seasons. Congratulations to you and Heather and thank you from this fan and I am sure many more. Sunday the Georgetown Mayor was on hand and talked about how the track has grown the past couple of seasons under the current promoters. He also discussed how the town was benefiting from it also as another new hotel was being built with other businesses appreciating the influx of folks during race nights at the speedway spending money. The Mayor also talked about his days growing up at the speedway and his short time driving at the track in Lincoln. The cars were simple as you knocked out the windows and have belts put in and race. The Mayor concluded with thanking the fans and the promotional team for all their support.

A big hit on Saturday was special guest at the speedway and he served as Grand Marshall was NASCAR Legend Bobby Allison. Allison spoke about his association with the original builder of the speedway Melvin L. Joseph and many interesting stories about it and telling us all that Melvin Joseph was his hero. Earlier in the day he was signing autographs in the novelty stand and talking to the many folks that went through the line.


The Saturday race was for the Modified division that consisted of big and small-blocks. It was the Melvin L. Joseph Memorial going a distance of 49-laps. The reason for that number of laps was for the number Melvin Joseph raced with on the side of his cars. The first race at the track was held on the same weekend on March 18. On the card with it was a South Series race for the 602 Crate Sportsman division presented by Design for Vision and Sunglasses Central. Payouts also referenced the forty-nine as the ending two digits for the racers. Rounding out the Saturday card was the Vintage cars and as always with racing at Georgetown was the Four Cylinder Cars and also the Four-Cylinder Trucks. Those three divisions ran just a feature on this day. Sunday was the Small block Modified with the Rush Late Model Series. Trucks and Cars rounded out their two-day double-header for these entertaining racers.

I will know give you a run down on how the Southern Tier competitors or affiliation with our drivers fared in the Saturday or Sunday race on racers who ran in the Southern Tier last season. Saturday saw Billy Decker (91) driving the Jeremy Smith owned Modified taking a flip off the backstretch after going over the rear tire of a car slowing with a flat tire. Damage was bad enough that they loaded and went home and not sticking for Sunday. Decker was credited with a 24th place finish as the defending South Series Champion. Decker from nearby Unadilla, N.Y., and drives for owner Smith who raced at Afton Motorsports Park (A.M.P.) and at Thunder Mountain Speedway (T.M.S.) Another A.M.P. Modified competitor was Craig Hanson (20c) who missed by one spot of making the show. The other A.M.P. driver who competed both Saturday and Sunday and had mechanical issues with both cars was Andy Bachetti (4). Saturday Bachetti finished 14th and Sunday unfortunately never took the green. A driver moving up this year who was the Five Mile Point Crate Sportsman Champion raced in both the Modified race Saturday and the small block race on Sunday. I’m speaking of the (84y) of Alex Yankowski who won the Crate race there last season in his first appearance. Saturday a fine 10th place finish and Sunday he came home 7th. Forty-six Modifieds on hand by the way and 53 Crates so a very impressive weekend. Another youngster that caught my eye and was quite impressed with on his first time to the speedway was the (111) of Demetrious Drellos. Drellos runs Lebanon Valley so has big track experience but I was impressed with a 11th Saturday and a fine 8th place finish on Sunday. One last Modified I want to mention even though he failed to qualify was a driver named Todd Neiheiser. I heard the name mentioned and I said to myself I remember that name from the old Flemington Fairgrounds Speedway days. Lucky for me, the very knowledgeable series announcer Jeff Ahlum mentioned this also and it was the same guy. Wow!

Weekend Wrap-Up: Many decisions had to be made during the Modified race by track officials and head honcho Brett Deyo about the tire issue and then the fuel issue. Read about all that in press release. In my opinion even though troublesome on a cold night I feel the right decisions were made. The Modified field was made up of drivers from eight states. N.Y., Pa., NJ, Mass., N.H., Del., MD, and Fla.

Coming up this week the South Series moves to the Port Royal Speedway this Sunday with the card being shared by the Super Late Models. I got my first trip there last year and highly endorse you get there at some point, so put on your bucket list. I wish all a safe race and for those going enjoy. Delores and I will be at the second edition of the Speed Sport Showcase Saturday and Sunday at the Sunshine Plaza right off Route 315 Boulevard in Plains, Pa. It is going to be great, racecars, race tracks schedules, Ms. Motorsports competition, RC racing, trivia, and the big Penn Can Speedway Reunion. Most importantly a general good time. See You There.