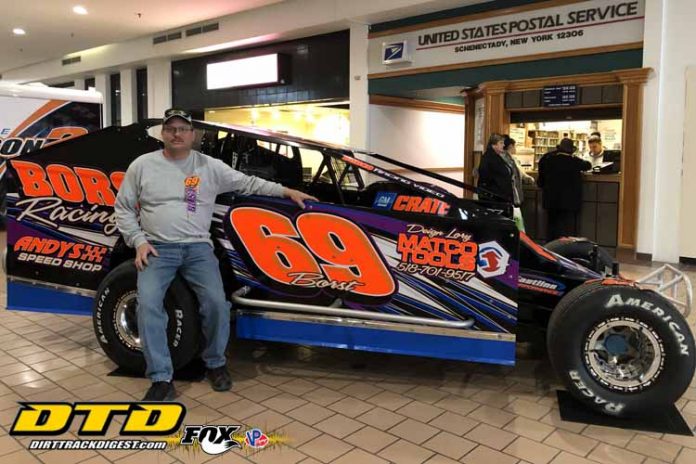 The Northeast Race Car Show at Rotterdam Via Port had plenty of news for the upcoming season. First John Roese of Schoharie will campaign in two divisions this season, he will be a regular in the Pro Stocks at Fonda and will chauffeur a vintage racer replica of his dad, Bill’s racer that the senior Roese drove at Fonda and other Northeast tracks in the 70’s. The vintage alley proved to be one of the most popular with the senior crowd and the MVVDM crew did a great job putting things together for their club. They even peeked the interest of veteran driver, Bob Vedder and we shot this photo when he was with John Roese.

Brian Borst on Schoharie will be back in his No. 69 Sportsman at Fonda this season. Brian said he would like to be able to run a few other shows but with the DIRTcar tracks running Hoosier tires and Fonda on American Racers it’s too costly to obtain for his team. Borst returned to Fonda last season after 15 years out of the sport. He said there were changes that he had to adjust to along with racing with some new, younger racers as well as those he raced with 15 years ago. His 2018 season proved to be a successful comeback, he finished sixth in points and pulled off a win on June 9, 2018. Cliff Haslun of Sloansville will also return to Fonda this season in his familiar No. 13 Street Stock. We’ve heard many say, no one paints their car anymore, it’s all pre-painted panels and vinyl letters. Well Cliff’s car is painted and the graphics are done by Jeff Karabin. Announcers make note; the beautiful blue on Cliff’s Street Stock is New Holland blue. Cliff finished 2018 third in Street Stock points.

Although we still have snow on the ground here many local racers traveled a few hours south this past weekend to race in the Melvin L. Joseph Memorial event at Georgetown Speedway in Delaware and two locals were very successful, Stewart Friesen of Sprakers was the winner of the 49-lap event that was slowed by many cautions. Adam McAuliffe of Broadalbin won the Crate 602 Sportsman event, both drivers were piloting DKM chassis, a big feather in the cap of the fairly new chassis builder out of Fultonville.


So often at many tracks we find it hard to get owners and drivers to give the time to talk when everything is moving so fast. We’ve found that if you can visit with them away from the track they may have more time to spend. We stopped by the Palmer Racing shop on Thursday as they were getting ready for the car show that evening. Both Alton and Carole have become veterans of the sport, Alton behind the wheel and Carole as car owner and they have done so much for local racing and given rides to many drivers, like Jack and Ronnie Johnson, Dave Lape and most recently Bobby Varin. The knowledge Alton has collected over the years is immeasurable and it shows wherever the team goes to race. As we sat in their garage snapping photos of the car that included special graphics honoring family members Ed Keyser and Jackie Varin who are both with the team in memory everyday, we also got to watch veteran graphic artist, Gary Keller as he worked putting vinyl on the panels for another car. Gary has been in the business of painting and lettering race cars for 30 years and he takes much pride in each and every letter and design.

This past week Ed also made a trip to visit Seymour Hayes former Fonda co-promoter with Ralph Compani. Seymour says he still misses hearing Ralph’s voice when he would call him from California as the two would reminisce about times at the “Track of Champions.” Seymour said that when drivers from Fonda traveled to other tracks for big events he and Ralph would always make sure it was as easy as possible for them to represent Fonda. Seymour is dealing with ALS and said “if anyone asks about me, tell them to prayer for me.” Big News came this weekend from Jim Becker of J&J Racing out of Middleburgh that Tim Hartman Jr. will drive for Jim in the STSS North Series races and possibly some other regional specials. The only exception is the opening STSS weekend at Orange County because the team will not quite be ready. Jim made the decision over the winter months, and discussed it with Tim, Jr. in more detail at the Albany-Saratoga Speedway banquet in January. They still have some final things to wrap up but Jim is very confidant Hartman, Jr. will be in the car for these shows. Jim’s crew and Timmy’s Dad and crew will be sharing the crew duties, the two do have some joint modified and sportsman race nights.
Tim, Jr. will be in the Becker 2016 Bicknell, which only has about 12-14 races on it, outfitted with a Precision open small block. They will miss out on the full attendance bonus points on the STSS North because of missing the opener but Jim want to use this year as a learning year and get Timmy on some new tracks, and be prepared for a more concentrated effort in 2020.

Jim is planning to use the teams 2011 Bicknell at the Glen Ridge which also has a Precision small block in it, and the 2016 car when running Afton and any other tracks. Their marketing partners are supporting both efforts with Todd’s Cable Construction signing on for another year of primary sponsorship.

Former racer and long time Lebanon Valley supporter, Sammy Barlow recently had surgery and we send him our prayers. If anyone would like to send him a card send to: 31 New Jersey Ave., Rensselaer, NY 12144.