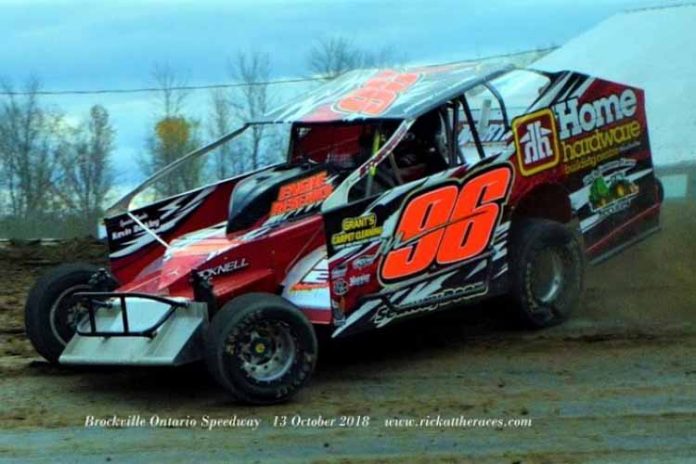 Gary Tomkins spent the 2018 season racing on Friday night’s at the Brewerton Speedway for Tom Corr and Chris Clark. That deal went by the wayside during the off-season forcing Tomkins to begin to look for new opportunities. That search has resulted in a deal to compete weekly in small-block Modified action for Mike and Lori Lasalle at the Can-Am Speedway.

“He hasn’t had a whole bunch of Saturday’s off the last few years,” commented Tomkins about Lasalle.  “He said he liked Can-Am and I love Can-Am. I’ve had some success there before. I’ve won a couple big races. So after talking to the crew we decided we are going to do Can-Am. We’ll do specials only along with that.”

The deal came to fruition after the team hooked up late last season for the Fall Nationals at Brockville Ontario Speedway. Tomkins had a pair of crew guys that helped him on his big-block deal with Darren Kendrick while also working for Lasalle at Brockville. He was able to get behind the wheel of a Lasalle ride and finish sixth in the 110 lap event after starting back in the 24th position. From there their relationship grew during the off-season.

Along with Can-Am the team is interested in specials, with those at the Brockville Ontario Speedway definitely on the schedule. From there they’ll take a wait and see approach in regards to running some of the other DIRTcar 358-Modified Series events in Central New York. Nothing is set in stone as they still have to finalize those details.


“I’m open to doing anything, but we are going to play it by ear,” cited Tomkins. “We all work for a living so they need time to work on the car and get things done. We talked about some of the bigger shows in the area. We’ll finalize those plans a bit later.”

This will be one of the first times in his career that Tomkins has competed regularly in a small-block Modified. Traditionally the Clifton Springs, N.Y., driver likes to run a big-block closer to home at Land of Legends Raceway. He’s also run at the Brewerton Speedway on Friday nights in years past, including last year. Prior to that he had success on the Super DIRTcar Series tour. Unfortunately rides to travel the Northeast have been had to come by in recent years. He’s happy he was able to secure this deal to continue racing weekly as he has no concrete plans for big-block action to this point.

“The fact that I’ve been doing this, well driving big-blocks since 1992, and all these years, except for three years that I owned my own car, I’ve been getting rides,” stated Tomkins. “I feel lucky in that regard.”

Tomkins feels like there won’t be much issue switching from the more powerful big-block to the small-block. He’ll have to change his driving style a bit to adjust to the power difference, but that’s something he thinks shouldn’t be too difficult to accomplish. He felt good in October and expects the same this year.

“I really felt comfortable in the car as soon I got into it,” said Tomkins. “You just got to drive a little bit different. They are easier to drive. You are not overpowered like a big-block is. You can use more of the throttle. I think one thing about small-block more than is a big-block is you got to hustle it more. You got to keep the speed up. You can’t wait on it.”

The regular season kicks-off for the team on Friday, April 26th for the DIRTcar 358-Modifieds at Can-Am Speedway.