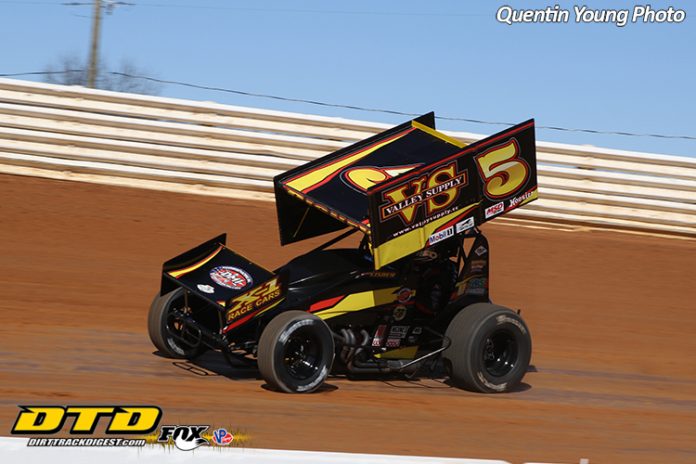 It was Cisney’s first opening day victory at the ‘Speed Palace.’ He’s been on the receiving end of last lap passes in the past and this time it was his turn.

“I’ve lost too many races on last lap passes,” commented Cisney. “It feels good to be on the other side.”

Carl Bowser started from the pole position for the green flag of the 25-lap feature. Bowser battled hard with Anthony Macri on the opening circuit with Macri getting the better of him coming off turn two to take the lead.


Macri opened up the gap on the field leading getting into traffic by lap eight.  He worked his way through without issue.

By the halfway point Macri was in heavy traffic. As Marci worked at the front, Cisney, who started eighth was making his way forward. He got a great run off of the second corner on lap 13 to take over the runner-up position. His sights were now set on Macri.

As the laps clicked off, Cisney started closing on Macri as he was caught in traffic. Macri, who was using the extreme high-side at one end of the speedway and bottom of the track in turns three and four, stayed glued to his lines allowing Cisney to inch closer and closer. Cisney was able to move around the surface allowing him to close the gap as the race reached lap 20.

Cisney closed to within only a few car lengths with two laps to go. Macri was being conservative as he stayed in his trusted lines. That proved to be his downfall as on the final lap a slower car was right in front of him. Cisney got a great run off of turn two to pull within striking distance as they headed down the backstretch.

In the final corner, Macri went to the bottom while Cisney moved up the track to the extreme outside. The pair came off the corner together with Cisney sliding by him for the lead as they came off of turn four. He was able to keep his momentum up to complete the pass to take the checkered flag.

“There was a cushion up top and a groove down on the bottom,” said Cisney. “Man it was just heck of a race. I’m just glad we were able to come out with the win.”

Macri was dejected afterwards with his second place finish as he came up only a few feet short from taking home the victory.

In ULMS Racing Series action for the Late Models their 30-lap feature go got underway with Dylan Yoder and Gene Knaub bringing the field up to speed. Yoder wrestled the lead away from Knaub getting the advantage in the early go.

Yoder set a torrid pace keeping everyone at bay as the action behind him picked up for second with Knaub, Rick Eckert and Covert all in a battle for the position. All the while Yoder continued to lead the field.

The race for second continued as the front runners reached traffic at the midway point of the race. It was all Yoder at the front before Covert was able to get things rolling.

With 10 laps left, Covert was up to second and looking for a way by Yoder. He found his groove on the outside of the speedway rapidly gaining on Yoder.

As the duo raced into turns one and two on lap 29, Covert went to the outside allowing him to go on by Yoder for the lead as he found himself caught behind a slower car.

“I’ve been coming here a long time and I knew that top was there,” stated Covert. “I just didn’t want to show it too early. It actually opened up. It was clean on the bottom, I wouldn’t say it was rubbered. Finally I started getting to him and I knew that top had to be good.”

From there Covert went on to lead the final lap to score the $3,000 feature win. Yoder ended up finishing in the runner-up position.

“Definitely good start to the year, better than last year,” mentioned Yoder. “It is hard to tell in lapped traffic if I should go to the top. It kind of cleaned up on the bottom so I didn’t want to get off of it. I don’t have anybody telling me where to go top or bottom or if anybody was behind me. I tried to run my own race and it just didn’t work out this time.”