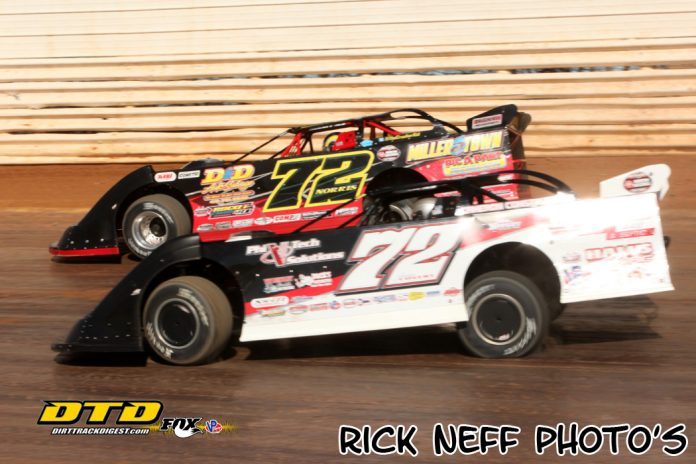 PORT ROYAL, PA – The 2019 Zimmer Service Center United Late Model Series schedule kicked off this past weekend with an anticipated three day weekend that turned into a two day affair at Port Royal after the season opener at Williams Grove was postponed for a week due to cold weather.

Dylan Yoder started on the pole driving into the lead. Max Blair raced into second with a pass of Gene Knaub. The first yellow flew with seven laps in. Yoder controlled the restart as Jason Covert passed Rick Eckert and then Knaub taking over third. Covert went after Blair taking second on lap 12. The yellow flag flew, however, negating that pass.

A wild restart saw Covert, Eckert and Knaub all pass Blair as his car pushed up the track in turns 1 and 2. Yoder maintained control. He led by 1.884 seconds at the half-way point. Defending track champion Jeff Rine pressured Knaub for the fourth spot.

Yoder was working through lapped traffic without much trouble over the final 10 laps. Eckert challenged Covert for the runner-up spot as Yoder led by 1.383 with five laps to go. Yoder was on the bottom, but blocked by slower traffic. Covert went to the middle groove and made it work taking the lead off turn two with less than two laps left.

In Integra Shocks qualifying, Eckert was fastest in Group A with a lap of 20.469 and Hubbard fastest in Group B with a 20.794. Heat races for the 36 cars were won by Eckert, Michael Norris, Hubbard, and Knaub. Mike Lupfer and Alex Ferree won the B-mains.

Dylan Yoder and Austin Hubbard were the front row starters for the30 lap main event. Yoder driving his father’s #27 machine after his primary car engine went sour during time trials captured his heat win from last in a thrilling fashion. But at the start it was Hubbard getting to the front at the start with a fierce battle behind him with Covert, Mason Ziegler, Eckert, Norris, Blair and Gregg Satterlee who all swapped positions multiple times during the event.

Hubbard seemed to be in control of the event for the first two thirds of the race. The first caution flew on lap 16 for Mike Pegher. The very next lap a three car tangle between Mike Wonderling Jr., Donald Lingo and Tim Smith slowed the pace and retighten the field. This gave Norris who seemed to have separated himself from the fierce multi car battle for second and shot at Hubbard on the restart. Hubbard would still hold the lead for a few more laps but the western PA driver Norris was closing in and both drivers charged into turn one with Norris sliding up and squeezing Hubbard to grab the lead on lap 21. With five laps to go, Michael Lake would come to a stop on the backstretch to bring out the final yellow.

The final laps saw Norris hold about 1 second lead over Satterlee who made a late race charge on the top side with Zeigler feeling little pressure from Blair who went from seventh to fourth on the last restart for a career best Port Royal finish and Mike Maresca who started 12th in the field and was not seen the entire race came out of nowhere for fifth at the finish.

The Zimmer Service Center United Late Model Series will be back in action this Friday night at Williams Grove Speedway to make up the postponed event from Friday night. It will be another 30 lap $3000 to win event for the series as it makes it first ever appearance to Williams Grove.