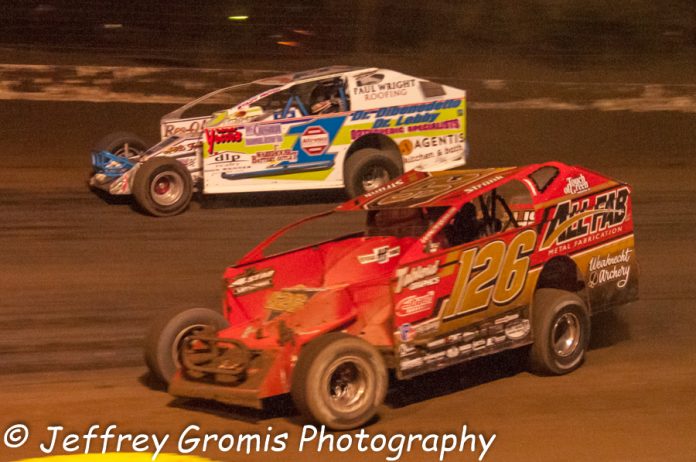 BECHTELSVILLE, PA – Parker Guldin is moving on up. The 22-year-old Fleetwood, PA racer will be racing in the highly competitive NASCAR Sportsman ranks at Grandview Speedway.

After spending his first season of competition racing at South Jersey’s Bridgeport Speedway and winning a couple of features he is ready to take on challenges at his hometown track, something he has always wanted to do.

“I am really excited,” said Guldin who works for one of his sponsors, Deka Battery, as a truck driver.

“We have a 2012 Teo with a crate 602 motor ready to go. We really know what we are doing this season. We have learned from our mistakes.”

The Saturday, March 30th practice session at Grandview Speedway will be his first outing. The crew, which includes his dad, brother Spencer and his sister’s boyfriend Adam, has been putting in a lot of hours to make sure all is ready for the practice and for their season opener on April 6th when the Sportsman are the second part of the VP Racing Fuels Bruce Rogers Money Maker Memorial which will feature the Big Blocks against the Small Blocks with $7,500 going to the winner of the 50-lap main event and $1,000 to take feature green flag.


The Sportsman will race for $750 to win with each feature qualifier getting $125.

Sponsorship for their season will come from Deka Batteries, Penny’s Shear Heaven (his mom’s beauty business), and Schadler’s Garage & Towing along with East Penn Podiatry along with a few others. Mom, Penny, a long time top notch scorer at Grandview in the past, will be the chief cheerleader since Parker has no time for a girlfriend and “does not believe in marriage”.

Parker said, “We want to make our first season racing at Grandview a good one. This is my dream.

The March 30th practice starts at noon and is open free-to-the-public. The sessions always draw a large number of competitors representing a variety of racing divisions.

Practice day is also a great day for fans to come out and pick their seat for the season starting at 10 a.m. or purchase a season ticket for just $350 and pick a seat. The season pass covers all the Saturday events from the start of the season through the Freedom 76 Classic on September 21st.

Teams planning to take part in the VP Racing Fuels Bruce Rogers Money Maker Memorial on April 6th are asked to fill out W-2 forms, available under rules and forms at www.grandviewspeedway.com, in advance. Pit gates open at 2 p.m. on April 6th with a drivers meeting scheduled for 5 p.m. and a drawing for positions at 5:30 p.m.

Those wishing to register for the Rogers Memorial, there is no license required and no entry fee, can do that by telephoning or texting Tina Rogers at 484.256.4375. Please include name and contact information. All info can be found on the track website. An early entry could very well gain exposure for the team and their sponsors.

For the second year in a row adult admission will be $28 while youngsters 6 through 11 pay just $5. Kids under six are admitted FREE. Pit fee is $35. The rain date is set for Saturday, April 13th.

MEDIA NOTE: If you are planning to cover the Rogers Memorial on April 6th and do not hold a season media credential please be in touch so that arrangements can be made. Thank you. Ernie Saxton at esaxton144@aol.com or telephone 267.934.7286.