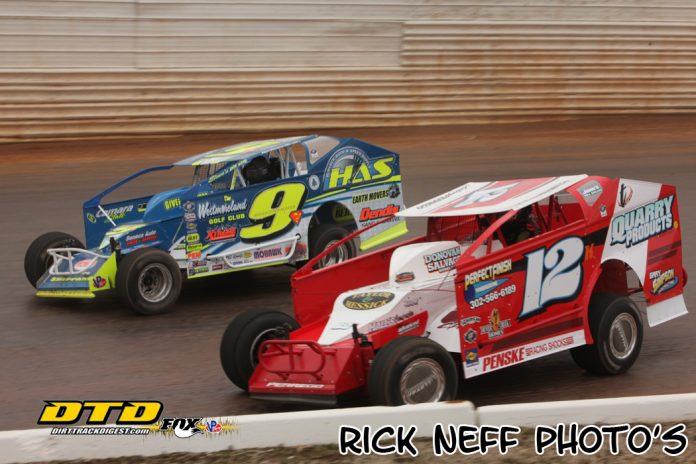 The inaugural Short Track Super Series race last season at Port Royal Speedway was certainly a barn-burner and a race that would certainly be hard to top. But, top it they did on Sunday. Anthony Perrego and Matt Sheppard put on a duel that will be talked about for years as the two star Modified drivers swapped the lead back and forth numerous times all the while why racing through lapped traffic. Neither driver gave an inch as they both zigged and zagged across the racing surface putting on a show for the fans.

When it was all said and done with the checkered flag waving it was Perrego taking the win by a few car-lengths over Sheppard. For the Montgomery, N.Y., driver it was his first win of season and his first win in the Gary Simpson No. 12K in only their third race together.

“Matt’s at the top of the class in the Modifieds,” said an elated Perrego while discussing their battle for the win. “I’ve been watching Matt since I was a kid and to race with him now is pretty awesome. He’s been dominate in our sport and it feels good to be able to beat him. It was crazy battling Matt there. I got by him the one time then I got too high and he got me back. We were going at it then the lapped traffic kind of slowed him up and I think he wanted to work the middle but there was just not that much there. I tried a couple of times to get by in one and two and he slipped up and I got by him then I did the same thing back in three and four.  I got up and out of my lane and he was able to sneak back under me.”

Both Sheppard and Perrego kept swapping the lead until Perrego finally made the winning pass coming through turns three and four that secured the lead for good. Perrego used a little muscle to get by Sheppard, but it was a move both drivers would’ve made if put in the same position.


“We both got down into three and he wanted to be on the bottom, he didn’t know how close I was,” described Perrgo. “He (Sheppard) got a really good run off of two and I think he just thought he was going to be clear going into three, but the traffic kind of bottled him up and I was able to keep my momentum going.  I was able to diamond it off coming off the turn to make the pass.”

It was a big redemption for Perrego and the Simpson Racing team at Port Royal. Last October at Port Royal was the first time the two parties had ever raced together and to say the debut was a bad one is an understatement. The team was forced to load up after warm-ups and leave after problems developed on the car.

“Last year we pretty much packed the track then loaded up and went home,” explained Perrego. “The water pump shaft snapped in half on this motor here. We were here for maybe fifteen minutes then loaded up and left. It was a real heartbreaker for these guys.  It was the first time the car was out, but we’ve been rolling so far this year, so it’s been good.”

Perrego went on to talk about how he got together with Gary Simpson and what it means to have another team that he can depend on and take some of the load off him while he works on his other cars.

“Gary and his team are great people to work with,” stated Perrego. “Last October I met him over the phone actually and the first time we met face to face was here last October. They have great people working on the car and I am sure this win means the world to them. It helps that I don’t have to maintain this car, but last week we boned her up pretty good so it’s been at the TEO shop all week.  I put three days in it getting her all fixed up and my motor guy’s been working on it all week just fine tuning a couple things to get it right. Matt Hearn found something to help us out and it’s just a privilege to drive these cars.”

The name Matt Sheppard is synonymous to winning in the world of Northeast Dirt Modifieds in recent years so after finishing second once again in yesterday’s STSS race at Port Royal Speedway you might think that the driver out of Waterloo, N.Y., would be a little disappointed in the race’s outcome and you would be right. When Matt Sheppard straps himself into a race car winning is the only outcome he will deem acceptable. But as disappointed as Sheppard was after yesterday’s STSS race he was also very excited to race at the legendary Central Pennsylvania speedway for the first time.

Even before the race started Sheppard knew the fans were in for something special.  While being interviewed after drawing for his starting spot Sheppard predicted that the fans were going to be in for a show come feature time.

Sheppard and winner Perrego gave the fans a show and when it was all said and done Sheppard could only guess what could’ve have been.

“If I could’ve got by the No. 19 a little sooner that might’ve helped,” said Sheppard  as he described his battle with Perrego. “I think if I had some open race track I would’ve been alright as I could have moved around a little, but you never know.”

As always,s I can reached at dirtracefan25@hotmail.com or on Twitter @dirtracefan25 for any questions or comments.