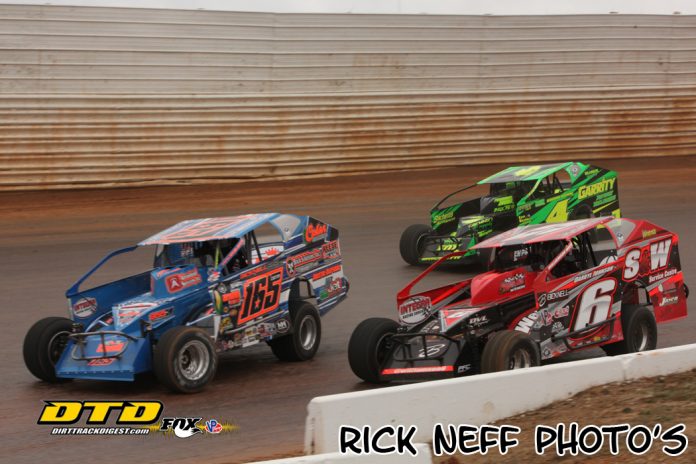 Mat Williamson made his first ever trek to Port Royal Speedway on Sunday afternoon and the Canadian driver made the most of it. Williamson came from the 19th starting position to secure the final spot on the podium. The third place finish was a much needed pick me up for Williamson after some early season struggles in Florida back in February.

“It’s a nice way to rebound after Florida,” said Williamson. “This is what we wanted to do. We wanted to try and clear our heads from Florida to see if I can still drive a race-car. It was tough there. We were contemplating a lot of things and it’s nice to figure it out and get a good run. It gives you confidence. It’s great to go to Florida and race, but when you don’t do well it gives you two months to sit on it. This deal is here, it’s good that we came.”

The 40-lap race featured just one caution for a slowing Stewart Friesen in the early go. That allowed Williamson to gain a couple of positions to get into the top five with just 15 laps in the record books. He then had to try and track down eventual winner Anthony Perrego and second place finisher Matt Sheppard. He got close to Sheppard’s bumper as the checkered flag flew.

“The one caution we got was beneficial,” commented Williamson. “We passed a couple cars and that probably put us to third. Then I needed one more caution or a couple breaks from lapped cars. They weren’t giving me any breaks but they weren’t giving Anthony or Matt any breaks either. It was kind of even there. Everyone got a fair shake. Unfortunately we ran out of laps.”

If there was anyone that needed a good run on Sunday afternoon it was Danny Bouc. Bouc exploded a motor on opening day at the Georgetown Speedway in hot laps ending things before they could get going. He bounced back on Sunday with a solid fourth place finish with the Craig and Lesley Pondish owned No. 6.

“This is awesome,” stated Bouc. “This is what it should have been last weekend. You have part failures, that’s racing. It is nothing with their equipment, their equipment is great. This was what we needed. I almost needed a win this weekend after how hard I worked, but this is good. It is the highs and lows of racing. This is good for them. They spent a lot of money this winter to go out and have a part failure like that was very discouraging. This is definitely better. I think from here on out, if everything stays together, we’ll be in good shape.”

As a result of the prior week’s engine failure, Bouc was driving a different motor combination in his No. 6 Bicknell. He usually does like to use it on a slippery track, but on Sunday it was enough to keep him up front after starting second.

“This motor is really hard to drive on a slippery track because it likes a lot of RPM’s,” mentioned Bouc. “The car is a Bicknell. It was really good. I’m very happy with this car. I think this car helps this style motor out. I think it’s going to be good from here on out once we get on some small tracks. I’m looking forward to the Money in the Mountains at Big Diamond, we may take it to New Egypt and see how it goes compared to my spec engine car. I’m looking forward to racing it.”

Hearn Has Success on Racers

Brett Hearn completed Sunday’s top five with his Teo Pro Car No. 20. It was the first time Hearn had ever laid eyes on the Port Royal Speedway. It was also a rare opportunity for Hearn to bolt on American Racer Tires. That is something he’s struggled with in the past, but not Sunday as he ended up fifth.

“It’s not in my setup chart,” said Hearn when asked about the struggles changing tire manufacturers.  “It’s a little bit different feel. It’s not ridiculously different.  Especially with the softer versions of the tires we are figuring out what we need to be fast.”

Hearn didn’t have anything for the top two of Perrego and Sheppard, but he held his own as he battled with Bouc and others throughout the feature. He was just missing a little bit extra.

“There were a couple really fast cars out there with Anthony and Matt, but a couple guys broke down and that changed the complexion of the race. We hung there near the front. We were just off a little bit.”

Billy Van Pelt lost a motor in his heat race ending his day. He indicated that the motor sustained significant damage…

Erick Rudolph’s day was done before it got going. The Ransomville, N.Y., driver barely turned a lap in hot laps when he pulled into the infield. Once getting back to the pits the team loaded up and headed out before racing action got underway…

Rex King Jr., made his first ever Short Track Super Series feature on Sunday. He indicated it was his first time at Port Royal and his first time on American Racers. He was happy to come home in 19th. The defending BRP Modified Tour champion plans to hit more events with the STSS this season as he branches out with his racing program…

Stewart Friesen slowed while leading with a power-steering issue. The team attempted to make repairs before sending him back out on the track. Friesen struggled in the main-event as they weren’t able to get enough fluid back in it before the race went back to green.