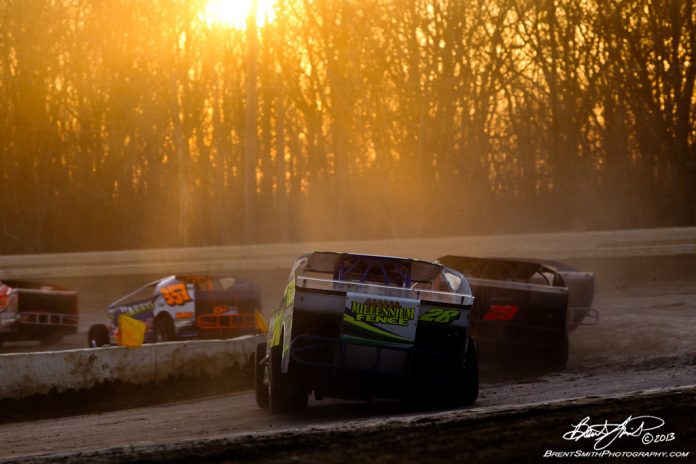 BRIDGEPORT, NJ – The Bridgeport Speedway will again honor Doug Hoffman when the track opens its gates for the first race of the 2019 season on Saturday, March 30th with the seventh running of the 60 Over Special – Doug Hoffman Memorial Race.

The Bridgeport Speedway was an integral part of Doug Hoffman’s racing career which oddly enough, began on the 1/5th mile asphalt track of the Dorney Park Speedway in Allentown, PA in 1977. Dorney Park was just minutes away from the Hoffman family farm. It was Doug and older brother, Michael who made the first in roads in racing in the Hoffman family as they got together with some of their buddies and set about putting a race car together for Saturday night competition. Doug was designated as the driver of the car whose No. 60 was drawn out of a hat that held each crew member’s favorite number.

Michael and Doug’s plans to go racing did not receive a warm welcome from their dad who reluctantly allowed them to keep the car in an old chicken coop on the farm. But, when the elder Hoffman saw that this race car kept his sons’ interest and had them at home working on the car every night, he decided maybe this wasn’t such a bad idea after all.

It wasn’t long before Doug started to win races. In just his third season of competition, Doug won the Dorney Park track championship. The Hoffmans decided to move their racing onto the area dirt tracks the following year.

Hoffman’s first dirt car was a former Frank Cozze Olsen chassis. A trip to Olsen’s shop resulted in a long list of items that was needed for the race car. That list was posted on the Hoffman family refrigerator – just like a Christmas list – where family and friends could select what piece they would purchase.


Doug’s early dirt car racing wasn’t very successful. After several wrecks, it was Budd Olsen who convinced Hoffman to come to Bridgeport. Olsen maintained that it was good track to learn on. Bridgeport’s 5/8th mile track was big and wide and gave a driver plenty of room to race. And as they say – the rest is history. By 1982, Hoffman’s career was really taking off. Hoffman was winning races and attracting sponsors to support his racing efforts.

Doug Hoffman earned 482 victories during his career while racing at around forty tracks in nine different states and two Canadian provinces. Twenty-five times he was a track or series champion. Hoffman won four Bridgeport titles and collected ninety-two Bridgeport feature wins – second only to Jimmy Horton.

It was at Doug’s urging that led Keith from behind the scenes to behind the wheel, taking a second car out on a few occasions and then competing with the Rookies at Flemington during the 1990 season.

When both Doug and Keith were racing, they tried not to race against each other – at least not on a regular basis.

In 2001, Doug was the track champion at both East Windsor and Bridgeport. Keith won the track titles at both Big Diamond and New Egypt.

Doug Hoffman had a second racing career as a promoter. He took on the challenges of the Bridgeport Speedway for the 2012 season and breathed life back into the Logan Township racing facility. The Poker Series was started by Hoffman during his years promoting the Mahoning Valley Speedway. He introduced the Poker Series at Bridgeport and it was well received. 2019 will mark the eighth year of Bridgeport’s Poker Series with Hoffman’s Memorial Race being the first hand in the 2019 series.

The 60 Over – Doug Hoffman Memorial Race always attracts a stout field of cars to the Bridgeport opener.
To date, Ryan Watt is the only driver who has repeated in this event. Bobby Varin picked up the win in 2013 in the Atlas Trucking No. 66. Watt’s first win came one year later with Ryan Godown picking up the win in 2015 behind the wheel of Bill Hewlett’s No. 901. Dominick Buffalino put Pat Michael’s No. 51M in the Winner’s Circle in 2016 while Stewart Friesen collected the victory one year later. Watt’s second 60 Over victory came last season.

Pit gates will open at noon on Saturday with the grandstand gates opening at 2pm. Warm-ups will begin at 3 with racing getting underway at 4pm. Grandstand admission will be $25 with children ages 10-15 at $10. Children under ten years of age are admitted free. Admission to the pits will be $35,

Come early and take advantage of all that the Bridgeport Speedway has to offer. Free musical entertainment. Ride the Bandit Bus to get a look behind the scenes as you ride through the pit area. Enjoy the many delectable delights that the refreshment stands have to offer. And don’t forget to pick up the latest in Bridgeport Speedway swag – new shirts will be available for the season opener. You will want to add a copy of the official Bridgeport Speedway program – the Bridgeport Bullet – a welcome addition to any race fan’s collection.

We are Bridgeport – the only track in New Jersey to offer Big Block Modifieds; we are committed to maintaininga safe, fun, family atmosphere creating life-lasting memories of excitement.