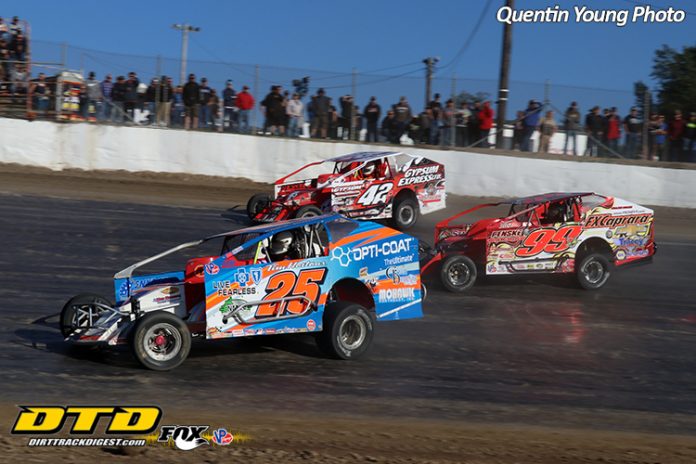 CONCORD, NC — Fulton Speedway is not an easy bronco to bust. Just ask any of the Super DIRTcar Series stars about its imposing high banks and tight quarters. It takes nerves of steel to muscle a Big-Block Modified around Fulton for 100 laps.

This year, on Saturday, April 27, the High Bank Holdup 100 pays $7,500-to-win. The best Big-Block Modified drivers of the northeast will converge on the town of Fulton, NY, but only one will walk out with the loot.

It will take 100 laps to separate the proven veterans, Super Matt Sheppard, Lightning Larry Wight, and The Baldwinsville Bandit Jimmy Phelps from the young guns like Anthony Perrego, Jack Lehner and Demetrios Drellos.

They’ll all need to contend with 2018 Super DIRTcar Series runner-up Erick Rudolph, pilot of the No. 25r. Rudolph is eager for the reason to get rolling.

“I enjoy racing at Fulton Speedway. I always make it over for the 200, and we’ve had some success in that. We got second place this past season so, we’ve got a pretty good handle on the track,” said Rudolph, with confidence.


Billy Decker, in the Gypsum Racing No. 91, is eager to return to Fulton Speedway as he has won the past three Super DIRTcar Series races there. He leads all drivers in wins with four.
2018’s High Bank Holdup 100 was rained out, so race fans may have missed the impressive capital improvements to the facility.

He also noted, “Camping is free for the weekend. It’s a great two-day show to get the camper out for the first time this season. Friday night includes the DIRTcar Sportsman Modified Series and the Empire Super Sprints. Then we come right back on Saturday with the Super DIRTcar Series Big-Blocks, our weekly DIRTcar Sportsman, and Late Models.”

There is a buzz around the Super DIRTcar Series Championship story for 2019. Rudolph showed that he has the speed and consistency to get the job done, but Sheppard is heading into the point-paying portion of the season with a lot of momentum. However, Wight is poised to continue his NAPA Super DIRT Week Championship speed right into 2019. It’s anyone’s guess.

“The mix between the local scene and the very strong list of Platinum Drivers ensures that we are going to have a great field,” Reed said. “The car counts have always been strong since the inaugural High Bank Holdup 100.” And if that isn’t enough to get you out to Fulton, Cor reminds us, “Our pizza is second to none. And Hoffman Hot Dogs never disappoint either!”

The High Bank Holdup 100 is a part of a two-day event at Fulton Speedway. Friday night features the High Bank Holdup 50, which is the DIRTcar Sportsman Modified Series opener. Plus the Empire Super Sprints and open DIRTcar Big-Block Modified practice.