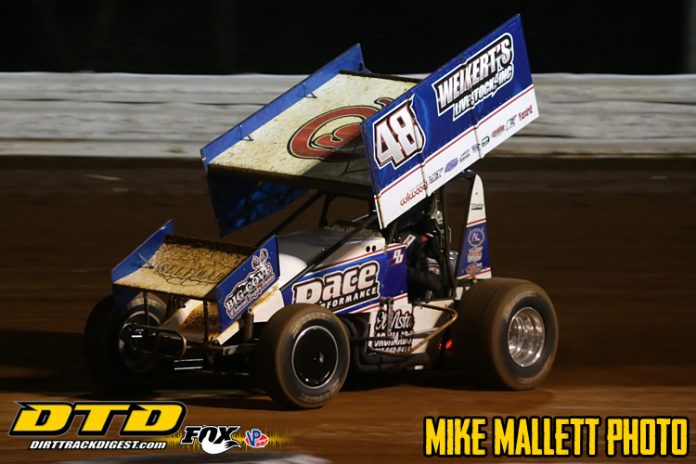 Confidence is everything in racing and right now Danny Dietrich is riding a wave of positivity to continue to his strong start to the 2019 season. The Gettysburg, Pa., driver amassed his second win of the season, his first at Williams Grove Speedway, and the 20th of his career on Friday night. It was a dominating triumph as he won by 4.677 seconds.

“This is huge,” stated Dietrich. “This is the first one here. Hopefully we get a few more here before the year is over.”

Dietrich started on the pole for the feature. As the field came to green Brock Zearfoss lined up next to him. That would be the closest anyone would be to him for the entirety of the 25-lap feature.

“I think it was pretty important, but that is the best I’ve felt here in a long time,” commented Dietrich when asked about starting on the pole. “I didn’t have any trouble with lapped cars. I could really go anywhere on the track. It is hard to say, obviously it’s good to start up front. I think we could have started a little deeper and definitely gave them a run for their money.”


Unlike most of his competitors, Dietrich was able to roll his Gary Kauffman Racing No. 48 on the cushion. His car didn’t bobble or bounce when it got into the curb.

“We’ve tried a couple of different things,” he said about his setup. “This is way different than what we did opening day here. We are pretty pleased with what we are trying to get accomplished with a couple different race surfaces here. We got a good foundation for here when the track is like this.  We just have to make the right adjustments here moving forward the rest of the year.”

The only scare for Dietrich came on the closing lap as Dylan Cisney got shoved off the cushion right in front of Dietrich nearly collecting him. He handled it perfectly.

“He hit the curb and it drove him down off of it,” cited Dietrich. “I wasn’t expecting him to come down that low. One way or another I was getting to that flagstand before they even had a chance to throw a yellow. It’s never hairy, it’s just part of being the leader. You got to pick and choose your lanes and make sure you choose the right one.”

Buckwalter Back on Track

Steve Buckwalter had motor woes on opening day at Williams Grove Speedway, but that was no concern on Friday evening as Buckwalter finished in the second spot behind Dietrich. Buckwalter’s car at times was simply evil in the main-event. It would hit the cushion and bounce or pull the wheels off the ground on restarts, but he was able to hold his own to get it to the checkered flag.

“Last week at Port (Royal) the track was so slick and we had the car freer for the end of the year last year for the (World of) Outlaws because it was cold and the track was heavy,” commented Buckwalter. “We kept it like that to start this year and I was spinning tires and sliding around. Over the week we changed it back to what we normally run for a slick track and then we show up and it’s heavy. We are just always that one step behind.”

Even with the handling woes, Buckwalter felt like his car was good enough to compete, especially in dirty air.

“I felt good,” he said. “I needed to get on the cushion a little better but I was just too tight. We’ll just have to work on it a little better. The dirty air upsets the car, but it doesn’t seem to bother me much. I kind of like that because I feel like I can make up some ground. I was never close enough to do anything, Dietrich just took off.”

Macri Makes the Most of Night

Anthony Macri kept things heading in a positive direction at Williams Grove. Macri struggled with a poor pill draw which put him behind for much of the night. He started 22nd in the main-event before managing an eighth place finish.

“With the track that narrow our original plan was to just take a couple of laps and pull in,” commented Macri. “We were up to 11th by lap four so we decided to stay out. We got things rolling so far this year so I’m happy.”

Macri’s start to the season has been the best of his young career. He’s got a pair of heartbreaking second place finishes, including one last Saturday at Port Royal where he lost the race in the final turn. Even with all that being the case, his confidence is still riding high.

“I’ve never been this confident this early in the year so that feels good,” stated Macri. “We really stepped back and did our homework this winter. This is the most prepared we’ve ever been. We got good cars, the motor program and we’ve been working on our shock program. Everything is falling into place.”

Kasey Kahne flipped early in the feature event in turn four. Kahne bounced off the inside wall which shot him across the track into the outside wall. He took a wild series of flips before coming to a rest on the frontstretch. He walked to the ambulance…

Robbie Kendall experienced motor issues causing him to start and park the main-event.