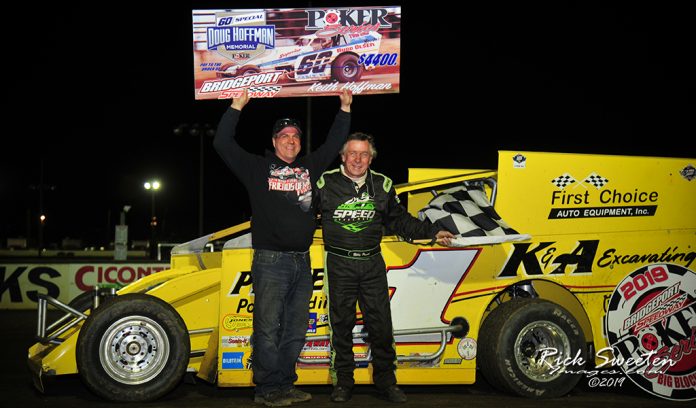 BRIDGEPORT, NJ – What a great way to open the 2019 Bridgeport Speedway season!! The weather was great – warm and sunny – on the last Saturday of March. There were a lot of fans, a lot of race cars and a lot of great racing throughout the 60 Over – Doug Hoffman Memorial Race. It was an event that Hoffman would have been proud of!

At the end of forty-four laps, it was Billy Pauch who dominated the field to pick up his first win of the season in the Spirit Auto Center sponsored Modifieds.

A day race in late March said dry, slick track to Pauch who came to race with his K&A Excavating sponsored No. 1 Small Block Modified. Davey Sammons took the lead from polesitter, Matt Stangle on the start and led the first nine times around before Pauch challenged as the leaders raced to the line for lap ten.

Pauch won the spot and never looked back. He had nearly a straight away lead on the field when Rick Laubach came to a stop on the homestretch with thirty-five laps on the books. Two restarts later, it was still Pauch way out in front to take the win over Sammons who had his best Bridgeport outing to date. Jimmy Horton, Bridgeport’s All Time Feature Win Leader, finished a strong third followed by Craig VonDohren and Duane Howard.

Steve Kemery picked up where he left off at the end of the 2018 season by taking the win in the South Jersey Overhead Door 602 Crate Sportsman feature. The win was Kemery’s third win in his last four races at Bridgeport.

Kemery raced to the inside of leader, Steve Davis on lap nine to take the lead after several challenges on the outside did not move Kemery into the lead. Craig Whitmoyer raced from his seventh place start to finish second. 2017 DA’s Auto Body & Repair Rookie Champion, Jim Gallagher raced home in third followed by Davis and Eric Kormann who was behind the wheel of a Jeff Brown owned No. 9.

Rich Stinson, Jr. repeated his opening day performance of a year ago to pick up the first win in the Sunbelt Rentals Outlaw Stocks. Lee Allen led the first two laps before Tom Wills, Jr. raced to the outside to take the lead on lap three. One lap later, Wills slowed and headed to the pits with mechanical ills as Stinson took over the lead and led the way to the checkered flag at the end of fifteen laps. Jon Meyer won a hard fought battle with Brian Ludwig to take second. Ludwig took third followed by Allen and Gary Klimeczak at the finish.

Pauch, Kemery and Stinson each earned a Ace for the first hand in the 2019 Poker Series. Drivers finishing first through thirteenth receive a playing card from an Ace through a deuce for this year’s series.