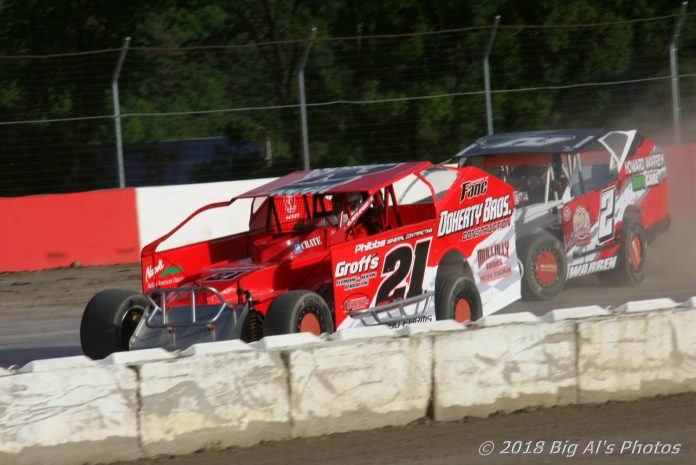 Hazer created the KOD tour in 2015 to elevate teams in the Sportsman Modified division with a professional, affordable, and uncommonly competitive set of special events. The cars, which utilize the popular and economical General Motors “602” crate engine, typically play a support role for Big Block and Small Block “358” Modifieds at weekly tracks in New York State but have taken hold as the headliner in Vermont and New Hampshire.

Under the direction of Mike Bruno, the King of Dirt Racing Crate Modified Series will continue to operate in 2019 with a six-race championship, along with single special events for 358 Modifieds and Pro Stocks; the same schedule that was previously announced by Hazer will remain in place.

Bruno was approached by Hazer in early March and the deal came together quickly. Hazer chose Bruno specifically because of his commitment to the Sportsman Modified division and the GM 602 crate package; Bruno has promoted Sportsman cars as the weekly headline class at Devil’s Bowl Speedway in West Haven, Vt., since 2012.

“I’m honored that Rob Hazer asked me to take the reins, and I sincerely appreciate his confidence and his friendship,” Bruno said. “He built the King of Dirt Racing Series and I hope to carry his vision forward, but I’m also excited to take it to the next level. The KOD events at Devil’s Bowl have been great, and our fans and officials have already gotten to know many of the drivers and teams. I’m confident that we’ll give KOD a good home, and I know that we’re all looking forward to growing the series in the future.”


Hazer cited a need to concentrate on a series of recent health issues as his motivation to transfer ownership. Bruno, in turn, has asked Hazer to stay on the KOD team in an advisory role. Hazer will continue to provide media and marketing support for KOD events, along with occasional race-day duties.

“King of Dirt Racing is a viable and recognizable brand,” Hazer said. “The series will be in good hands with Mike Bruno at the helm. His group is a cohesive unit, and when you combine that with KOD’s strong team of people, the sky is the limit. I have to focus on my health, but I will remain involved and I truly appreciate Mike being so adamant that I stay on board. I’ll be more in the background, but racers can still contact me with questions if they want to. I can’t thank everyone who has been involved since the beginning enough, and I’m confident that Mike will take KOD into a positive and bright future.”

KOD has crowned a Crate Modified champion each year since 2015 and will do so again in 2019. Connor Cleveland and Rocky Warner have each earned two KOD Crate Modified championships, and Warner leads all drivers with 10 KOD wins. Full-fender Pro Stocks were a KOD championship division in 2015-18 as were 358 Modifieds in 2017-18, but both have been scaled back to single special events in 2019.

Devil’s Bowl hosts the “Leon Gonyo Memorial 40” on Sunday, August 11, followed by the prestigious “Mr. Crate Track USA” 30-lapper at Lebanon Valley (N.Y.) Speedway on Saturday, August 31. The KOD champion will be crowned on Friday, September 6 in the “Northeast Crate Nationals 100” at Albany-Saratoga.

Three of the six KOD Crate Modified Series races will run in conjunction with major Modified events; the KOD races at Airborne and Lebanon Valley both complement the Super DIRTcar Series, while the August 11 race at Devil’s Bowl is held in conjunction with the inaugural “Battle at the Bowl” Big Block/Small Block Challenge event.