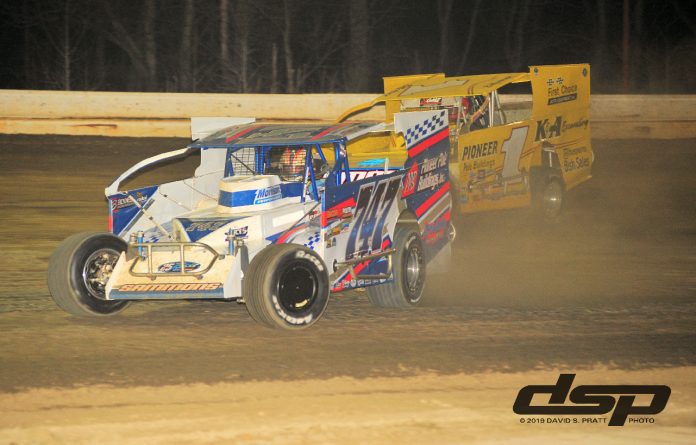 There are a lot of choices that need to be made in order for a driver to be successful at the race track. Some of those decisions are made after the team arrives at the track while others are made before even leaving the garage. That was the case on Saturday night at the Bridgeport Speedway in the 60 Over Special Doug Hoffman Memorial.

Billy Pauch made the right call when the team loaded the trailer Saturday morning to run an open small-block rather than a big-block or any other combination. That choice helped propel him later in the evening to a feature win.

“It’s about getting the right combination,” stated Pauch after his dominating triumph. “I looked at the weather today. It was going to be 70 degrees and with the wind blowing. I knew the track was going to be dried out. A spec (small-block engine) finished second. He (Davey Sammons) was pretty damn good. I had to race him to get it.”

The race between Pauch, who started seventh, and Sammons who started on the front row was a good one. Pauch worked him over until finally making the pass for the lead on lap 11 on the outside of turns one and two. Once taking the advantage Pauch quickly got back to the bottom of the speedway and checked out.


“I didn’t want to be out there the whole race and use up my tires,” stated Pauch about the high-side. “This place is brutal on tires. You can see my right rear looks a little worn out. I figured I could get him there and once I got him move back down to save the tires. There was a top there. I was just worried someone was coming. I kept looking at the lap board to see who was there.”

Fortunately for Pauch no one was there to gain on him. He was dominate during green flag runs. His only struggles during the day came on restarts. He battled a very tight race car which came as a result of having the sail panels on the car. The team hasn’t had the chance to run them often, especially at Bridgeport.

“I had a real tight car on starts,” mentioned Pauch. “I’d take off and have to burp it to turn. I was a little nervous that I might lose it on a restart because the car was so tight I was slow.”

It’s Pauch’s first win of the season in only a handful of starts. It’s a great way to get things rolling as the season picks up steam in the coming weeks.

“It’s big when you win early,” he said. “You want precedence, to get your sponsors happy, the crew pumped up and hopefully get some momentum.”

He definitely has some momentum as he looks ahead to next week’s season opener at the Grandview Speedway.

Davey Sammons had no plans to run Saturday night’s race at the Bridgeport Speedway. The original agenda for the day was to run practice at New Egypt Speedway for next week’s season opener. The decision was made after a few text messages in the morning to the team. The late choice definitely paid off as he drove his spec small-block to a solid second place finish.

“It’s feels great,” he said. “I understand how to race here, especially with the spec motor. The 360’s (Sprint Car) race a lot like that. I understand where I need to put the car in certain situations and when I can go to the outside. Hopefully I can carry this momentum into New Egypt.”

Sammons and the team made several changes over the off-season. The team made changes on the car to go along with some weight loss for himself. Those changes worked well Saturday.

“I took about 10 to 15 pounds off myself and the car is about 60 to 70 pounds lighter right now,” mentioned Sammons. “We’ve done our homework. We’ve changed some things here and there and I think we are going to have a good year.”

Sammons kept Pauch at bay as long as he could, but the difference in power between the open and spec motor played a role. Pauch was able to get up on the cushion and motor by him. Sammons wasn’t sure if that was the line he needed to run as he hadn’t been challenged on the top to that point.

“He passed me on the top I believe,” commented Sammons. “That is the difference between a spec motor and an open small-block. Obviously the sail panels were a major advantage and he had more power and it’s Billy. He knew what to do. I was never able to run the top in one and two like he was able to do. I could do it in three and four if I needed to. I could see the track was changing and getting shiny but as the leader it is hard to make that change. I could see it was building a curb in one and two which meant there was people out there.  To that point I hadn’t heard or seen anybody.”

Sammons was most happy to get a good run for car owner John Chemidlin who is celebrating 55 years in racing this season. He wasn’t at the track on Saturday as he’s in Florida dealing with some health issues.

“This is good for everybody on the team,” stated Sammons. “John is down in Florida. Hopefully we can keep this going for him.”