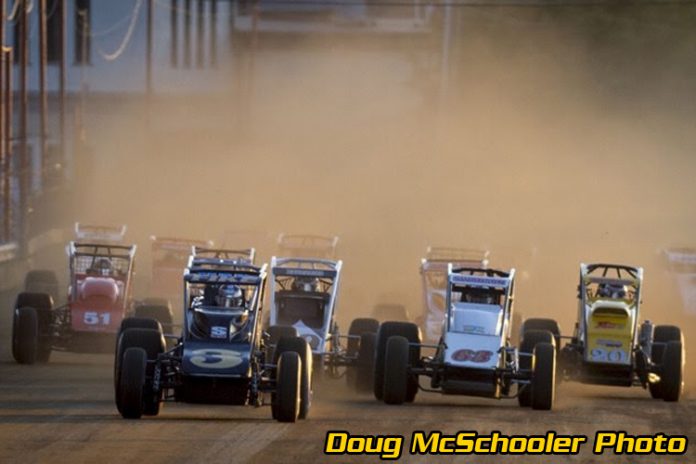 The ultimate impact is that the conversion of the surface means that auto racing events will no longer be held on the famed one-mile track following the 2019 Hoosier Hundred. The 64th running of the 100-mile, 100-lap race, scheduled for Thursday, May 23, will be the last running of this grand racing event at the Indiana State Fairgrounds.

“USAC, Track Enterprises, Bob Sargent and I have been in meetings with the Fairgrounds staff and in discussion for the last two years about any way to keep auto racing at the historic one-mile oval,” USAC Series Coordinator Levi Jones explained. “To no avail, the economics of the horse industry and their desire to use the one-mile track year-round instead of the half-mile currently in the infield won out in the end.”

USAC and Track Enterprises are currently exploring possible venues that could host the Hoosier Hundred for the 2020 season and beyond.

The history of the Track of Champions dates back well over a century. On June 20, 1903, Barney Oldfield drove a Henry Ford-designed “999” to the first sub-one-minute lap ever on a one-mile racetrack at 59.6 seconds. In 1917, Oldfield, the 1905 AAA National Champion, prevailed in a match race versus 1915 Indianapolis 500 winner Ralph DePalma.

In 1946, under the AAA National Championship banner, the one and only “Indianapolis 100” was held, with Rex Mays taking the victory. Seven years later, in 1953, a new, long-lasting tradition began with the inaugural running of the “Hoosier Hundred” won by Bob Sweikert.

The Hoosier Hundred has been held annually since 1953, with only a handful of interruptions due to inclement weather. Today, it remains one of the oldest, most tradition-rich racing events on the planet. Many of its winners have gone to achieve legendary status in auto racing with a list that includes A.J. Foyt and Mario Andretti who are among the seven drivers to have won both the Hoosier Hundred and the Indianapolis 500 in their careers along with Bob Sweikert, Jimmy Bryan, Rodger Ward, Parnelli Jones and Al Unser.

Over the years, the Indy Mile has been home to a myriad of USAC racing events, including Sprint Car, Midget and Stock Car races. In the early-1980s, the “Hulman Hundred” for Silver Crown cars was created, which was added to the schedule as a second annual race for the series at the track each year from 1981-1995.

On Thursday, May 23, be a part of history and witness this great race. “Hoosier Hundred” pit gates will open at noon Eastern, with the Hoosier Lottery Grandstand opening at 3pm and practice at 5. Racing begins for the Modifieds at 6 with Silver Crown Qualifying races to follow and the “Hoosier 100” scheduled for an 8 o’clock green flag.

Reserved seating is available for the Hoosier Hundred by calling the Track Enterprises office at (217) 764-3200, the Indiana State Fairgrounds Box Office, or through Ticketmaster. Reserved seats for adults are being sold for $25 pre-sale or $30 at the gate. Infield tickets will be available for $15 for adults and $5 for kids 11 and under.