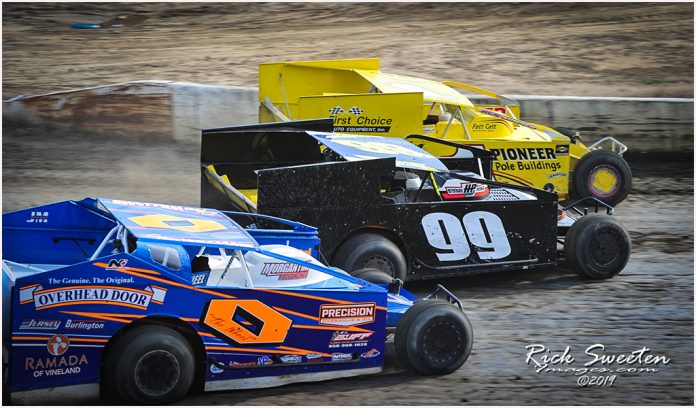 BRIDGEPORT, NJ – Bridgeport has adjusted their newly revamped headline division rules effective immediately. The ‘open’ 358 small blocks, who were given the opportunity to run sail panels over the winter, will now run standard ‘window’ body rules. All of the other rule changes in regards to the ‘open’ 358s, spec 358s, and Big Blocks will stay in place and closely monitored in the future races.

“Our main objective was to slow the Big Blocks down a bit with cost of engines, tires, ect and I think we’ve accomplished that goal,” offered track owner Brian Ramey. “However, after Saturday’s event and dozens of phone calls with concern of equality, it seems that we gave a little too much advantage to the ‘open’ small blocks. We are a Big Block track, that is just trying to open the door for some teams to come that may not have a Big Block yet still be competitive,” Ramey added.

Another rule has been adjusted that can be found in the ‘track rules’. There was an incident regarding lapped cars on a restart towards the end of the race. “We followed the rulebook on this one I can guarantee you,” Ramey pointed out. The previous rule had all lapped cars remaining in place until 5 laps or less to go. The new rule will be with 10 laps or less to go all lapped cars will drop to the back of field a lap down. “The problem wasn’t the lapped cars not wanting to be there or the other lead lap cars passing them, it was the lapped cars were trying to go around the leader and get their lap back which isn’t allowed. If a driver wants to surrender their position on the track, they need to fall to the back of the pack and will be placed a lap down.”

For rule updates you can visit the track’s official website at www.bpspeedway.com. The next event will be on Sunday, April 14 when the URC Sprint Car Tour invades the 5/8 joining the Spirit Auto Center Big Blocks and South Jersey Overhead Door Crate/Sportsman.