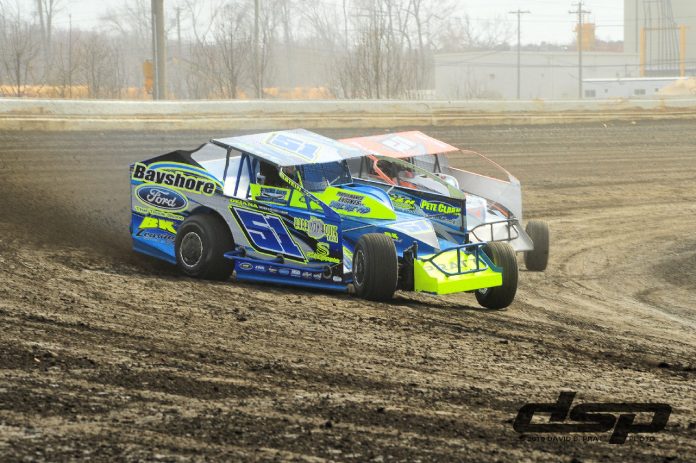 BECHTELSVILLE, PA – After finishing second to Kyle Busch, by a narrow margin, last Friday in the nationally televised NASCAR Truck Series race at Texas International Speedway Stewart Friesen will be looking to move up one spot and win the VP Racing Fuels Bruce Rogers Money Maker Memorial at Grandview Speedway on Saturday, April 6. In fact Friesen, one of the winningest racers in dirt track Modifieds, is the defending champion of the race.

And also adding his name to the list of entries for $7,500 to win 50-lap Big Block vs Small Block Modifieds event is New Jersey racing standout Richie Pratt Jr.

Add these two names to the long list of entries set to compete for a starting spot in the Rogers Memorial on Saturday and you have the makings of a fantastic night of dirt track racing action. A big attraction for racers, in addition to the big bucks to win, is the fact that everyone making the race will earn at least $1,000 out of the close to $50,000 in prize money.

In addition there is the $500 in Hard Charger money posted by Bob Hilbert Sportswear of Boyertown and even if a racer does not make the main event there is $1,000 posted by American Racer, the tire supplier, to be divided by four non-qualifiers. That will be done by luck of the draw.

RACERS ARE REMINDED THAT W-9 tax forms must be turned in at the track pit office before any money will be paid out. Forms are available at www.grandviewspeedway.com under rules and forms.


New York standouts Danny Johnson and Matt Sheppard (according to his fan page), two of the very best traveling dirt track racers, have added their names to the growing list of talents planning to be part of the April 6th action.

Billy Pauch Sr., a big winner in the past at Grandview, is coming off an impressive victory last Saturday at nearby Bridgeport Speedway. He will be looking for his second win in as many outings. Other standout dirt track performers such as Ryan Watt, Rick Laubach, Michael Maresca, Brett Kressley, and others will challenge many of the Grandview regulars such as Duane Howard, Mike Gular, Jeff Strunk, Craig Von Dohren, Doug Manmiller, Tim Buckwalter, Mike Laise, Ron Kline, Jared Umbenhauer, Frank Cozze, Ray and Stan Swinehart and a host of others.

A full series of qualifying events will lead up to the main event, a 50-lapper, with the winner going home with $7,500 and the prestige of being the top performer in the classic. In addition each qualifier for the main event earns a very impressive $1,000 or more.

The popular Sportsman stock cars will make up the second part of the doubleheader show with $750 guaranteed for the winner and $125 for each feature starter.

A drivers meeting will take place at 5 pm with all cars signed in by 5 pm. The drawing for qualifying heat starting positions takes place at 5:30 pm. And hot laps for the racers start at 6 pm.

Adult admission will be $28 while youngsters 6 through 11 pay just $5. Kids under six are admitted FREE. Pit fee is $35. The rain date is set for Saturday, April 13th.

Spectator gates will open at 5 p.m.

Fans arriving early can meet Doug Manmiller at the Low Down & Dirty Meet and Greet near the main entrance between 4 and 5 p.m. Many drivers are expected to have t-shirts on sale at the same time. 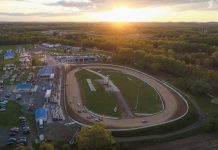