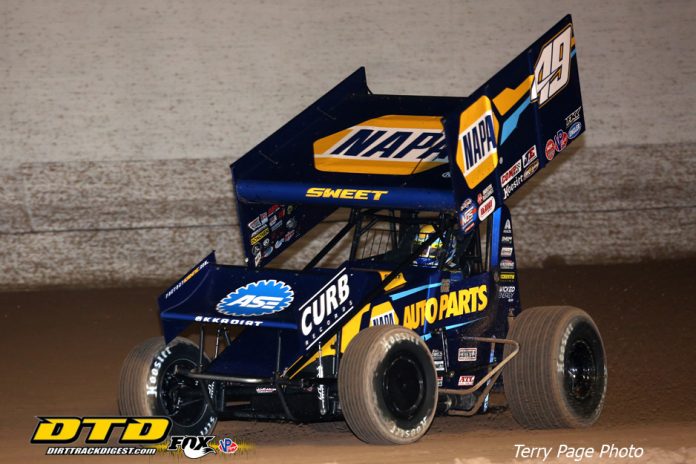 Sweet had command of the race, having stolen the lead from Ian Madsen just before a Lap 19 caution. However, Madsen did not let the blue Kasey Kahne Racing car of Sweet out of his sight.

With lap traffic in Sweet’s windshield, Madsen used it to his advantage turning a car length distance between them into half a car length. Then a quarter. The laps were winding down in a hurry, but the race was far from over.

That is until the lap traffic that was helping Madsen catch Sweet, ended up killing his momentum with a lap to go, putting more than a car length back between he and Sweet, who went on to claim his first win of the 2019 season – his 35th career win overall.

“I was just kind of lucky to get through a few of those guys, just mistakes in lap traffic and we were in the right spot to capitalize,” said Grass Valley, Calif. native Sweet. “The car was superfast and made the opportunities for us to take advantage of those opportunities.”

His night didn’t start off looking like he would claim his second win at the raceway – his first coming in 2014. He broke down at the start of Hot Laps, but his KKR team got him back on track in time for Qualifying, ending up fifth. Sweet then went on to finish second in his Heat race – to winner Madsen. However, he then struggled in the DIRTVision Fast Pass Dash, finishing last.

That resulted in Sweet starting sixth for the 30-lap Feature, while Madsen, who fared better in the Dash, started on the outside pole.

When the green flag flew, Madsen, last year’s Rookie of the Year, shot by polesitter Donny Schatz and ran away with the lead.

“Everyone’s always better in clean air,” said Madsen, who ended up second. “It just kind of got pretty tricky there in the middle of the race. We got stuck behind some lap cars and we just weren’t as good as Brad tonight to maneuver around to get past the lap cars.”

Madsen’s blistering pace at the start of the race put him in lap traffic by Lap five. While the Australian hustled his way around the slower cars, Sweet – with a little bit of luck on his side – methodically moved his way to the front, lap by lap.

“I think we were in the right place at the right time a lot of the time and we were able to capitalize,” Sweet said. “Coming from sixth to win is hard in these things, especially on a pretty fast track. We’ll take it any way we can get it.”

Luck wasn’t the only factor that helped him to the front. A little bit of skill, knowing where to put his car helped, too.

“Luckily for me, I kind of found a low line in turn one, and kind of low down the front stretch,” Sweet said. “If I could get off (turn) four equal or a little better than the guy in front of me, I could go low in turn one and it seemed like I could carry more speed. That’s where I made all of my passes.”

While Sweet and Madsen stole the show, Brent Marks raced his way to his best finish so far this year – sixth. Prior to that his best finish this year had been 11th in Las Vegas. After that he missed two races and had finished no better than 12th. But now, momentum is on his side going forward.

“I know my results through California don’t really show, but we’ve been getting our car really good,” said Marks after his first race at USA Raceway. “We’ll just keep plugging away and fine tuning this race car and try to have a little bit better luck on our side. Excited we got a good run tonight.”

Sweet is the ninth different winner this season in 10 races. Both Madsen and third-place finisher David Gravel, claimed a victory during the Series’ March California swing. While Sweet didn’t claim a victory during the swing, he had one of the best performances during it. He finished in the top-10 in all five races – four of them top-five finishes. And had the best average finish of 4.4.

“It’s nice to get the first win and hopefully we can carry the momentum going forward,” Sweet said. “It’s a long season. We’re 10 races into a 94-race schedule, so hopefully this is good signs to come for us.”

The Greatest Show on Dirt will make its next stop Saturday, April 6, at Arizona Speedway in Queen Creek, Ariz.